Damian Hale is a wealthy real-estate businessman who is diagnosed with terminal cancer. Unwilling to die, Damian explores an expensive and highly secretive procedure known as shedding. During shedding, Damian’s consciousness is transferred into the body of healthy young man, rumored to be grown for him. However, Damian soon begins to have weird hallucinations that cause him to believe that neither the body, nor the company that gave it to him, are truly what they seem. 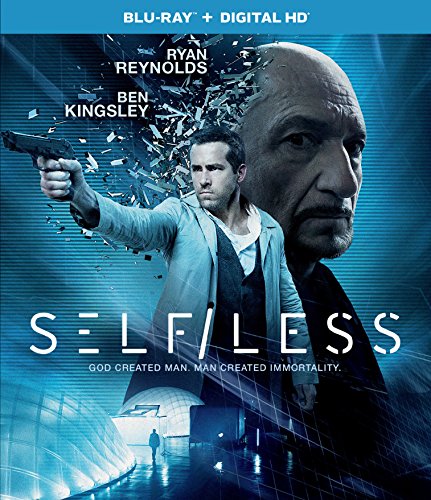 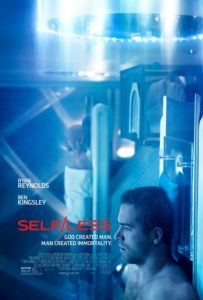 Damian Hale (Ben Kingsley) is a billionaire diagnosed with terminal cancer who does not want to see his life come to an end. Damian is estranged from his only daughter, Claire Hale (Michelle Dockery), who he has tried to make amends with by offering her large amounts of money for her charity work. After a lunch meeting with his close friend Martin O’Neill (Victor Garber), Damian finds a mysterious business card directing him to a Professor Albright (Matthew Goode). Damian sets up a meeting where Albright describes a new medical procedure called shedding. During shedding, a person’s consciousness is transferred to an artificially grown body. Damian agrees to the procedure and pays an enormous sum of money to Albright. Before faking his own death and proceeding with the procedure, Damian stashes some credit cards and documents in a New Orleans cemetery. Damian then undergoes the shedding.

Damian awakens in a much younger body (Ryan Reynolds). For a few days, he stays within the medical facility, getting used to his body and his new medicine routine. Once acclimated, Damian begins his new life in New Orleans under the new name of Edward Kidner. He quickly becomes friends with a neighbor, Anton (Derek Luke), who begins taking him out and exploring the night life of New Orleans. Damian engages in a lot of sex and drinking and forgets to take his medication. Damian starts to hallucinate of a woman and a child. He contacts Albright, who dismisses the hallucinations and increases Damian’s medication. However, Albright accidentally mentions details of the hallucinations that Damian did not reveal which causes the billionaire to be suspicious.

Albright proposes a change of scenery and arranges for Damian to take a vacation in Hawaii. However, Damian conducts his own investigation into the hallucinations and identifies a water tower that he saw in the hallucination as one that exists near St. Louis. Damian diverts to St. Louis instead of Hawaii and travels to a small farmhouse where the water tower is nearby. Once there, he finds a woman, Madeline (Natalie Martinez), who reacts to him as her apparently deceased husband Mark. He learns that Mark sold himself to Albright to pay for a life-saving treatment for his daughter Anna (Jaynee-Lynne Kinchen). Suddenly, Madeline and Damian are attacked by Albright’s men, including Anton. Seemingly remembering Mark’s combat training, Damian kills Anton and the other henchmen. Damian then takes Madeline to collect Anna from her school. The trio then goes on the run.

Death, has some, side effects. Albright (Matthew Goode)

At a motel, Damian uses a laptop to research shedding and discovers that Dr. Francis Jensen (Thomas Francis Murphy), now deceased, theorized shedding and pioneered the research in the field of transhumanism. Damian speculates that Jensen shedded his body into that of his research assistant Albright. Damian goes to visit Jensen’s widow, Phyllis (Sandra Ellis Lafferty), in a nursing home where she is being treated for Alzheimer’s. Phyllis remembers nothing, but Damian lures Albright to the facility to see her. Albright reveals to Damian that he was in fact Jensen. He also reveals that the pills that Damian takes will eventually eliminate Mark’s personality entirely. However, Albright also warns Damian that if he stops taking the pills that Mark’s personality will emerge, and Damian’s consciousness will disappear forever.

Multiple henchmen capture Damian and attempt to lead him out the back of the facility. Madeline sees the men and goes to help Damian. She shoots one of the attackers who turns out to be Anton in a new body (Brendan McCarthy). Anton tells Damian that he has shed multiple times. Damian takes Anton’s pills before letting the man go.

Damian, Madeline, and Anna head out on the road again. Madeline confronts Damian on his inability to remember personal details about their relationship. Damian confesses everything to Madeline and expresses his desire to set it right. Damian takes Madeline and Anna to Martin’s house. Damian convinces Martin that he is his old friend. He asks Martin to arrange for Madeline and Anna to be taken safely to the Caribbean. While Martin makes arrangements, Damian bonds with Anna and teaches her to swim. When Damian discovers Anna playing with Martin’s previously deceased son Tony (Dylan Lowe), Martin confesses that he too used shedding to bring back his son. He also admits to contacting Albright and notifying him that Damian was at the house. Damian explains that the new bodies in shedding are not grown but are preexisting people. Martin agrees to help Damian escape.

Damian plans to distract Albright’s men by taking Martin’s Range Rover. Meanwhile, Martin takes Anna and Madeline on foot out the back door. Damian leads the henchmen away and has a violent car chase. As a result, Anton’s new body is fatally injured. The other henchmen realize that Damian is alone and turn around to pursue Anna and Madeline. The girls are captured when they attempt to flag down a car for help, unaware that it contains Albright’s men.

Damian becomes determined to save Anna and Madeline. He stops taking his pills to experience Mark’s memories, which reveal that Albright has a lab in an abandoned warehouse. Damian infiltrates the lab, but he is captured by Albright. Albright informs Damian that he plans to shed Anton’s mind into Mark’s body. Damian remembers that metal interferes with the shedding process and hides a bullet casing in his mouth. As a result, the shedding process destroys Anton’s consciousness and allows Damian to impersonate the killer. He frees Madeline and Anna. The trio attempt to escape the facility. Albright tells Damian that he needs Albright to survive since only he has the pills. Damian reveals that Martin reverse-engineered the pills and gave the formula to Damian. Damian then kills Albright with a flamethrower. Afterwards, Damian has Martin complete Madeline and Anna’s escape to the Caribbean.

A short time later, Damian visits his estranged daughter Claire one last time in New York. He does not reveal his identity, but he does provide her with a letter from her father which reconciles Claire with her dad. Damian then travels to the Caribbean and stops taking his medicine. The real Mark eventually re-emerges and finds a video message from Damian that thanks him for the time that he gave to him. Mark leaves the hotel room and reunites with his family along the beach.