When a horse jockey turns up dead, the murder puts a cramp in Nick and Nora’s hopes for a pleasant afternoon at the local race track. Nick’s friend Lt. Abrams wants him to help out, but Nick is too busy enjoying the good life to be bothered. However, when Major Scully asks him to look into corruption and the role of organized crime in gambling, Nick joins the investigation. After several more murders occur, Nick gathers everyone into the same room to reveal the true identity of the killer. 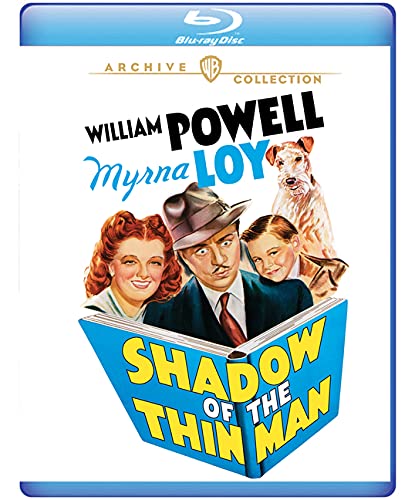 Shadow Of The Thin Man (blu-ray) The fourth Thin Man movie begins with Nick (William Powell) and Nora (Myrna Loy) Charles in San Francisco, California on the receiving end of a slow speed police escort to the local racetrack after a motorcycle cop (Edgar Dearing) pulls Nick over for speeding. By the time they arrive, the place is crawling in cops after someone found a jockey dead in a shower stall from a gunshot wound. Foul play is suspected because the jockey refused to co-operate with two racketeers, Fred Macy (Joseph Anthony) and Link Stephens (Loring Smith), who are suspected of fixing races and taking illegal bets. Police Lieutenant Abrams (Sam Levene) is in charge of the investigation and he tries to get Nick to help him with the case, but Nick claims he’s retired.

Intrepid reporter Paul Clarke (Barry Nelson) is there and he gets into a scuffle with another reporter named Whitey Barrow (Alan Baxter) as he questions jockeys. Paul’s working with Major Jason I. Sculley (Henry O’Neill), a deputy director of the racing commission, who is investigating Macy and Stephens for criminal activity. They’d like Nick to join the case, but he turns them down. Nick claims he’s retired.

Paul’s fiancée, Molly (Donna Reed ), is Stephens’ secretary, and he takes her keys so he may search Stephens’ office that night. He finds a black notebook that Stevens keeps under lock and key which has a record all of the bets, names, and dirty deeds the racketeers are involved with. Whitey who is on Stephens payroll (and in desperate need of $8,000.00) arrives with a gun in his hand. He tries to steal the book so he can get more money out of Stephens. The two men scuffle, and Paul knocks Whitey unconscious.

Paul goes to leave with a laundry list he took from the notebook, but when his back’s turned, someone knocks him unconscious with Whitey’s gun that slid out of the office in the melee. The unknown assailant then shoots Whitey dead and tosses the murder weapon as Paul’s unconscious body. While no one sees the killer, a nightwatchman spots small-time criminal, Rainbow Benny (Lou Lubin), running down the building’s stairs immediately afterward.

Lieutenant Abrams arrives as does Nick and Nora during their night on the town watching professional wrestling at Macy and Stephens’ arena. The two find themselves in the thick of the murder investigation when the police arrest Paul and Molly—who’s now there too—for murder. Molly being an accomplice since she admitted giving Paul the keys to her office.

Nick returns to the showers where the jockey was found and searches the stall’s drain. He finds a gun stuck in it and figures the jockey’s death was an accident when he put it down the drain barrel up. It accidentally went off and the shot killed him. When Nick gives Lieutenant Abrams the gun at the station, they call the press in and Nick tells them the same person who killed the jockey also Whitey. Nick believes this will force the murderer to make a revealing mistake. As part of his declaration to the press, Nick says Paul and Molly are no longer suspects, and Lieutenant Abrams releases them.

When Stephens’ ticket seller, Maguire (Will Wright), gives Nora a tip that Macy’s alibi is bogus from the night of the murder and that he saw Whitey arguing with a woman named Claire Porter (Stella Adler)—Stephen’s British socialite girlfriend—before his murder, Nick decides to pay Claire a visit. He gets Claire to admit she not only knows Whitey, but she was with him before his death. Nick knows she’s not telling him the complete truth, but leaves when she kicks him out of her apartment.

Nick then heads over to Whitey’s apartment to look for any sort of clue. With Asta’s help, he finds a small, thin box with a diamond bracelet hidden in a radiator pipe. As he finds it, someone else arrives to Whitey’s place and he hides. It’s Claire and she’s looking for something. However, she only finds Nick hiding in the closet.

He shows the box to Claire and reveals the bracelet which is hers. Whitey took it during her argument the night of his murder because he was blackmailing her for some unknown reason. He needed $8000 to cover gambling debts owed to Rainbow Benny and when she could no longer come up with the money he asked for, she gave him the bracelet.

Claire manages to snatch the box and run off before Nick can take chase (if he even wanted to chase her in the first place). Claire jumps into her car where her chauffeur, Baku (Noel Cravat), waits for her. As he drives off, she opens the box to find it’s empty. Up in Whitey’s apartment, Nick shows the bracelet to Asta and heads out himself.

That night, Nick and Nora take Paul and Molly out for dinner at Mario’s Grotto. While they want lobster, the waiter (Jimmy Dime) strongly suggests they get sea bass. The group orders 4 sea bass before Asta runs off to the bar. When Nick goes to retrieve him, he finds a very nervous Rainbow Benny eating there (lobster; not sea bass).

Nick casually questions Rainbow and mentions that the nightwatchman said he saw him leave right after Whitey’s death; even though the watchman couldn’t really ID him. Nick questions him about the $8,000 Whitey owed him. As it looks like Benny is going to pull a gun, Nick grabs him to find that Benny is wearing a bulletproof vest. When he questions Benny further, Benny quickly pays his tab and runs off. Asta takes chase, causing a waiter to spill soup over some customers. A huge brawl then breaks out at the restaurant, and Benny slips out the front door in the confusion.

Nick heads to a quiet table at the restaurant with Asta to think when Nora, Molly, and Paul sit down with him. Nick wants to find out where Benny lives, and Paul calls Major Sculley to see if he knows. Sculley says he will get right on it. Lieutenant Abrams arrives to Mario’s Grotto and tells Nick that Claire Porter is really an ex-con named Clara Peters. Nick figures that’s what Whitey was blackmailing her for.

Major Sculley shows up to tell them he can take the men to Benny’s apartment. He knows the way because he’d visited Benny there the week before. He takes them to room 25C only to find Benny hanging from a rafter dead from an apparent suicide. However, Nick quickly notes Benny died from strangulation and says it was doctored up to look like a suicide.

At this point, Nick has a pretty good idea who the murder is but still isn’t 100% sure. He has Lieutenant Abrams gather all suspects in the police station in hopes one of them will make a mistake during one of his world-famous accusatory speeches… and of course, someone does!

With the door locked and a room full of suspects and police officers, Nick questions all the principle suspects, but no one seems to break. Stephens does admit he was at Benny’s place right before the murder, but left when someone approached. So Nick calls the janitor at Benny’s apartment building, and learns that Benny just moved to the new room in his building three hours before his death.

Whoever knew his new room number must be the murderer, and since Stephens admitted being there and Major Sculley led the men straight to Benny’s new room, Nick implicates both men. Nick accuses Major Sculley of being the killer and using his investigative position with the commission not to bust Stevens, but to cover for him and profit from it alongside Stephens and Macy. He then set up his friend Paul to take the fall.

Seeing that there is no escape, Major Sculley grabs Nicks gun and vows to take everyone down with him. Nora jumps on him to protect Nick, but Major Sculley overpowers her. This distraction is all the time the police need to wrestle the man to the ground. A relieved Lieutenant Abrams takes possession of the gun only to find Nick hadn’t even loaded it. Nick hasn’t carried a loaded weapon for over three years since Nicky Jr. was old enough to grab it. Nick then gives Nora a diamond bracelet of her own for a happy ending.