In the 25th film of the Marvel Cinematic Universe, Shang-Chi is a seemingly ordinary parking valet until he and his best friend Katy are attacked by a group of assassins from Shang-Chi’s estranged father’s criminal organization. Now, Shang-Chi sets out on a quest to warn his sister, Xialing, of the potential danger from their father, and is placed on path that leads Shang-Chi to unleash his true power and potential. Both of which Shang-Chi will need to stop his father and save the world. 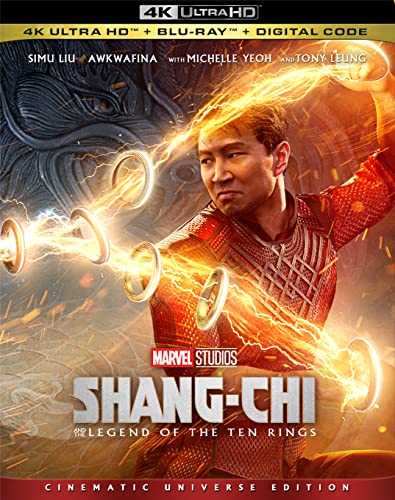 Shang-Chi and the Legend of the Ten Rings [4K UHD]

‘Shang-Chi and the Legend of the Ten Rings’ Movie Summary 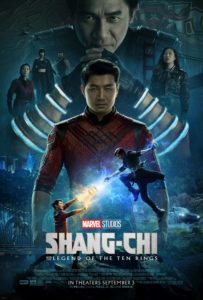 In the 11th Century, Xu Wenwu (Tony Leung) discovers the mystical Ten Rings which grant their owner immortality and god like powers. Wenwu establishes the Ten Rings crime organization. He uses the Ten Rings and his organization to conquer kingdoms throughout Asia and continually topples governments throughout history. However, in 1996, Wenwu begins a search for Ta Lo, a legendary village that reportedly harbors mythical beasts. He travels through a magical forest to what he believes is the village entrance. Once there, Wenwu is stopped from entering by a solitary guardian named Ying Li (Fala Chen). Li fights Wenwu to a standstill. Wenwu falls in love with Li who eventually returns his affections. The Ta Lo villagers reject Wenwu, so Li chooses to leave with him rather than face a life without the love of her life. The two marry and have two children, Shang-Chi (Jayden Zhang) and Xialing (Elodie Fong). Wenwu gives up his crime organization and locks away the Ten Rings.

Years later, Wenwu’s home is invaded by a group of assassins known as the Iron Gang while Wenwu is away. Li defends her children and is killed. Wenwu once again takes up the Ten Rings to seek his revenge against the Iron Gang. He kills the Iron Gang and resumes his leadership over the reborn Ten Rings organization. Wenwu makes Shang-Chi undergo brutal training in martial arts. At the same time, Wenwu prevents Xialing from participating in the same training due to her being a woman. Xialing watches Shang-Chi’s training and practices on her own. When Shang-Chi (Arnold Sun) is fourteen years old, Wenwu sends his son to assassinate the Iron Gang’s leader. Shang-Chi completes the mission but is traumatized by the experience. Rather than returning home, Shang-Chi runs off to San Francisco and takes on the new name of Shaun.

In the present day, Shang-Chi (Simu Liu) works as a lowly parking valet with his friend Katy (Awkwafina). Shang-Chi keeps his origins secret from everyone, including Katy. One day, Shang-Chi and Katy are attacked on a bus by a Ten Rings team led by an assassin named Razor Fist (Florian Munteanu), a man with blades for hands. The Ten Rings team steals a pendant from Shang-Chi that was given to him by Li. Shang-Chi becomes concerned about his sister and flies to Macau with Katy to warn Xialing that the Ten Rings may come looking for her and her matching pendant. During the trip, Shang-Chi informs Katy about his past. Once in Macau, they find Xialing (Meng’er Zhang) running an underground fight club where super-powered beings such as Wong (Benedict Wong) and Abomination (Tim Roth) combat each other. Xialing informs Shang-Chi she escaped their father’s care when she was sixteen after Shang-Chi failed to come back for her. The fight club is attacked by the Ten Rings, and Wenwu arrives and captures Shang-Chi, Xialing, and Katy.

I know you don’t like to talk about your life, but a guy with a freaking MACHETE FOR AN ARM just chopped our bus in half! Katy (Awkwafina)

Wenwu takes the group to the secret Ten Rings’ base. Wenwu uses the two stolen pendants and explains that they reveal a map leading to the entrance to Ta Lo. Wenwu explains to his children that he heard Li calling to him from beyond the grave and concluded that she is being held captive in Ta Lo behind a mysterious sealed gate. Wenwu announces his intentions to free Li and if the citizens of Ta Lo stand in his way, he will destroy them. Shang-Li and Xialing object to his plans so Wenwu locks them up. While imprisoned, the trio meet fellow prisoner and former actor Trevor Slattery (Ben Kingsley), a man that Wenwu imprisoned after he impersonated Wenwu during the events in Iron Man 3. Slattery has a mysterious animal companion known as a hundun. The hundun, known as Morris (Dee Baker), offers to guide them all to Ta Lo. Slattery offers to function as the interpreter for the animal.

The trio successfully escapes and makes it to Ta Lo. The mythical land exists in a separate dimension and contains various Chinese mythological creatures, including dragons. Upon arrival, Shang-Li and Xialing meet their maternal aunt, Ying Nan (Michelle Yeoh). Nan explains that thousands of years ago, the universe containing Ta Lo was attacked by the soul-consuming Dweller-in-Darkness and its loyal soldiers. Ta Lo was saved by a Chinese dragon called the Great Protector who sealed the Dweller behind that Dark Gate, locking the evil spirit in his own world. Nan theorizes that the Dweller has been impersonating Li to deceive Wenwu into using the Ten Rings to open the gate. Shang-Chi, Xialing, and Katy join the village in preparing to stop Wenwu’s eventual assault. Nan specifically trains Shang-Chi to unlock his ability to stop his father by using his mother’s training.

Eventually, Wenwu arrives with his men. Shang-Chi attempts to reason with his father, but ultimately, Wenwu unleashes his forces on the village while he proceeds to the gate himself. Shang-Chi is knocked into a nearby lake by his father who then attacks the Dark Gate with the power of the Ten Rings. Wenwu creates cracks in the Gate and several of the Dweller’s minions escape. The evil spirits steal the souls of several of the combatants, Ten Rings and Ta Lo citizens alike. The humans decide to join forces to fight the Dweller and his army. In the lake, the Great Protector revives Shang-Chi and bears him to battle the Dweller’s forces. Wenwu and Shang-Chi fight again, but this time, Shang-Chi uses his mother’s training to get the upper hand over his father. When Shang-Chi has his father at his mercy, he chooses to spare Wenwu.

Suddenly, the Dweller breaks through the weakened Dark Gate. The Dweller attacks Shang-Chi who is saved by his father’s intervention. Before being killed, Wenwu bequeaths the Ten Rings to Shang-Chi. Shang-Chi rejoins with the Great Protector and joins forces with Xialing, Katy, and the citizens of Ta Lo to kill the Dweller. In the aftermath, Shang-Chi and Katy decide to return to San Francisco while Xialing returns to the Ten Rings compound to dismantle her father’s criminal organization.

In the mid-credits scene, Katy and Shang-Chi are at a bar telling their friends about their adventure. Their friends are skeptical until Wong suddenly appears in the bar using a magical portal. Wong tells Shang-Chi and Katy to follow him. Wong takes them to Kamar-Taj and introduces them to holographic images of Bruce Banner (Mark Ruffalo) and Carol Danvers (Brie Larson). Banner and Danvers discuss their research into the Rings’ origin and alert Shang-Chi that the Rings are acting as beacon to something in the universe. At the conclusion of the meeting, Wong welcomes Shang-Chi and Katy to the team.