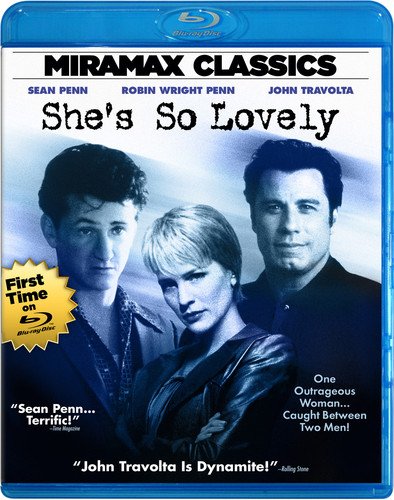 Echo Bridge Entertainment has announced that they are bringing drama She’s So Lovely to Blu-ray for the first time as part of their Miramax Classics Collection. The film is directed by Nick Cassavetes and based upon a script written by John Cassavetes.  She’s So Lovely stars Sean Penn, Robin Wright, John Travolta, James Gandolfini, Henry Dean Stanton, and Debi Mazar.  The film will debut on Blu-ray and be available in stores on May 7, 2013.

In the film, Maureen (Wright) is pregnant and her husband Eddie (Penn) is missing.  Nervous, Maureen shares a couple of drinks with neighbor Kiefer (Gandolfini), who tries to rape her and then beats her.  When Eddie returns and finds his wife bruised, he goes ballistic, shoots a paramedic and is put in a psychiatric institution.  Ten years later, Eddie is released and finds that Maureen has divorced him and is remarried with three children, one of whom is his little girl Jeanie.  Eddie goes to reclaim his wife and his life.

She’s So Lovely was released in August of 1997 and grossed over $7 million at the box office.  Exact technical specs and supplemental features to be included with this upcoming release are yet to be officially detailed.

Disclaimer: Affiliate links are contained in this post. This means when you click a link, and purchase an item, Movie House Memories will receive an affiliate commission. Advertisers and Affiliate Partnerships do not influence our content. See our Terms of Use about the inclusion of affiliate links on this site for more information.
February 10, 2013
1 minute read
Show More
Back to top button
Close
Close