In a swamp near the land of Far, Far Away lives a terrifying green ogre by the name Shrek. Shrek enjoys his swamp and his privacy, but he soon finds both invaded by a group of fairy tale creatures who are hiding from the forces of Lord Farquaad. To get his swamp back to himself, Shrek agrees to retrieve Princess Fiona for Lord Farquaad so that the villain can marry the imprisoned royal. However, Shrek soon finds that living alone in his swamp may not be all that he treasures as he begins to fall for Fiona during their journey together. But, how could a princess ever fall in love with an ogre? 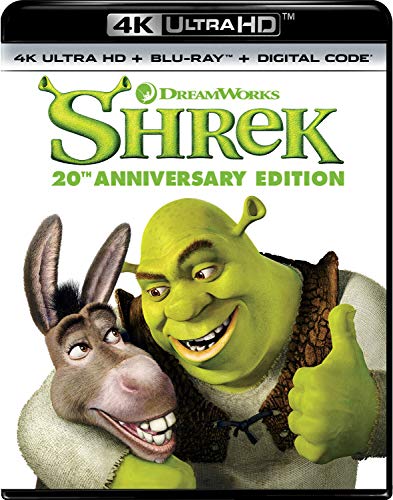 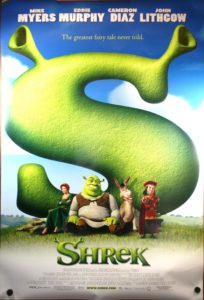 Shrek (Mike Myers) is a large, temperamental, green ogre who lives in the swamp. He is extremely anti-social and prefers to keep to himself in his swamp. He fears none of the nearby townspeople who are generally frightened of Shrek based on his mere appearance. Shrek’s life is turned upside down when the dwarfish Lord Farquaad (John Lithgow) of Duloc unknowingly exiles a large number of fairy-tale creatures into Shrek’s swamp. The creatures hide in the swamp to avoid detention by Farquaad’s soldiers. One of the creatures is an annoying, talking Donkey named Donkey (Eddie Murphy). Shrek wants his privacy, so he sets out to get Farquaad to clear his swamp of the creatures. Donkey decides to tag along and guides Shrek to Duloc.

Meanwhile, Farquaad is presented with Snow White’s Magic Mirror (Chris Miller), who informs the diminutive poser that to become a true king, he must marry a princess. Farquaad chooses Princess Fiona (Cameron Diaz), a princess who is imprisoned in a castle tower guarded by a dragon. However, Farquaad is a coward and unwilling to perform the task himself. Farquaad decides to put on a tournament to find the strongest and most worthy who will have the honor of rescuing Fiona for Farquaad. Shrek and Donkey arrive during the tournament, and Shrek easily defeats the other competitors. Farquaad proclaims them champions and orders Shrek and Donkey to rescue Fiona. Shrek agrees if Farquaad will remove all the fairytale creatures if he succeeds on the quest. Farquaad accepts Shrek’s terms.

Shrek and Donkey make the long quest to the abandoned castle where Fiona is held. Once there, they are attacked by the Dragon, who corners Donkey. Donkey quickly sweet talks the Dragon, who turns out to be a female and falls in love with him. At the same time, Shrek finds Fiona. The princess is put out by the lack of romanticism that Shrek displays towards her. She is even more flabbergasted to learn that Shrek has not slain the dragon. The pair flee the castle after rescuing Donkey. Once safely away, Shrek removes his helmet and reveals himself as an ogre to Fiona. The princess is disappointed in her savior and demands to be returned to the castle and orders Shrek to tell Farquaad to come rescue her himself. Shrek rejects both of her requests and forcibly carries her against her will.

That night, the trio set up camp. Fiona decides to sleep alone in a cave. Over the campfire, Shrek confides in Donkey his frustration with being constantly feared and rejected by all others over his monstrous appearance. Unbeknownst to Shrek, Fiona overhears his conversation and decides to be kind to Shrek. The next day, the trio encounter “Monsieur” Robin Hood (Vincent Cassel) and his band of Merry Men. The bandits attack, and Fiona handles them easily with martial arts straight out of a Matrix film. Shrek is surprised and impressed with Fiona. The two secretly begin to fall in love with each other.

The trio stops for the night when they are day’s journey from Duloc. Fiona hurriedly takes shelter in a windmill for the evening. Donkey enters the windmill alone and discovers that Fiona has transformed into an ogress. Fiona sadly explains that since she was a small child, she has been cursed to transform into an ogress every night after sunset and reverts to her human self at sunrise. Fiona explains that only “true love’s kiss” can break the spell and change her into “love’s true form.”

At the same time, Shrek works up the courage to confess his feelings to Fiona but overhears the conversation between Fiona and Donkey. He misunderstands Fiona’s comments about herself as an ugly beast and believes she is referring to him. Shrek angrily leaves and returns the next morning with Lord Farquaad. Fiona is confused and hurt as to Shrek’s sudden hostility towards her. She accepts Farquaad’s marriage proposal and requests they be married before nightfall. Shrek ditches Donkey and returns to his swamp alone.

Donkey refuses to give up on Shrek and follows the ogre to his swamp. Donkey confronts the angry Shrek, and the two friends fight. Donkey explains that the ugly beast comment by Fiona was referring to someone else, and Donkey and Shrek reconcile. Donkey urges Shrek to go to Fiona and express his true feelings for her before she marries Farquaad. The Dragon arrives, and Shrek and Donkey use her to travel quickly to Duloc.

Shrek arrives at the wedding and interrupts the ceremony just before the end. Shrek tells Fiona that Farquaad is only marrying her so that he can become king. At that moment, the sun sets, and Fiona transforms into an ogress in front of everyone, including Shrek. Shrek finally understands what he heard at the windmill. Farquaad is outraged at nearly marrying an ogress and orders Shrek to be executed and Fiona arrested.

At that moment, the Dragon arrives, guided by Donkey, and devours Farquaad. The people of Duloc are delighted by the short man’s demise. Shrek and Fiona profess their love for one another and share a kiss. Magic happens and Fiona assumes love’s true form, which is the form of an ogress. Fiona believes that she is no longer beautiful until Shrek consoles her and tells her that she has always been. They marry in the swamp with all the fairy-tale creatures in attendance before leaving for their honeymoon.