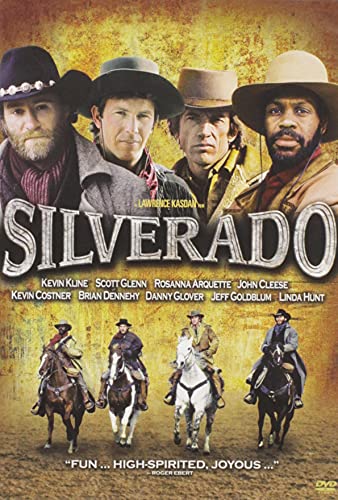 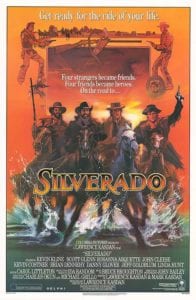 Silverado starts off with an ambush in a remote shack. Emmett finds Paden walking in his draws through the desert. Paden was robbed and left for dead by some cowboys with sticky fingers. Emmett and Paden head to Turley, where Emmett’s brother, Jake, is scheduled to be hanged for shooting a man.

In Turley, Paden finds his horse, accompanied by the horse thief. Paden shoots the thief and recovers the horse after showing the proper registration on the underside of the saddle. Later, Paden is jailed for shooting another of the thieves for wearing his hat in public. Paden and Jake bust out of jail and flee with Emmett. Their escape is aided by the sharpshooting Mal, played by a Danny Glover, who, as luck would have it, was precisely the right age for that stuff.

The gang heads off to Silverado to say goodbye to Emmett and Jake’s sister before they to go California. Their sister’s husband runs the land office and informs the boys of a scheme by which local bad boy Irishman, Ethan McKendrick, is trying to run the honest people off of their land.

Meanwhile, Jeff Goldblum shows up in a western, along with Mal’s sister, to run an honest gambling game there in the town, with the blessing of the corrupt local Sheriff Cobb. As a part of their scheme, McKendrick’s men murder Mal’s father and steal his land.

Cobb and Paden are old friends, and Cobb gives Paden a job in the local saloon along with Stella, a tiny but honest barkeeper. When McKendrick’s men murder Emmett and Jake’s brother in law and kidnap their nephew, the gang decides they’ve had enough and set out for revenge.

McKendrick’s men act first, however, and drive Jake into hiding and give Emmett’s head a sound hoofing. The gang fights back and stampede McKendrick’s cattle and raid his ranch. They fight through the thugs, rescue their nephew, and Emmett pays back McKendrick’s head hoof for hoof. Paden settles with Cobb and shoots him in a draw in the street.

Everything wraps up nicely. Emmett and Jake leave for California. Mal and his sister rebuild their father’s homestead. Paden is named sheriff. And little Stella goes on to run an elementary school that would one day harbor a young boy in danger and the musclebound cop there to protect him at any cost.