In Skin Deep, Zach Hutton is a womanizer, a drunk, and a writer whose life is falling apart. While he’s in love with his ex-wife, he can’t stop chasing women for the life of him. Throw in some serious writer’s block frequent run ins with the law, angry ex-girlfriends, and jealous boyfriends, and Zach’s in it skin deep! 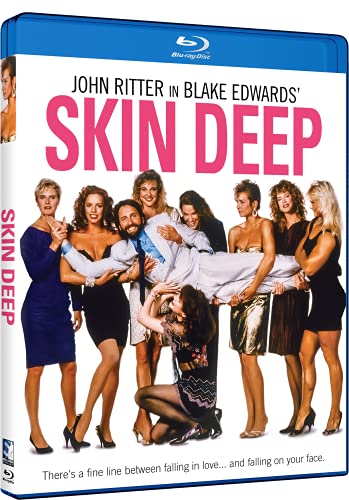 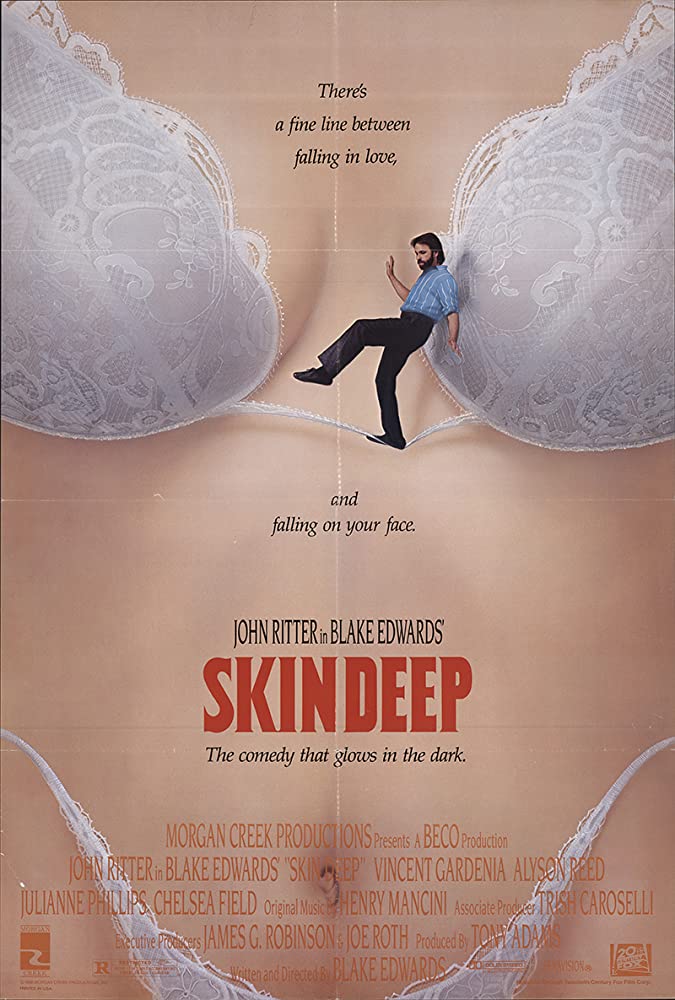 Skin Deep begins when Angie (Denise Crosby) catches her writer/boyfriend, Zach Hutton (John Ritter), having sex with her hairdresser at his mansion. This makes her a tad bit angry, so she grabs a gun from his nightstand, and confronts him. When she pulls the trigger, nothing happens. He immediately jumps out of bed, and grabs the gun from her. He always leaves the first chamber empty to avoid any accidents. As the wrestle in the bed with the gun, the hairdresser runs naked; screaming down the staircase. She passes Zach’s wife/reporter Alex (Alyson Reed) on her way out.

Zach heads to a bar called Barney’s where he has a heart to heart with the bartender, Barney (Vincent Gardenia). Of course Alex chucked him out; lock, stock, and typewriter over his affairs. However, Zach says while he wants to have a loving, faithful wife, he also wants to make love to everything in long skirts and bare feet.

Next, he heads to his lawyer’s office to talk to Jake (Joel Brooks). Jake says Alex’s divorce attorney is tough and she wants the house, the farm, their cars, and a $100,000 per year for five years as alimony.

Alex gets it all which drives Zach bonkers. He goes to visit a therapist named Dr. Westford (Michael Kidd). After one visit, Zach decides to make changes; he’s going to settle down, and stop chasing women. However, as he leaves the office, he spots a beautiful woman outside the building. He gets in his convertible, and drives alongside her as he leaves. While staring at her, he honks his horn at her, but rear ends a car from the distraction.

Coincidentally, there is a news crew for Alex’s station doing a story on gridlock. They film the young woman Zach honked at—a real estate broker/aspiring nurse named Molly (Julianne Phillips)—giving Zach mouth to mouth. On air, Alex looks annoyed and bets the woman will sell him a house.

Zach takes her home and the two try to have sex, but something’s wrong. This never happens to him! The next day, Zach goes back to see his therapist, and admits that he sometimes suffers from impotency. To him, not being able to screw is just as bad as not being able to write. After he begins crying, the doctor suggests he try writing again.

Later that night, Zach’s one-time agent, Leon “Sparky” Sparks (Peter Donat), and his lover, Curt (Don Gordon) throw a party at their mansion. Zach shows up with his date, Helena (Diana Barton), and while he didn’t originally plan on drinking that night so he would avoid arguments, Alex soon shows up with her son, Greg (Bo Foxworth). Sparky gives Zach some tough love, and chides him for being past his prime. Zach proceeds to get drunk.

Soon Molly moves in with Zach, and he hopes they have a good chance at a long-term relationship. In six months time though, Molly’s had it. She walks into the room where Zach is playing the piano, and lights it on fire. She gives him the finger and walks out. The fire spreads, and his mansion burns to the ground.

He pays Barney’s a visit, and there he meets a bodybuilder named Lonnie Jones (Raye Hollitt). He schmoozes her using the bar’s piano, and she takes him back to her place; a room in the back of her gym. Lonnie’s muscles intimidate Zach, but luckily for him, his cock is also scared stiff, and the two make sweet, sweet love.

The next day, Zach returns to his burnt down house to find Molly rummaging through its charred remains. She claims to be looking for some runes she had in her nightstand, but the two wind up arguing instead.

Next up, Zach then meets with Jake at a swanky restaurant. He lets Zach know the insurance company thinks the fire was set deliberately based on the firefighter’s initial report. He then offers Zach his condolences over Sparky’s death. However, Zach doesn’t know anything about it. We will eventually learn that he threw out his lover of 20 years, Curt, and then committed suicide because he had terminal cancer.

As Zach laments about his last conversation with Sparky, the words are barely out of his mouth when he spots a beautiful woman sitting alone. As he try to call Alex to tell her he’s changed, he flirts with the woman before sending her a drink. It arrives just as her rockstar boyfriend shows up. Stereotypically angry and jealous, Zach leaves before the rocker beats him up.

He returns to his hotel and tries to sleep, but a couple arguing in the bungalow above him wakes him up. So Zach complains to the front desk, and a few minutes later someone knocks on his door. He opens to find Amy and Rick (Chelsea Field and Bryan Genesse), the rocker couple from the restaurant, standing in the doorway. Rick bitches that Zach called the front desk AND hit on his woman at the restaurant. Amy steps in between the two, and ends her relationship with Rick.

Rick leaves to pack his things while Zach and Amy flirt in his room. She returns back to her room, and a little while later Zach calls her room. Zach invites himself up, and she agrees. Once there, the two decide to have sex. She asks him to wear a condom, but he doesn’t have any. She gives him one of Rick’s before turning out the lights. Turns out they are glow in the dark, and Zach’s is 5.5 inches of blue steel.

As they are about to do the dirty, they hear a door slam. Rick’s returned. Zach hides in the closet as Rick tires to have make-up sex. They argue, and Rick leaves again. Amy turns off the light again, and Zach comes out of the closet in his blue glory. Suddenly, Rick returns in the dark, and Zach hides again. This time, Rick is wearing nothing but a red glow-in-the-dark condom. He hears something and discovers Zach hiding.

As two men stand there, toe to toe and glow to glow, we see they are fairly evenly matched. However, one boy wants to fight, and the other wants to take flight. They romp around in the dark; blue and red bopping about until they fall to the ground with a thud. We cut to Jake, who’s sleeping at home with his wife. He tells her Zach was just arrested for cock-fighting.

The next day, Zach attends Sparky’s funeral. Alex is there as well, and initially, she refuses to talk to him. However, she invites him to dinner as she drives off. He arrives that night to find his mother-in-law, Marge (Nina Foch), stepson Greg, and Greg’s girlfriend, Rebecca (Jean Marie McKee) there too; just in time for a good-old awkward dinner. Afterwards, Zach and Alex have a drunk conversation where he asks her take him back. However, she thinks that he’s too scared to be monogamous.

Zach then gets even more drunk at Barney’s. Once it closes Zach calls Alex, and asks if she’s presently involved with anyone. She says yes, and that the relationship is serious.

As Zach’s downward spiral of fucking random women and not having to work continues, he returns to Dr. Westford’s office. The doctor wryly asks why Zach doesn’t know by now that’s it’s next to impossible to change one’s basic character. While Zach’s annoyed with that statement, the doctor is correct…Zach continues on with his womanizing ways. When he spots a beautiful woman on a billboard for Shape, he asks Jake to find out who the woman is. Jake replies that there’s a party for the magazine that night he’s attending, and Zach should come along.

However, Jake gets his event dates wrong, and tells Zach the event is a costume party when in reality, it’s a black-tie event. Embarrassed, Zach gets black-out drunk while everyone laughs at him. He makes a fool of himself, gets punched in the face, and arrested again.

We’re now back at Barney’s. Zach gets drunk yet again before calling Alex. When Greg answers the phone, and tells him that she’s gone for the weekend, he goes to Marge’s house. She refuses to tell him where Alex is, but Zach spots note that implies she’s in Santa Barbara. He steals the note with the Redford Palms address on it before accidentally sitting on her dog; possibly killing it. He puts the mutt in her luggage to hid his dirt deed, and leaves.

He then speeds off to Santa Barbara, where the Ventura County police arrest him for driving 134 miles per hour while drunk. The judge gives him a $500 fine and 30 days. He pays the fine and heads to Santa Barbara.

Once there, he finds Alex at the hotel’s arboretum getting married. When the minister asks if there are any objections to the marriage, Zach interrupts. However, Marge punches him in the stomach before he can say anything. The ceremony comes to a stop while Alex walks him back to his car. Before leaving, he tells Alex he always counted on her to save him, but she replies that she doesn’t have that kind of magic. He must save himself, and all Zach can do is drive away. When Alex’s fiancé asks her if they can get married now, she replies they need to talk.

At Dr. Westford’s office, Zach asks the doctor for suggestions on what to do. He replies that if an alcoholic asks him to cure him, he tells him first to stop drinking. Zach doesn’t get it, and the doctor tells him to go home and think about it. He does which is now a rented beach house. He goes outside to sit in the sand, and reflects on Dr. Westford’s parting words. Suddenly, he has an epiphany. All his problems are due to his being scared.

Zach returns to writing, and completes his first book in a long while after many months. At the launch party, everyone from the film is there, and are happy as can be. Alex is there too; she never married her fiancé, and he’s already moved on to another woman.

Zach tells Alex that in addition to writing his novel, he’s also quit drinking, and in his book, two out of three isn’t bad. However, in Alex’s book, two out of three isn’t good enough. He then says he’s been celibate for six months; no word on how many months more the book took to write. He then heads to the piano to play a ditty. While there, Rebecca sits next to him, and places her hand between his legs. She seductively asks him if he’s ever heard the story of the frog and the scorpion as the screen goes black.

We cut to the radio playing the Star Spangled banner as a red, white, and blue condom patriotically bounces in the darkness. Alex turns on the light to reveal Zach is sitting next to her. She turns them off again, and orders him to take off the condom. Happy endings for everyone.