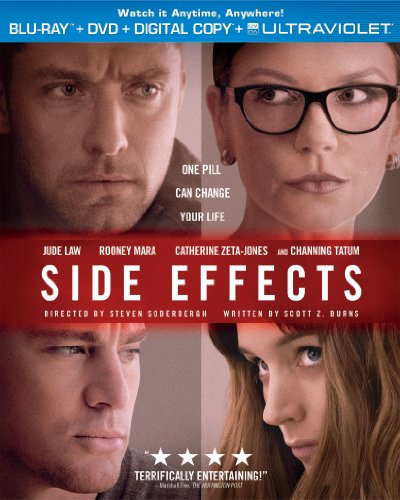 Universal Studios Home Entertainment has officially announced and detailed the Blu-ray/DVD/UltraViolet Combo Pack release of Steven Soderbergh‘s Side Effects. The film stars Jude Law, Rooney Mara, Catherine Zeta-Jones, and Channing Tatum. The screenplay was written by Scott Z. Burns. Side Effects will be available in stores and online beginning May 21st.

Side Effects is a provocative thriller about Emily and Martin (Mara and Tatum), a successful New York couple whose world unravels when a new drug prescribed by Emily’s psychiatrist (Law) – intended to treat anxiety – has unexpected side effects. Vinessa Shaw and Mamie Gummer co-star in the film.

The film was released in February of 2013 and grossed over $30 million at the box office.

The Blu-ray/DVD/UltraViolet Combo Pack will include several special features, including: Aliza Website Experience, Behind the Scenes of Side Effects featurette, Ablixa Commercial, Intenin Commercial, and an Ultraviolet version of the film.

Disclaimer: Affiliate links are contained in this post. This means when you click a link, and purchase an item, Movie House Memories will receive an affiliate commission. Advertisers and Affiliate Partnerships do not influence our content. See our Terms of Use about the inclusion of affiliate links on this site for more information.
March 22, 2013
1 minute read
Show More
Back to top button
Close
Close