A Japanese reporter is returning home in a plane when the craft is mysteriously effected by a beam of energy coming from a small island in the South Pacific. The plane alters course and drops the reporter off on the island to investigate. The reporter discovers the island actually contains a team of scientists who are working on a weather-controlling system, as well as a several giant monsters. However, when the mighty Godzilla arrives on the island, the scientists learn that the island actually contains additional secrets that may threaten not just the experiment, but the lives of every man and woman on the island. 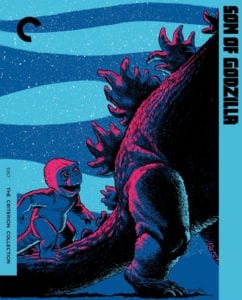 Maki Goro is flying in a small plane over the South Pacific when the plane detects a mysterious beam of energy. The crew of the plane determines that the energy came from a small, uninhabited island in the middle of ocean. The crew also spots Godzilla swimming in the ocean and heading towards the origin of the beam of energy. Detecting a potential story, Maki convinces the crew to alter course and head towards the island. Once there, Maki parachutes out of the plane and discovers a team of scientists working on the island. The scientists are working to perfect a weather-controlling system in secrecy. The scientist efforts are complicated by a group of 25 foot praying mantises, known as Kamacuras, who inhabit the island.

During the scientists’ first test of the weather-controlling device, their radioactive balloon is jammed by an unexplained signal coming from the center of the island. The balloon detonates prematurely as a result which creates a radioactive storm that washes over the island. The scientists and Maki protect themselves, but the radiation causes the Kamacuras to grow even larger, exceeding a hundred feet. Maki and the scientists investigate the Kamacuras sudden growth and find them attacking a giant egg that the three enormous bugs dig up from under the Earth. The Kamacuras attempt to crack the shell of the egg, and they are ultimately successful. Inside the egg is a baby Godzilla creature. The scientists find the baby Godzilla’s cries for help were the cause of the interference during their experiment.

The three Kamacuras begin to attack the helpless baby Godzilla, named Minilla. However, the full grown adult Godzilla arrives on the island and acts to save its offspring. Godzilla kills two of the Kamacuras with his atomic breath and chases off the third bug. Godzilla adopts the young baby, and the two lumbering lizards head off to the far side of the island. The scientists’ base is destroyed by the lumbering Godzilla during the giant lizard’s arrival and battle. The scientists and Maki are forced to live in nearby caves. The scientists discuss continuing their experiments while trying to reestablish contact with the mainland.

Meanwhile, Minilla grows quickly and becomes about half the size of the adult Godzilla in a few days. The elder Godzilla attempts to teach Minilla how to defend itself, including using his atomic ray. Minilla struggles to use his atomic ray, but Godzilla assists the young lizard by stepping on his tail which causes Minilla to produce an atomic ray. One day, Minilla comes to the rescue of Saeko Matsumiya, a young hermit girl who lives on the island. Saeko is attacked by the last Kamacuras, which Minilla scares off. However, Minilla accidentally awakens a giant spider named Kumonga that is hibernating underneath the Earth.

Kumonga begins to attack Saeko and Maki and they are forced to hide amongst the rocks. Eventually, they make their way back to the main cave entrance of the scientists’ cave. The Kumonga follows them and begins to web up the entrance of the cave. Saiko leads the scientists to a secret entrance in the cave that allows the scientists to escape the cave underwater. Meanwhile, Minilla stumbles upon Kumonga webbing up the cave. The Kumonga webs up Minilla and the now deceased Kamacuras. When the Kumonga begins to feed on the corpse of the Kamacuras, Godzilla arrives. Minilla and Godzilla join forces to combat the Kumonga by using their atomic rays. Ultimately, the two lizards kill the giant spider.

Seeking to escape the island, the scientists use their now perfected weather altering device on the island to escape Godzilla and his offspring. They turn the once tropical island into a land buried in snow and ice. The scientists are rescued by the timely arrival of an American submarine. Meanwhile, Godzilla and Minilla being to hibernate as they wait for the island to become tropical.