In Soul Man, after a white father cuts off his pampered teen from paying for his Harvard Law education, the boy poses as a young black man to receive a full scholarship. While he doesn’t expect anyone to notice, the boy quickly gets an education in good old racism. Once he falls for a black woman, he truly begins to realize the consequences of his selfish actions, and learns a great deal more than any school could ever teach him. 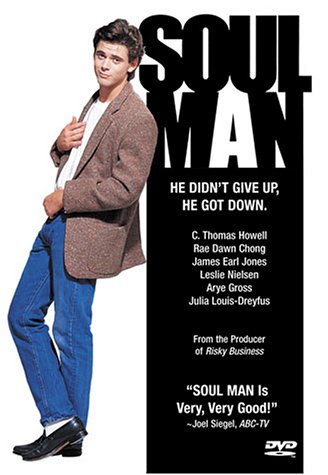 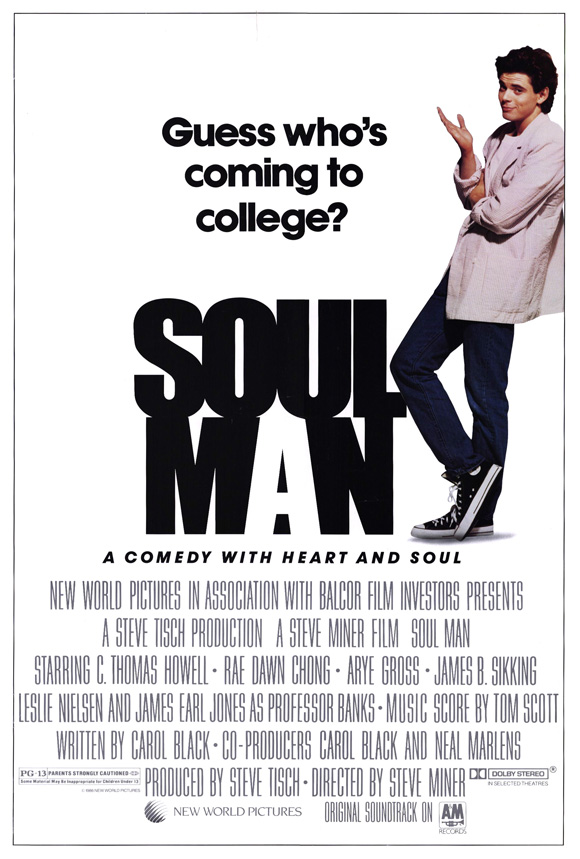 In Soul Man, Mark Watson (C. Thomas Howell) is a pampered son of a rich family. He’s about to begin studies at Harvard Law School along with his best friend Gordon (Arye Gross). However, when Mark’s father’s psychiatrist recommends he have more fun for himself instead of spending money on Mark; Mark finds he no longer has a way to pay for school. So, he decides to apply for a scholarship.

The only suitable one he finds is dedicated to African-Americans only. He decides to try to beat the system when he starts over-consuming tanning pills to look more like a black man. Next he alters his hair and voice before setting out for Harvard. Once there, he finds out P.D.Q. that prejudice and racism truly exists.

Soon he meets a young black student named Sarah Walker (Rae Dawn Chong), whom he first only flirts with, but gradually finds himself falling for. However, when she happens to mention that she lost out on the scholarship he received, he feels guilty of his deception. She now finds herself juggling classes with her job as a waitress; which she uses to support herself and her young son, George (Jonathan ‘Fudge’ Leonard).

Slowly, Mark begins to realize what it’s truly like to live as a black man. He winds up in jail when the police suspect him of stealing his own car; his landlord’s daughter and classmate, Whitney Dunbar (Melora Hardin) pursues him solely because he’s not white; and the film throws in other comical ‘80s stereotypes of black men to boot.

One chaotic day, Sarah, his parents (who aren’t aware he identifies as black for school purposes) and Whitney all make a surprise visit at the same time! With no way to deny it, he comes clean to reveal himself as white. For most people whom he’s met, it makes perfect sense. Sarah, however feels betrayed and is furious with him.

With the cat out of the bag, Mark meets privately with Professor Banks (James Earl Jones) in his office to tell him he plans to both apologize publicly and in writing to the university. He asks that he be allowed to continue to attend law school.

Professor Banks replies that Mark learned something that other white students never could; what it feels like to be black and be the subject of prejudice as a minority. However, Mark says he didn’t learn such a thing because he could have switched back to white any time, but the professor disagrees. Mark learned a great deal more than he thinks.

With Mark’s father now paying for school only until he gets a job (and to pay back the scholarship money he took), Mark gets a job as a bussing tables in the university’s cafeteria. There he overhears a couple of students tell a racial joke within earshot of Sarah. He punches the two which sends them flying. The movie ends with the two re-starting their friendship.