Ruben Stone is a heavy-metal drummer and one half of the metal duo Blackgammon. Ruben tours the country in his RV with his girlfriend Lou Berger, the lead singer of Blackgammon. One day, Ruben finds that his hearing is fading and goes to a doctor to learn what is wrong. The doctor tells Ruben that he is losing his hearing and that he will soon be deaf if he does not act to protect his hearing. Ruben’s hearing loss throws his and Lou’s life into turmoil, and if Ruben does not learn to live with silence, how can he ever find peace again? 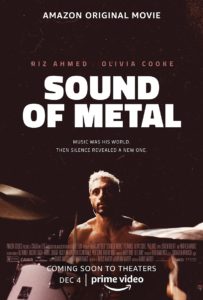 Ruben Stone (Riz Ahmed) is the drummer and one half of the metal duo Blackgammon. Blackgammon’s singer is Ruben’s girlfriend Lou Berger (Olivia Cooke). The couple travels around the country on tour in Ruben’s RV, which the couple lives and records in. One day, Ruben discovers that he is losing his hearing. He goes to a local pharmacy to seek a diagnosis, and they send him to a hearing specialist. The specialist performs a hearing test and finds that Ruben can only make out 20-30 percent of the words he hears. Even worse, the doctor informs Ruben that his hearing is deteriorating rapidly, and he will soon be completely deaf. The doctor discusses a cochlear implant with Ruben, but he states that they are expensive and not covered by insurance. The doctor informs Ruben that he needs to eliminate all exposure to loud noises, or he will continue to lose his hearing. Nevertheless, Ruben continues to perform.

Not long after, Lou learns about Ruben’s condition. She insists that Ruben stop performing for his safety, but Ruben insists on continuing their tour. Lou becomes concerned about Ruben’s sobriety since he is a recovering drug addict. She contacts Ruben’s sponsor and informs him of Ruben’s condition. The sponsor finds a shelter for recovering addicts who happen to be deaf. Ruben and Lou drive to the shelter and meet the manager Joe (Paul Raci). Joe tells Ruben that he is welcome to stay, but Lou cannot. Ruben decides to leave, but Lou makes the decision for him a short time later after Ruben has a melt down on the RV when he is overcome with frustration. Lou leaves to stay with her father in Belgium and Ruben returns to the shelter. Ruben turns over all his communication devices, although he remains obsessed about getting the implants.

Serenity is no longer wishing you had a different past. Joe

Once at the shelter, Ruben attempts to acclimate with the other members. He attends sobriety meetings but struggles to adjust to communicating without speaking. Joe sends him to a school for children who are deaf where he meets Diane (Lauren Ridloff). There, he begins to learn sign language. Ruben also begins to bond and connect with the children in the class, including teaching Diane and the kids how to play the drums. Joe also tasks Ruben with writing endlessly and encourages him to sit peacefully for long periods of time so that Ruben can become comfortable with silence. Ruben also starts to bond with the shelter members.

Ruben occasionally sneaks in and uses Joe’s computer to track Lou on social media. He still obsesses about the implants and desires to return to his previous life. He finds that Lou is experimenting with her music which causes Ruben to have a sense of urgency as to his recovery. After Ruben has been in the shelter for a few months, Joe offers to make him an employee of the community. Ruben seems shocked at the offer, and Joe tells him to think about it.

Ruben becomes desperate and has his friend Jenn (Chelsea Lee) sell his drums and other music equipment so that he can afford to get the implants. When that is not enough, Ruben sells the RV as well. Once he has the money, Ruben gets the cochlear implant surgery. While he is waiting to have the implants activated, he returns to Joe’s shelter. Ruben asks Joe to loan him money to buy back his RV. Joes refuses. Even worse, Joe asks Ruben to leave the shelter. Joe explains that the people at the shelter believe that deafness is not a handicap, something that Ruben has not accepted. Joe fears that Ruben’s presence with the implants may upset the delicate balance of the shelter. Ruben understands and leaves.

A few weeks later, Ruben has the implants activated. The implants work, but the sound that Ruben hears is distorted and not what he is used to you. Ruben finds the sound irritating and he is disappointed with the results. Nevertheless, he flies to Belgium to reunite with Lou. He proceeds to Lou’s father Richard’s (Mathieu Amalric) house. Richard welcomes Ruben and allows him to stay at the house. Richard confesses that he once did not approve of Lou’s relationship with Ruben. However, Richard explains that he has since learned that Ruben made Lou happy. When Lou arrives, she is glad to see Ruben, but extremely surprised.

At a gathering that night, Lou and her father perform a duet, though Ruben’s implants prevent him from fully enjoying the song. Later, Lou and Ruben discuss the possibility of playing music and touring again. Ruben notices that the conversation is making Lou anxious and suddenly realizes that he is not a positive influence on her. Ruben tells her that everything is okay and that she saved his life. Lou tells him that he saved hers too.

The next morning, Ruben wakes up early and packs his things. He leaves while Lou is still sleeping. He takes a walk and sits on a bench. He remains bothered by the distortion from the implants, so he removes them. Once removed, Ruben sits in silence, finding a sense of peace at last.