In 2022, New York City is an overpopulated mess of 40 million people. Rampant pollution and the destruction of Earth’s natural resources have left the people starving. To feed the planet, the Soylent Company has created a series of new food products: Soylent Red, Soylent Yellow, and Soylent Green. However, when an attorney named William R. Simonson turns up dead, Detective Robert Thorn must track down the killer. It leads him to uncover a sinister conspiracy and the horrible truth about Soylent Green. 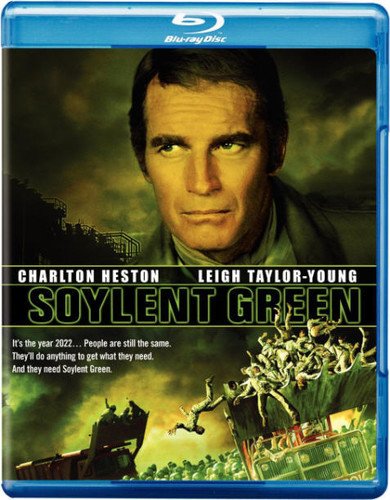 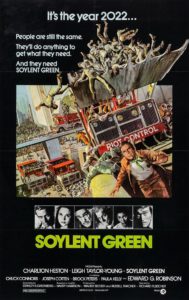 It’s the year 2022, and New York City’s population has hit 40 million people. This overpopulation along with pollution and catastrophic climate change has caused severe shortages of food, water and housing worldwide. Only the city’s elite can afford spacious apartments, clean water, and natural food.

Most housing for common people is dilapidated, cramped, and without electricity. Homeless live on the streets, on fire escapes, in stairwells, abandoned cars, subway platforms; basically anywhere. Additionally, the outside environment is oppressively hot and humid thanks to the out-of-control Greenhouse Effect.

The Soylent Corporation feeds a majority of the World’s population with some high-energy vegetable wafers called Soylent Red and Soylent Yellow. Their newest product is Soylent Green produced from high-energy plankton. While this new wafer is more tasty and nutritious, it’s like most other foods on the planet—in short supply. This leads to weekly riots over portions.

We meet Robert Thorn (Charlton Heston), a New York City Police Department detective from the 14th Precinct. He lives in one of the many dilapidated one-room apartments in town with his elderly friend Sol Roth (Edward G. Robinson). Sol is an ex college professor whose job now is to sort through the shattered remnants of written records and books to help Thorn’s investigations. The police department refers to people like him as Books. Sol reminisces to Thorn about the time before civilization as we knew it collapsed. However, Thorn’s world is far too distant from that time to fully comprehend any of Sol’s old tales.

When William R. Simonson (Joseph Cotten), a 68-year-old wealthy lawyer living in a luxury high-rise apartment building called Chelsea Towers West turns up dead, the police send Thorn to investigate it. Once at the crime scene, Thorn talks with the building’s superintendent Charles (Philip Stone). Charles takes Thorn to 22A on the 22nd floor where Simonson’s apartment is located.

Thorn finds Simonson face down in a pool of blood. Someone struck him multiple times in the back of the head with what Thorn thinks is a meat hook. Thorn seems less interested in investigating the death, and more with helping himself to the wealthy man’s belongings. Detectives don’t make much money, and the luxurious food, liquor and books he finds there are too tempting. He takes many items.

While he looks around, Simonson’s young concubine (which the rich refer to as furniture), Shirl (Leigh Taylor-Young) returns to the apartment with Simonson’s bodyguard, Tab Fielding (Chuck Connors). He claims that Simonson had him escort Shirl on a shopping trip to replenish supplies when the attack took place. A man named Wagner (John Dennis) then arrives with his sanitation crew to take Simonson’s dead body away as Thorn takes a statement from Fielding.

Back at his apartment, Thorn gives Sol the two books he took from Simonson’s apartment titled, Soylent Oceanographic Survey Report, 2015 to 2019. That evening, Thorn returns to his 14th Precinct to find hundreds of people lined up to collect death benefit money from recently deceased family members.

Thorn goes to Lieutenant Hatcher’s (Brock Peters) office to report his preliminary findings. He believes Simonson’s death wasn’t a robbery but an assassination since the attacker didn’t steal anything and the murder was a little too professional. Thorn also notes that the luxury apartment’s sophisticated security system was conveniently out of order on the night of the murder, and his bodyguard wasn’t there at the time. Thorn thinks that Fielding had something to do with the murder to boot.

The next day, Thorn heads over to Fielding’s apartment building. When he sees him leave, he goes to investigate his place. Fielding has his own furniture named Martha (Paula Kelly), and Thorn questions her about Fielding’s work for Simonson. However, the encounter only proves to be a little fruitful—in the form of a spoon (which he steals when Martha’s not looking) with some sort of jam on it.

Thorn returns home to eat a meal that Sol made with the food Thorn took from Simonson’s apartment. When they finish, Sol tells Thorn that Simonson was a member of the board of directors of the Soylent Corporation. Thorn gives Sol the spoon with jam on it, and he replies it’s $150 a jar strawberry jam; a luxury too expensive for a concubine of a simple bodyguard.

Thorn then heads back to Chelsea Towers West to question Shirl. She’s throwing a little party for the other furniture living in the tower. Thorn orders Shirl into the bedroom for a quickie. Shirl tells him that Simonson was very emotional in the days before his death, and even taking her to a local church.

As the two do the Soylent Sixty-Nine, Charles walks into the living room. He yells at the furniture before hitting a few for disobedience. Thorn leaves the bedroom half dressed to stop Charles from hurting anymore girls. He kicks Charles out and the furniture leaves.

With that itch scratched, Thorn heads over to the Church. He finds it overwhelmed with homeless people, but still manages to find the priest (Lincoln Kirkpatrick) to question him about Simonson’s confession. He’s of no help though. The priest is near catatonic from exhaustion and can’t really remember. Eventually comes around a bit and tells Thorn what Simonson told him was too horrible to describe.

By now, Thorn’s ruffled enough feathers that a man named Donovan (Roy Jenson) bribes Lieutenant Hatcher to close the case. When Thorn returns to the office, he quickly realizes someone’s gotten to Hatcher, but he refuses to sign the paper Hatcher’s demanding he sign to close the case. Hatcher then puts him on riot duty.

The next morning, Donovan goes to his boss, New York State’s Governor, Joseph Santini (Whit Bissell) to tell him that Thorn’s not only refused to end his investigation, but also spent twenty minutes talking to Simonson’s priest the day before. Santini was once Simonson’s partner in a high-profile law firm that had dealings with the Soylent Corporation. Santini orders Donovan to take care of the men. So he has Fielding go to the church and murder the priest, and a man named Gilbert (Stephen Young)—the man who killed Simonson earlier—take out Thorn.

Fielding shoots the priest in the head in his confession booth, as Gilbert finds Thorn on riot duty. Tuesday is Soylent Green Day, and the rations quickly run out; leading to the inevitable riot. The police call in the “scoopers” to clear the crowd, and chaos ensues. In the melee, Donovan fires several shots at Thorn, but hits innocent people instead. As the two men scuffle, Gilbert falls to the ground, but manages to shoot Thorn in his right calf. However, before Thorn can nab him for questioning, one of the trucks with a scoop on it crushes him to death.

Thorn immediately heads over to Fielding’s apartment where he beats him and his furniture for trying to kill him. Thorn then goes back to Simonson’s apartment where Shirl tends to him and his wound. Shirl also says that a prospective tenant will be arriving soon to rent the now free apartment, but she would like to instead go with Thorn because she likes him and doesn’t know if the new tenant will accept her.

Thorn rests for a bit, but when the curfew alarms begin to sound, he must leave. Soon the potential tenant (Carlos Romero) does arrive. He sets his expectations for what he wants from his furniture if he takes the place. He wants a fun girl for himself and his friends.

By now, Sol’s taken Soylent’s oceanographic reports to the Supreme Exchange—a library / gathering place for fellow Books. Sol and the other Books realize that the reports reveal the horrible truth about Soylent Green, but even after reading it for themselves, they find the truth impossible to believe. They need proof of this revelation.

Sol is unable to live with what he’s learned. He leaves Thorn a note that he’s going home and heads to a government clinic for mass euthanasia. Thorn finds the note and immediately hobbles to the clinic. He arrives as Sol drinks the Kool-Aid. The clinic bathes him in his favorite color of orange and plays light classical music while they project videos of Earth in it’s beautiful glory.

Thorn forces a staff attendant (Dick Van Patten) to let him talk to Sol one last time. Sol whispers his last words to Thorn which reveals the secret of Soylent Green. He then asks Thorn to follow his body to the processing center, and report back his proof to the Supreme Exchange.

Once Sol dies, Thorn sneaks down to the clinic’s basement where he witnesses the workers load the corpses onto waste disposal trucks. He secretly hitches a ride on top of one which soon arrives at a heavily-guarded waste disposal plant on the city’s outskirts. Once there, workers escort the black-clad sanitation drivers out of the truck at gunpoint before a white-clad plant worker takes over driving. That black-clad sanitation worker is then escorted to another truck leaving the facility to drive back to the clinic.

Thorn makes it inside the plant and witnesses the workers load the dead bodies onto a conveyor belt where they enter a large machine on one end and come out tasty Soylent Green wafers on the other end. As Thorn looks on in horror, two plant workers spot him and sound the alarm. Thorn is able to escape unscathed anyhow.

Thorn heads for the Supreme Exchange to report his findings, but Fielding is there with some other gunmen. Thorn finds a police phone box to call Hatcher for help, but he’s on the other line. Instead, Thorn has the operator call Shirl to tell her that to stay with the new tenant who’s going to rent Simonson’s vacant apartment. He then gets through to Hatcher, but has to leave when the assassins close in on him.

With the dusk to dawn curfew in place, the men chase Thorn through deserted streets. Thorn kills all the gunmen except for Fielding who shoots Thorn in the back. Thorn still makes it back to the church as Fielding follows. One last fight between the two erupts among the sleeping homeless people. Thorn is able to kill Fielding with an old kitchen knife he finds on the floor.

Hatcher and his men arrive to tend to Thorn who’s now near death and hysterical. Thorn reveals the horrific truth to the Lieutenant, surrounding officers, and remaining homeless folks; “Soylent Green is PEOPLE!”