The evil King Xayno of the Planet Argor is using his Gravity-Ray to crash the moon into Earth, and our planet’s only hope is a hero named Rocky Lazer. He’s the world’s greatest pilot, athlete, marksman, sword-fighter, wrestler, and crooner. The President of the United States of Earth sends Rocky and his crew on a dangerous mission into space to stop Xayno. 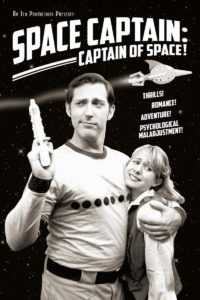 With the moon on a collision course with Earth, the World Space Council has determined that the evil King Xayno (Jeff Sproul) of the distant planet Argor is using a Gravity Ray to cause the catastrophe.

The Council sends their X-1 Rocketship to Argor to plead for the safety of the planet. Rocky Lazer (Matthew Wise) leads the team made up of a plucky first mate named Chip Skipper (Jeremy Mather), the brilliant Dr. Horst Karlock (Jared Warner), and Jean Jarvis (Alicia Barnatchez), the daughter of the President of the United States of Earth and the world’s first female professor…of something. She can’t remember what.

Learning of the X-1’s mission, King Xayno dispatches his fleet of Death-Saucers to kill the Earthlings. After a battle, the X-1 takes out many ships before crash landing on Argor.

Meanwhile at the Royal Palace of Argor, a centurion arrives to deliver the news to King Xayno, but Commander Nefarrus (Mike Wirsch) tries to get the info out of him first. The king arrives before that can happen, so the centurion tells him that although they suffered heavy losses, the X-1 crashed nearby.

The crew of the X-1 rests for a minute before heading off to find the palace. Along the path, a gigantic kitty cat attacks them. It kills Chip as he defends the crew. Two centurions arrive and shoot lasers at the kitty; scaring it off. After a quick chase, a fight ensues between the two groups which results in them getting the better of Lazer. They bind his hands behind his back with invosobonds, and take the prisoners to the palace.

At the palace, King Xayno orders Dr. Karlock to work for him and then has a centurion take him to the palace’s science lab. Xayno also falls head over heals in lust for Jean Jarvis, and even though there’s a spark between her and Lazer, he plans to make her his wife. He orders his men to throw Lazer into the Pit of Vast Torture and Suffering.

On the way to the pit, Chip shows up with Klarff (Matt Sears), Prince of the Squirrel Men, to save Lazer. Apparently, the Squirrel Men live on the moon’s surface, and Klarff is there to stop the catastrophe as well. He’s the one who saved Chip from the kitty cat. Before they can get on with the mission at hand, Lazer demands they rescue Jean and Karlock.

Klarff says they should seek out Lady Actulus (Erin Leigh Schmoyer) on the nearby Asteroid of the Ancient Sages to advise them. Back at the palace, King Xayno shows Jean around the science lab. There Dr. Karlock is hard at work building an Explosion Ray. When the king hears that Lazer’s escaped, he pressures Karlock to tell him what he knows, but he knows nothing of Lazer’s plan. The king’s daughter, the petty Princess Astra (Michele McNally), is now in the lab with them, and she’s quite interested in meeting Lazer.

Back on Earth at the World Space Council Headquarters, President Jarvis (Sean Williams﻿﻿﻿) meets with Dr. Middleton (Timothy Mather) and Dr. Crabbe (Nicolas Marti) to discuss contingency plans in the unlikely event that the crew of the X-1 is unsuccessful. However, all their plans revolve around destroying the Moon. Unimpressed, the President orders the men to continue trying to reestablish contact with the crew of the X-1.

By now, Klarff, Chip, and Lazer have landed on the asteroid, and head to Lady Actulus’ cave on it. Her guards kill Chip before she appears to them. She tells Lazer to track down Barron Ozzric (Jeremy Banks) on the planet Togg. He leads a band of rebels against King Xayno, but he’s also in love with Princess Astra even though she’s awful. Lady Actulus can not guarantee he will help Lazer because of it. She then advises Lazer on being a more caring person if he wants to win Jean’s heart. He and Klarff then immediately head back to the ship to find Ozzric. Surprisingly, once outside the cave, Chip catches up with them, alive and well.

Once the three men arrive arrive, Ozzric and his band of highwaymen besiege them above the clouds with rocket boots on their feet and swords in their hands. As Chip pilots the ship, Lazer and Klarff climb outside the ship’s hull with some rocket boots of their own to fight for their lives above the Splatterlands of Togg. The highwaymen kill Chip and capture Lazer and Klarff. They then take the prisoners to Ozzric’s hideout where he accuses them of being spies for Xayno.

While they try to get Ozzric to form an alliance with them, Princess Astra arrives. She’s pleased to meet Lazer, and convinces Ozzric to let her take Lazer back to her father. They leave Klarff on the planet alone; tied to a tree.

We return to the Asteroid of the Ancient Sages where Lady Actulus now advises King Xayno on Rocky Lazer’s whereabouts. Since she wants to remain neutral, she only tells him to watch his daughter. She then advises Xayno on winning Jean’s heart.

Now on Princess Astra’s ship, the captive Rocky Lazer suddenly remembers he’s still wearing his rocket boots and escapes through the ship’s ceiling. King Xayno then calls his daughter as he’s found out from Ozzric that she has Lazer. She tells him the bad news, and he gets cross with her. She hangs up on him.

Back at the science lab, Jean finds Dr. Karlock to tell him her escape plan, but he’s not interested. He has the schematics and location for the Gravity Ray which is causing the moon to crash into the Earth. When a centurion shows up, he takes the schematics and the two to King Xayno.

We are now back again at the Asteroid of the Ancient Sages. Rocky Lazer needs more advice. He tells her he’s off his game and it’s all Lady Actulus’ fault. She advises him to listen to others and respect their opinions.

Back at the World Space Council Headquarters, Dr. Middleton and Dr. Crabbe are still unsuccessful at making contact with the crew of the X-1. President Jarvis returns, and asks the men to blow up the moon, much to their delight.

We then return to Argor where Jean and Dr. Karlock are bound to a wall in a dungeon. Lazer arrives to rescue them, but a centurion arrives with an invisowhip to kill Lazer. During the fight, Chip shows up alive. He takes out the centurion and frees Jean and Karlock for Lazer. Another centurion shows up and kills Chip. He takes the three prisoners and forces them to see King Xayno yet again.

There Lazer reunites with Klaff who’s also Xayno’s prisoner. Commander Nefarrus wants to shoot Lazer, but before he can, Ozzric shows up to save the day! He takes Princess Astra hostage and holds his sword to her throat. She tells Nefarrus to take careful aim and shoot Ozzric. Xayno pushes Nefarrus to shoot his daughter as well as Ozzric. Lazer breaks free and knocks out Nefarrus and the two centurions in the room as Xayno escapes. Suddenly Chip appears alive and well out of nowhere, much to Lazer’s annoyance. They all head out, but as they do, Nefarrus comes to long enough to kill Chip…again. They all head back to the Planet Togg to regroup and plan their final strike against King Xayno.

By now Ozzric’s starting to have serious concerns about Princess Astra’s interest in a relationship with him, and he vents to one of his highwaymen about it. Dr. Karlock gives Lazer a replica schematic of the Gravity Ray he drew that’s 85-90% accurate, at worst B- work. What’s most important is that he’s pretty confident it does have the on/off switch that he drew on it. Chip appears to them again…alive and well…for now.

They decide to have Ozzric and his highwaymen put on their rocket boots and attack the Royal Palace of Argor while Klaff and Dr. Karlock head out in the X-1 to take on Xayno’s fleet and contact Earth. While this goes on, Lazer, Chip, and Jean will sneak to the mountain with the Gravity Ray to turn it off. Before they leave, Ozzric has one of his highwaymen tie Princess Astra to a tree where Ozzric tells her how awful she is. They leave her there alone and head out to glory!

As the distractions begin and Lazer’s team arrives at the mountain, we return to the World Space Council Headquarters. The President is about to give the order to blow up the moon as the two scientists gleefully look on. However, Dr. Karlock makes contact with them on the radio and tells them to give them more time so that Rocky Lazer can shut off the Gravity Ray. The President agrees to give them the time they need.

On the mountain, King Xayno and Commander Nefarrus arrive to stop Lazer and Jean sans Chip, who’s dead again. The centurions ask Nefarrus for help as the X-1 is destroying all their ships in space. Before heading out, he gives Xayno his gun and tells him to kill Lazer and Jean. However, Jean and Lazer try to talk Xayno out of it. It almost works, but Xayno snaps out of it. He shoots them with the ray gun. The two fight its effects which doesn’t immediately kill them. They knock the gun out of his hand, and begin to slap him around a bit before he pulls a sword and charges him. They move out of the way in the nick of time and he falls into the Pit of Eternal Hellfire.

They switch off the Gravity Ray, but the moon’s inertia and Earth’s gravitational pull won’t stop the moon from slamming into the planet. With no reverse button, all seems doomed. Ozzric shows up to tell them the fight is over and they won, but Lazer says they failed. They head back to the X-1, and will figure out what to do on the way.

Everyone boards the X-1 and hightails it back to Earth. Commander Nefarrus shows up in his Death-Saucer to kill them all, but Chip reappears alive again in deep space wearing rocket boots but no space suit. He gets in between the two ships as Nefarrus activates his laser. It cuts Chip in two. Part of his body slams into the ship’s laser, distracting the Commander long enough for Lazer to blow up the Death-Saucer with the X-1’s laser.

Back on Earth, the moon is about to slam into the planet when it suddenly starts to retreat from the Earth’s surface. We see the X-1 has somehow tied a big chain around the Moon and dragged it back into space. Safety and smiles all around!

President Jarvis gives the crew of the X-1 his thanks. President Jarvis promotes Lazer to Captain of Space! He, Jean, Klaff, and Dr. Karlock decide to form a new team for more space adventures. Ozzric says he will go back to his people who need him. The group drinks a toast using Dr. Karlocks expensive space champagne. Chip reappears alive and well again outside the ship’s window as Lazer closes the blinds on him.