When four astronauts working on a Sanitation Station in Earth’s orbit bring a mysterious device aboard their ship, all life on the planet below inexplicably disappears. Soon, discovering what happened to civilization is the least of their worries as a mutating rubber duck named Gary appears. The four are the only thing that stands between Gary and him opening a portal to his evil dimension which will allow him to take control of our Universe. 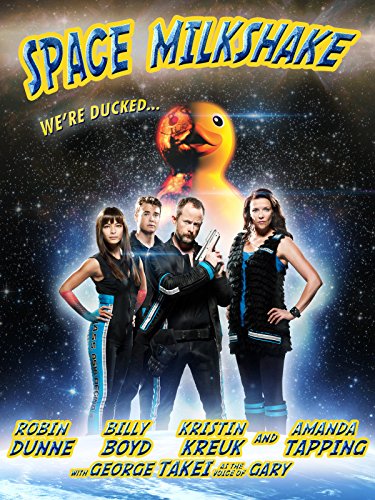 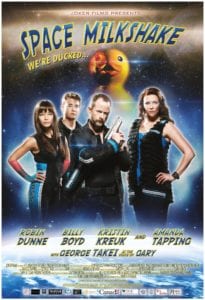 Four astronauts; Anton, Valentina, Tilda, and Jimmy work aboard the Sanitation Station Regina whose mission is to destroy any space debris in its sector. When Earth orders them to destroy a shuttle in their vicinity, they note how eager the Earth is to see it destroyed. The crew thinks there is something valuable to salvage from the shuttle, so Anton and Valentina head off to inspect it instead of destroy it.

As they arrive, there is a brilliant flash. The Earth suddenly goes silent, and all the space debris disappears. Anton and Valentina take a mysterious object from the shuttle, and return back to the Regina.

With everyone back on board, an alien robot suddenly appears, takes Tilda’s form, and kills her. Anton and Valentina try to contact Earth, but WENDI, the ship’s computer, interrupts them for a scheduled Scrabble break.

During their game, something in space strikes the Regina. It turns out to be a yellow rubber duckie, but this is no ordinary rubber duckie. It is, in fact, Gary, an evil alien, with plans to take over the Universe.

Jimmy fixes WENDI which has been on the blink, and WENDI confirms that there isn’t any communication from Earth. Unable to talk, Robot Tilda warns Jimmy about Gary using Scrabble pieces, but Anton interrupts them before anything is learned.

Meanwhile, Valentina tries again to break up with Anton, and get a transfer off the Regina. She still has feelings for her ex-boyfriend, Gary, who we learn gave her a rubber duckie identical to the one that hit the shuttle a few minutes prior. Gary is an old professor of hers whom she dated for about three years in college. Gary thought that it was possible to travel in between dimensions, and it looks like he succeeded.

Jimmy discovers the mysterious object that the team picked up on the strange shuttle sitting in a pile of rubble in the salvage bay. He takes it to the break room where Robot Tilda calls it The Time Cube. (Robot Tilda apparently taught herself English via the ship’s mainframe.) That The Time Cube is the most dangerous machine in the universe. Jimmy says it looks pretty.

Robot Tilda confesses to Jimmy that she isn’t human, but Jimmy still begins to fall in love with her anyway. Gary sabotages WENDI’s systems as Jimmy tells Anton and Valentina that Tilda is a robot. Tilda says she comes from a parallel universe, and that someone has been traveling across alternate dimensions (Gary), and is causing destruction on a galactic scale. The Nexus point of all damaged realities is the Sanitation Station Regina. Tilda is there to make sure nobody ever activates The Time Cube.

An alarm sounds because of a new power fluctuation on the Regina, and Valentina goes to the control room to fix it. It is a false alarm, but rubber duckie Gary reveals himself to her. He says he needs her help to get back to his dimension, and The Time Cube is the only way to get back.

Gary deactivates the ship’s control interface, and then attacks Anton in the control room. He then runs off, and Anton pursues him with Valentina in tow. Gary begins to grow and get stronger before Anton can find him.

Tilda discovers that the Sanitation Station Regina is falling out of orbit, and will hit the Earth’s atmosphere in about 28 minutes.

Gary and Anton battle it out again, and he nearly kills Anton. Gary tries one more time to get Valentina on his side, and promises her the universe. The two have some sort of space sex off screen.

Tilda attends to Anton’s injuries while Jimmy tries to fix the Regina’s navigation. He manages to trap Gary in the storage bay, but Valentina hits Jimmy from behind with an object. The blow knocks him to the ground. She lets Gary out, and gets ready to leave with him, but Tilda hits her from behind with a drill, and knocks her to the ground. They then tie Valentina to a chair with 15 minutes to spare, and try to fix the Regina’s plunge into Earth.

Tilda interfaces with WENDI to repair the controls, but as she and Jimmy work, Valentina escapes with The Time Cube. Jimmy heads outside the ship to activate the thrusters which will fix its declining orbit.

Valentina talks to Anton one last time before giving Gary the Time Cube. Gary shows up, and tells Valentina to kill Anton, who is still fairly helpless from his injuries from Gary. Valentina refuses to do it because Gary keeps telling her what to do. She gives Anton The Time Cube, and Gary knocks her to the ground. Tilda shows up and tosses a laser gun to Valentina. She shoots and kills Gary with a slimy, Ghostbusters type explosion.

Jimmy manages to activate the Regina’s thrusters; saving everyone. Tilda configures The Time Cube to the Regina so they can return to their own dimension. They activate the cube, and everything seems back to normal. It appears they have returned just a few minutes earlier as they arrive in time to see Gary’s shuttle approach them at the same time it did at the beginning of the movie. They bring out the class ten level guns, and atomize the ship; killing Gary once and for all. Kisses and smiles for everyone.