Two years after the events in the first Spider-Man film, Peter Parker still finds himself struggling to balance his life as a simple college student and that of the amazing Spider-Man. Peter finds himself at odds with his best friend Harry, struggling to help his Aunt May, and swimming in his own personal financial crisis. All while he still longs for the girl of his dreams, Mary Jane Watson. But when a new villain in the form of Dr. Otto Octavius arrives on the scene and threatens the lives of everyone in New York, Peter once again remembers that it is his great responsibility to stand up to danger with his great power. 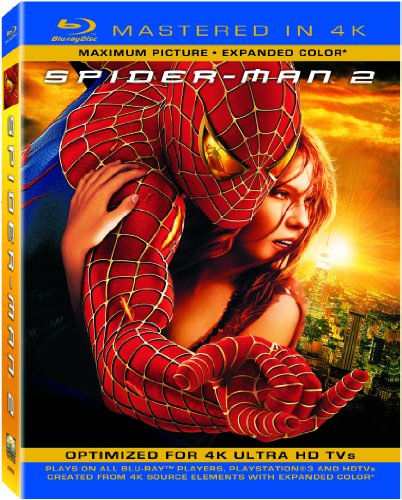 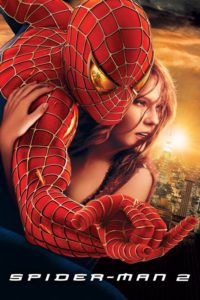 Two years after the events in the first Spider-Man film, Peter Parker (Tobey Maguire) still finds himself struggling to balance his life as a simple college student and that of the amazing Spider-Man. Peter struggles to make enough money as a freelance photographer at the Daily Bugle and is in academic trouble in his college courses due to fighting crime as the wall-crawler. Worse, Peter finds himself estranged from his best friend Harry Osborn (James Franco) who still blames Spider-Man for the death of his father, Norman Osborn (Willem Dafoe), a man that Peter knows as the Green Goblin. But what ultimately breaks Peter’s heart is the distance he must put between himself and the love of his life, Mary Jane Watson (Kirsten Dunst).

One day, Harry, as head of Oscorp’s genetic and scientific research division, is sponsoring a fusion power project by nuclear scientist Dr. Otto Octavius (Alfred Molina). Octavius is a friend of Peter’s physics professors, Dr. Curt Connors (Dylan Baker), so Octavius befriends and mentors Peter. Octavius believes Peter to be gifted but lazy. Octavius wears a specially designed harness that taps into his brain and allows him to control four robotic arms, each with their own artificial intelligence. During a public demonstration of the Octavius’ project, a power spike causes the fusion reactor to destabilize. Octavius refuses to shut down the machine and the instability goes critical and kills Octavius’ wife Rosalie (Donna Murphy). Peter changes into Spider-Man and shuts down the experiment, destroying Octavius’ experimental machine. In the aftermath, it is discovered that Octavius’ harness is fused to his spine and the inhibitor chip that prevented the arms from influencing the scientist’s mind has been destroyed. Not long after, a team of doctors attempt to remove the arms from Octavius by cutting them off, but the arms act in self defense and kill all the doctors. Octavius awakens to see the murders that his arms have committed and goes into hiding in an abandoned warehouse near the harbor. The arms convince Octavius to continue his research and to blame Spider-Man for complications in the previous experiment that killed his wife.

At the same time, things continue to go bad for Peter. He discovers that his beloved Aunt May (Rosemary Harris) is facing eviction, and that he does not have the financial assets to help her. Due to the stress, Peter begins to suffer from temporary but recurring losses of his powers, sometimes in life-threatening situations. One afternoon, Peter goes with his aunt to a bank to try to get a new loan to save May’s house. A snotty loan officer (Joel McHale) rejects her request for the loan. At the same time, Octavius arrives at the bank and robs it to acquire funding for his continued experiments. Peter changes into Spider-Man to stop him, but his powers work inconsistently. Even worse, Octavius takes May as a hostage. Peter saves her, but Octavius gets away with the money.

Meanwhile, Mary Jane finds success in a show on Broadway. Although she still has feelings for Peter, she has moved on in a relationship with astronaut John Jameson (Daniel Gillies), the son of Peter’s boss J. Jonah Jameson (J.K. Simmons). John and Mary Jane announce their engagement at a public gathering, which devastates Peter. Shortly afterwards, Peter finds that his powers have completely quit on him due to his continuing emotional turmoil from attempting to balance his life as Peter and Spider-Man. Peter decides to quit being Spider-Man and dumps his costume in the trash. A garbageman (Brent Briscoe) brings the costume to Jonah, who frames it on the wall of his office.

Peter returns to a normal life. His grades and attendance in his college classes begin to go up. He tries to reconcile with Mary Jane, but she rejects his advances and tells him that she wants someone who can be there for her. Peter helps May pack the house for the bank sale and confesses his responsibility in Uncle Ben’s (Cliff Robertson) death. May is initially devastated but ultimately forgives Peter. All the while, Peter grows concerned about the increase in crime in New York City which he still feels is his responsibility to stop.

Meanwhile, Octavius rebuilds his machine but still needs the isotope tritium to fuel his reactor. He goes to Harry and demands it from his former partner. Harry agrees to give him the isotope if Octavius brings Spider-Man to him. Harry tells Octavius that Peter knows how to get in touch with Spider-Man. Octavius locates Peter at a café with Mary Jane, who is trying to figure out Peter’s true feelings towards her. Peter’s powers return and warn him of the danger, but Octavius still gets the better of Peter. Octavius tells Peter to tell Spider-Man to come to him or he will kill Mary Jane. Octavius then leaves with his hostage, and Peter notices that his powers have returned in full. He goes to the Daily Bugle building and steals back his costume and then goes after Octavius.

Spider-Man and Octavius battle across the skylines and along the top of a subway train. Octavius sabotages the controls of the train and leaves Spider-Man to save all the passengers. Spider-Man saves everyone and exhausts himself. He also loses his mask temporarily. The passengers are grateful for Peter’s actions and promise not to reveal his identity. Octavius returns and quickly subdues an exhausted and completely costumed Spider-Man. Octavius delivers a tied-up Spider-Man to Harry and collects his tritium. Harry prepares to kill the bane of his existence and removes Spider-Man’s mask. Harry is shocked to learn that his best friend Peter is his worst enemy. Peter breaks free of his binds and tells Harry that there is more at stake than Harry’s grudge against Spider-Man. Harry directs Peter to Octavius’ lair near the harbor.

Peter’s finds the lair, but Octavius is alerted to his presence by his arms. The two battle each other just as the reactor begins to threaten the city. Mary Jane hangs helpless from her metal binds nearby. The reaction grows out of control, and although Peter subdues Octavius, he cannot stop the reactor this time. Peter reveals his identity to Octavius and pleads with the scientist to help him stop the reaction. Octavius regains his own will over his arms and his humanity and sacrifices himself to destroy the reactor by sinking it into the river. Mary Jane sees that Peter is Spider-Man and suddenly understands Peter’s duality. Peter confesses his love for her but explains that due to the dangers of him being Spider-Man that they can never be together. Peter returns Mary Jane to John and leaves.

Meanwhile, Harry is visited by a vision of his father Norman who pleads for Harry to avenge his death. Angry, Harry shatters a mirror that hides a secret Goblin storeroom that his father left in the brownstone with an arsenal of Goblin weapons and formula. Soon after, Mary Jane abandons John at the alter and runs to Peter’s apartment. Mary Jane confesses her love and tells Peter that she is willing to accept the risks of being in a relationship with him. The couple share a kiss that is interrupted by police sirens. Mary Jane encourages Peter to go help as Spider-Man, but she looks troubled as he swings away into potential danger.