In the third and final film of the Sam Raimi Spider-Man saga, things are going good for Peter Parker. His relationship with his girlfriend, Mary Jane, is progressing and the world has become more accepting of Spider-Man. However, when Peter’s best friend, Harry Osborn, becomes the new Green Goblin and the man responsible for the death of Peter’s Uncle Ben, Flint Marko, escapes from prison, Peter finds his life turned upside down. Things are made worse when an alien symbiote attaches itself to Peter and gives him heightened powers and aggression. Can Peter find his way back to what it means to be Spider-Man before it’s too late? 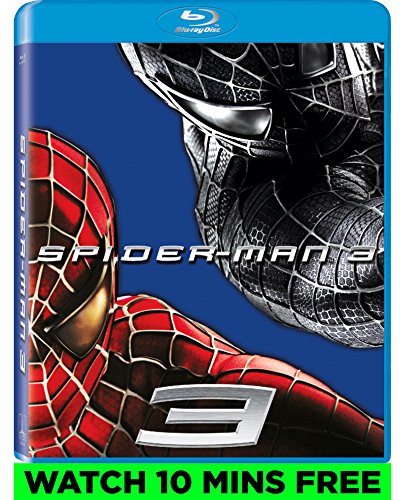 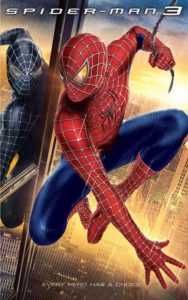 For nearly the first time in his life, things are going well with Peter Parker (Tobey Maguire). His relationship is going strong with his girlfriend Mary Jane Watson (Kirsten Dunst) and the general public not only likes, but generally appreciates Spider-Man despite Daily Bugle editor J. Jonah Jameson’s (J.K. Simmons) constant negative publicity campaign against him. As the film opens, Peter and Mary Jane sit on a web and stargaze in Central Park. Nearby, a meteorite lands and an extraterrestrial symbiote crawls away towards Peter’s motorbike. The symbiote follows Peter home to his apartment.

One day, Peter visits his Aunt May (Rosemary Harris) to discuss his plans to propose to Mary Jane. Aunt May gives Peter her engagement ring to give to Mary Jane. As Peter is returning home, he is attacked by Harry Osborn (James Franco) who seeks revenge against Spider-Man for his involvement in his father’s, Norman Osborn (Willem Dafoe), death. Harry has used his father’s performance enhancing gas and Green Goblin technology to make himself the new Goblin. Peter defeats Harry, but the younger Osborn develops amnesia after hitting his head during the battle.
Meanwhile, police pursue escaped convict Flint Marko (Thomas Haden Church) as he stumbles into a scientific experiment. Marko falls into an experimental particle accelerator that fuses his body with the surrounding sand. As a result, Marko develops the ability to control sand and reform his body with it. Marko decides to use his new ability to raise more money to help his sick daughter (Perla Haney-Jardine).

A few days later, a festival is held to honor Spider-Man as one of the city’s heroes. Spider-Man is presented with an award by Gwen Stacy (Bryce Dallas Howard), a woman that Spider-Man saved just a few days before. Gwen kisses Spider-Man in a similar way that Mary Jane kissed Spider-Man in the first film. The kiss angers Mary Jane who is nearby with Harry watching on. Immediately afterwards, Marko robs an armored truck nearby. Spider-Man intervenes, but he is easily defeated by Marko. A short time later, Peter and Aunt May are summoned to the police station to meet with NYPD Captain George Stacy (James Cromwell), Gwen’s father. Captain Stacy informs them that Marko is the man responsible for the death of Peter’s Uncle Ben (Cliff Robertson), not the deceased Dennis Carradine (Michael Papajohn).

Peter is disturbed by the information. As he tries to sleep in his costume, the symbiote crawls out and attaches itself to Peter and becomes part of the costume. Peter awakens in the new black suit atop of a building. Peter finds that the suit further enhances his already powerful abilities. Peter is not cognizant of the symbiote’s ability to bring out the darker side of Peter’s personality. Spider-Man goes on the hunt for Marko in his new costume. He tracks him down in a subway tunnel. The two superpowered beings battle each other. Spider-Man discovers Marko’s weakness and uses water to reduce Marko to mud before washing him away.

Meanwhile, Mary Jane’s career is struggling. After making her Broadway singing debut, she is let go from her show after receiving negative reviews from critics. When Peter attempts to propose to her, they get into an argument before Peter can pop the question. Mary Jane continually finds Peter’s altered personality off putting and herself distanced from him. She spends one afternoon with Harry and the couple share an intimate moment that Mary Jane immediately regrets. Afterwards, Harry has another hallucination of his father which causes Harry to regain all his memories, including those about Spider-Man. Harry forces Mary Jane to break up with Peter under the guise that she is in love with someone else. Harry then tells Peter that he is the other man. Peter comes to confront Harry at his father’s home. Harry informs Peter of his returned memories and the two men fight for a second time. This time, Peter nearly kills Harry with a goblin bomb that severely scars Harry’s face.

At the Daily Bugle, Peter faces competition for his Spider-Man photographs from new photographer Eddie Brock (Topher Grace). Eddie sells a picture to Jameson that implicates Spider-Man in a crime. Peter recognizes that the photograph is a forgery based on some of Peter’s prior work and publicly exposes Eddie. As a result, Eddie is fired and humiliated, and the Bugle is forced to write a retraction. Later that night, Peter takes Gwen to a jazz club where Mary Jane works as a waitress and singer. Peter dances with Gwen to make Mary Jane jealous, but Gwen realizes what Peter is doing and leaves. Peter gets into a confrontation with Mary Jane and the club’s bouncers and accidentally hits Mary Jane. Peter comes to the realization that the suit is corrupting him and tries to remove it in a church bell tower. Downstairs in the church, Eddie hears the ruckus as Peter struggles to remove the symbiote. The sound of the bells drives the symbiote from Peter and it lands on Eddie, who becomes Venom.

As Venom, Eddie locates Marko and convinces the convict to join forces to kill Spider-Man. Eddie kidnaps Mary Janes and holds her captive in a taxicab held in a web high above a construction site. Marko uses his powers to turn into a giant sandman to keep the police from rescuing Mary Jane. Peter goes to Harry and begs for his help to stop both Venom and Marko. Harry refuses, but after Harry’s butler (John Paxton) informs Harry that Spider-Man did not kill Norman, Harry changes his mind. Meanwhile, Peter takes on Marko and Venom alone and is being soundly beaten until Harry shows up on his glider. A large-scale fight ensues with Spider-Man taking on Venom and Goblin taking on Marko.

Venom attempts to impale Spider-Man with Harry’s glider, but Harry jumps in front of Peter and takes the fatal blow himself. Peter assembles a perimeter of metal pipes to create a sonic attack against Venom. Peter successfully separates Eddie from the symbiote, but when Peter activates a goblin bomb to destroy the symbiote, Eddie jumps into the explosion and is killed.

After the battle, Marko explains that Ben’s death was an accident that has haunted him ever since it happened. Marko tells Peter that everything that he has done was only to help his daughter. Peter forgives Marko and allows him to escape. Peter and Harry reconcile just before he dies in Mary Jane’s arms. After Harry’s funeral, Peter visits Mary Jane at the jazz club. The couple, both haunted by their mutual loss, reconcile and share a dance, uncertain as to what their future together will hold.