Following the events of Avengers: Endgame, Peter Parker returns in Spider-Man: Far From Home. Our friendly neighborhood Super Hero decides to join his best friends Ned, MJ, and the rest of the gang on a European vacation. However, Peter’s plan to leave super heroics behind for a few weeks is quickly scrapped when he begrudgingly agrees to help Nick Fury uncover the mystery of several elemental creature attacks. Spider-Man and Mysterio join forces to fight the havoc unleashed across the continent but all is not as it seems. 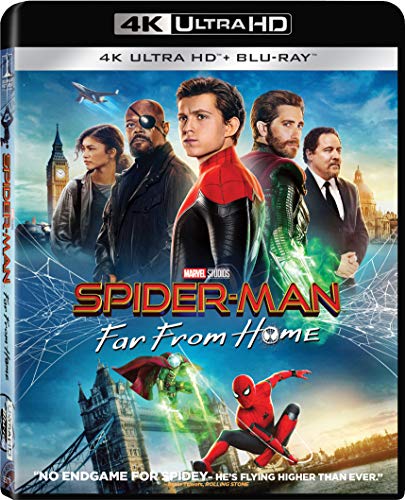 Spider-Man: Far from Home begins in Ixtenco, Mexico with Nick Fury and Maria Hill investigating an unnatural storm. When they encounter the Earth Elemental there, Quentin Beck, a super-powered man, shows up to fight it.

Back in New York City, the Midtown School of Science and Technology begins its academic year for the students who were brought back to life from that little blip in the road eight months prior. Peter Parker finds out that the school is organizing a two-week summer field trip to Europe. Even though he’s still depressed over Tony Stark’s death, he decides to go on the trip where he plans to confess his little crush on fellow classmate, MJ.

During a fundraiser for the homeless his Aunt May is throwing, Happy Hogan lets Parker know that Fury will soon be reaching out to him. Parker doesn’t take the call from Fury. Instead he leaves the event after questions about his deceased mentor and idol overwhelm him.

Parker and and pals arrive in Venice, Italy, and we see that fellow classmate, Brad has a thing for MJ too, and he’s doing pretty well with her, or is he? Suddenly, the Water Elemental begins wreaking havoc on Venice, and Beck again arrives to save the day. Our boy Beck claims to not be from around here. He hails from a different reality; one amongst many in the Multiverse, and the Elementals have killed his family. So, he’s got a thing against these monsters.

Fury finally meets with Parker, and gives him Stark’s glasses that are meant for his successor. The glasses comes nicely equipped with the artificial intelligence E.D.I.T.H. that has access to all databases of Stark Industries. However, Parker doesn’t take Fury’s offer, and instead rejoins his class.

Fury doesn’t give up so easily, and he redirects the school’s trip to Prague on the down low because the Fire Elemental will most likely strike there next. In Prague, guess what happens? The Fire Elemental appears, and Beck’s there to take it on. However, this time, it takes Parker’s help to destroy it.

Fury and Hill then show up to invite both Parker and Beck to Berlin about a new superhero team. Parker likes Beck, and he considers him Stark’s worthy successor. So, he gives him the E.D.I.T.H. glasses. What Parker doesn’t know is that Beck is really a former holographic-illusions specialist at Stark Industries that got his ass fired for his unstable lifestyle.

Beck now heads a super team of his own comprised of ex-Stark employees which used their skills to create some advanced projector drones. They are the group behind the simulations of the Elementals, and their attacks allow Beck to masquerade as a hero. So, giving this guy the glasses is kind of a bad idea, Parker.

By now, MJ has deduced that little Peter Parker is Spider-Man, so how is Brad going to compete with that? The two of them examine a projector with a simulation of the Air Elemental on it that MJ found in the recent rubble. They quickly deduce that Beck is a fraud.

Parker now travels to Berlin to meet with Fury, but he too is an illusion. He battles many illusions before the real Fury can subdue Beck. Fury then forces Parker to tell him the names of anyone else who knows of Beck’s evil deception, but then that Fury too is revealed to be just an illusion…stupid projectors! A train rolls in, and hits Parker; knocking him unconscious into one of the train cars.

He wakes in jail in the Netherlands, but he quickly breaks out to contact Hogan. He flies Parker to London, and shows him one of Stark’s suit-manufacturing machines he left behind. Parker uses it to synthesize a new super suit for himself.

Back in London, Beck uses E.D.I.T.H. to orchestrate his biggest illusion yet. (Shouldn’t have given him those glasses, Parker!) His masterpiece is an Earth, Wind & Fire disco funk of all four Elementals which he intends to use as a cover to kill MJ and any other friend whom she might have revealed his dirty little secret to.

When Parker arrives to disrupt it, Beck has the drones to attack him. Parker defeats Beck, regains the glasses; the control of E.D.I.T.H., and calls off the Droid attack on the Wookies. Beck dies from the wounds he sustained when the drone’s guns misfired. However, one of Beck’s assistants escapes with data of the events. Parker quietly returns to New York City, and begins a relationship with that little hottie, MJ. That fucker Brad never stood a chance.

In a mid-credits scene, Parker and MJ wind down their date as Pat Kiernan presents a BREAKING NEWS BULLETIN. Much to Parker’s horror, The Daily Bugle editor J. Jonah Jameson releases leaked footage of the late Quentin Beck in which Beck says that Spider-Man murdered him and ordered the deaths of many others. He then reveals that Peter Parker is your neighborhood Spider-Man.

In a post-credits scene, we learn that Nick Fury and Maria Hill are the shapeshifting alien Skrulls, Talos and Soren, in disguise. Talos contacts the real Fury, who is out commanding a ship of Skrulls, and tells him of the unexpected troubles they had in stopping the Elementals.