A young Peter Parker/Spider-Man begins to navigate his newfound identity as the web-slinging super hero. Thrilled by his experience with the Avengers, Peter returns home, where he lives with his Aunt May, under the watchful eye of his new mentor Tony Stark. Peter tries to fall back into his normal daily routine – distracted by thoughts of proving himself to be more than just your friendly neighborhood Spider-Man – but when the Vulture emerges as a new villain, everything that Peter holds most important will be threatened. 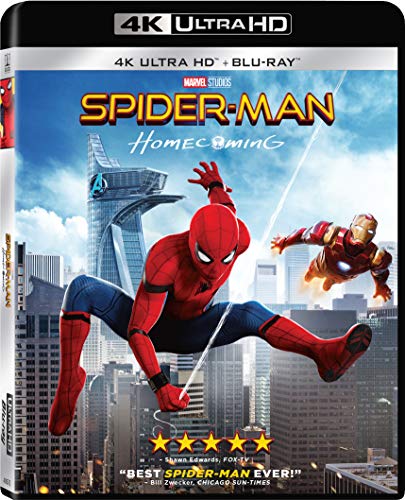 Spider-Man: Homecoming begins after the Battle of New York. We find Adrian Toomes and his salvage company under contract to clean up the city, but soon the Department of Damage Control (D.O.D.C.), a partnership between Tony Stark and the U.S. government takes over the project. This pisses off Toomes, and he has his employees keep any Chitauri technology they have already recovered so they can use it to create new and more advanced weapons which the firm can sell.

Eight years pass, and although Stark has already recruited Peter Parker into the Avengers team, Parker’s back to his studies at the Midtown School of Science and Technology. He returned because Stark thinks he’s not yet ready to become a full Avenger. That will probably change if Marvel ever gets the Spider-Man movie license back from Sony Pictures, but I digress.

However, Parker soon quits his school’s academic decathlon team because he’d like to spend more time focusing on his secret identity as Spider-Man. One night, while out doing whatever a spider can, Parker stops some shady men from robbing an ATM using Toomes’ super advanced weapons. When he returns home to his Queens apartment, his BFF, Ned, discovers Parker’s secret identity.

Parker must save Davis, but Toomes captures him, and tosses his scrawny butt into a lake. He nearly drowns when he becomes entwined in a parachute that is built into his suit, but Stark swoops in to rescue him after the monitor the Spider-Man suit he gave Parker alerts him to the situation. Stark then gives Parker a stern warning about messing with any more Vultures.

Elsewhere in the town, Toomes accidentally kills his man, Brice with one of the super advanced weapons. Then Schultz transforms himself into the totally brand new Shocker; giving him what the cool criminals consider a significant advantage over the local police.

Parker and Ned find Brice’s weapon he left behind, and remove its power core to examine it. Soon, the tracking device Parker hid on Schultz goes off; leading him to Maryland. So, Parker rejoins his old decathlon team, and heads with them to Washington, D.C. to compete in the national tournament there.

By now, Ned and Parker manage to disable the tracker in the Spider-Man suit, and unlock its advanced features. When Parker finds Toomes, and tries to stop him from stealing some weapons from a D.O.D.C. truck, he gets trapped inside it, and misses the whole tournament.

Parker discovers that the power core is actually an unstable Chitauri grenade when he races to the Washington Monument, and it explodes. However, the ruckus traps Ned and some other friends in an elevator. Parker must now evade the local authorities to save his pals and a classmate named Liz whom he has a crush on.

Parker next heads back to the Big Apple to make Davis reveal Toomes’ location. That leads us to the Staten Island Ferry where Parker captures Toomes’ newest client, Mac Gargan. Toomes is there, but escapes after a dud weapon goes boom, and tears the ferry in two. Stark shows up to help Parker save the passengers, but takes away his super suit as a result of his recklessness.

So, Parker returns to high school where he works up the courage to ask Liz to go to the homecoming dance with him. Of course, on the night of the dance, Parker learns that Toomes is Liz’s father…go figure.

Toomes is no dummy, and he discerns Parker’s super secret identity based only on Liz’s account of him. He takes the opportunity to threaten Parker with retaliation if he interferes with his plans ever again.

During the dance, Parker now does the discerning. He figures that Toomes is planning to hijack a D.O.D.C. plane transporting weapons from Avengers Tower to their new headquarters. He slips into something a bit more comfortable, his old homemade Spider-Man suit, and sets out after Toomes.

Schultz is there to shock Spidey, but Parker defeats him with Ned’s help. Once he makes it to Toomes’ HQ, Toomes destroys the building’s support beams; leaving Parker to die alone.

Fear not, friends! Parker escapes the rubble, and then intercepts the D.O.D.C. plane where he steers it to safely crash on the beach near Coney Island. He and Toomes resume their fight, and it only ends when Parker saves Toomes once his damaged Vulture suit explodes. He leaves Toomes for the police along with the plane’s cargo.

After her father’s arrest, Liz moves away from NYC…so daddy is both a criminal AND a cock block! Stark officially invites Parker to be a full-time Avenger which Sony Pictures forces him to politely decline. So, Stark does the next best thing; he proposes to Pepper Potts. He’s not a complete dick though. He does give Parker back his special Spidey suit which he puts on in his bedroom just as his Aunt May walks in. WTF?!

In a mid-credits scene, we find Mac Gargan confronting Adrian Toomes in prison. He has some friends that would like to kill Spider-Man, and he heard a rumor that Toomes knows his secret identity. Toomes denies it, and leaves to see his family.

In a post-credits scene, Captain America films a public service announcement on one of the most valuable traits a solider or student can have: Patience. Sometimes patience is the key to victory. Sometimes it’s leads to very little. It seems like it’s not worth it, and you wonder, why you waited so long for something so disappointing.