Spirited Away is the tale of a ten-year-old girl named Chihiro. After her family finds a hidden amusement park, she falls into a secret world which transforms her parents into pigs. Now she must navigate the strange world to save her parents from a witch who seeks to prevent her from returning to the human world. 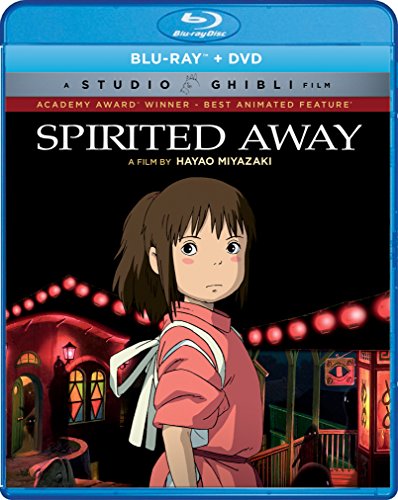 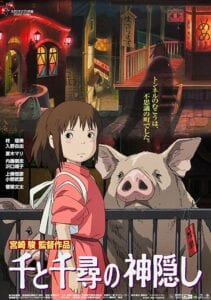 In Spirited Away, 10-year-old Chihiro Ogino and her parents travel to their new home. However, they are running behind. To make up for lost time, her father takes a shortcut. It leads them to what appears to be an abandoned amusement park. Chihiro’s father wants to explore the place a bit—even though they are late to meet their movers.

When they come across a seemingly empty restaurant full of food, Chihiro’s parents have a little feast for themselves. Meanwhile, Chihiro finds an intersting bathhouse where she meets a boy named Haku. He gives her a cryptic message to return across the riverbed before sunset. However, when Chihiro returns to her parents, she finds they have somehow transformed into pigs. To make matters worse, the river is now flooded, and she can not cross to the other side.

Haku spots Chihiro, and tells her to ask the bathhouse’s boiler-man, Kamaji, but Kamaji won’t hire her. Instead, he has his worker, Lin, take Chihiro to Yubaba—the witch who runs the bathhouse. Yubaba gives Chihiro a contract to work for her, and renames her Sen.

While visiting her parents’ pigpen, Haku arrives to give Sen a goodbye card she had with her originally. Sen finds that she’s already forgotten her real name, but that’s what Yubaba does. She takes children’s names away from them to control them. Haku has forgotten his, and will never be able to leave the spirit world. He warns Sen not to let that happen to her too.

At the park, all the workers discriminate against Sen. They dislike her because she’s not yet a spirit—only Haku and Lin have any empathy for her. As she works away, she spots a silent-looking creature named No-Face, and invites him inside because she thinks he’s a customer. As she does, a stink spirit—the spirit of a polluted river—arrives, and Sen cleans him.

The spirit shows his gratitude towards Sen with a magic dumpling. Meanwhile, No-Face uses the gold the stink spirit left behind to tempt an unsuspecting worker with it. Then, he swallows him, demands food, and tips them all. He then swallows two more workers when they try to interrupt with his conversation with Sen.

Later, Sen sees paper Shikigami attack a Japanese dragon, she recognizes the dragon as a transformed Haku. Haku winds up seriously injured, and he crashes into Yubaba’s penthouse. Sen goes to him upstairs where a stowaway shikigami hops off her back. There, it transforms into Zeniba, Yubaba’s twin sister.

Zeniba then transforms Yubaba’s son, Boh, into a mouse, and Yubaba’s harpy into a tiny bird. Zeniba reveals to Sen that Haku stole a magic golden seal from her, and it carries a deadly curse. Haku attacks the shikigami to make Zeniba’s image disappear.

Haku falls into the boiler room with Sen, Boh, and the harpy on his back. Sen feeds him part of the magic dumpling she was going to give her parents. It causes Haku to vomit both the seal and a black slug, which Sen immediately crushes to death with her foot.

While Haku lies there unconscious, Sen promises herself to return the seal to Zeniba and apologize. Back in the bathhouse, Sen now has to deal with No-Face. He’s grown to a massive size from eating everything, so she gives him the rest of her dumpling. As No-Face follows Sen out of the bathhouse, he begins to regurgitate everything he’s eaten.

Sen, No-Face, Boh, and the harpy travel to see Zeniba with train tickets Kamaji gave her. While out, Yubaba orders the slaughter of Sen’s parents. When Haku reveals that Boh is missing, he offers to bring him back if Yubaba releases Sen and her parents. Yubaba agrees, but only if Sen passes one final test.

Sen, No-Face, Boh, and the harpy find Zeniba, and she tells Sen that her love for Haku broke her curse, and Yubaba used the black slug to take control of Haku. Soon Haku appears at Zeniba’s home in his dragon form and flies Sen, Boh, and the harpy back to the bathhouse. No-Face, for his part, decides to stay behind as Zeniba’s spinner.

On the flight back, Sen remembers falling years ago into the Kohaku River where she safely washed back to shore—correctly guessing Haku’s real identity is the spirit of the Kohaku River.

Once they arrive at the bathhouse, Yubaba gives Sen her final test. She must identify her parents from among a large group of pigs in order to break their curse. Sen looks around before correctly answering that none of the pigs are her parents. Her contract immediately bursts into flames, and Yubaba gives her back her real name.

Haku takes Chihiro back to the now-dry riverbed where he vows to meet her again. She crosses it which restores her parents to their human form. The two don’t remember anything after eating at the restaurant. As they walk back to their car, they find it now covered in dust and leaves. Before getting in, we see Chihiro still wearing a hairband No-Face spun for her at Zeniba’s home.

That is Hayao Miyazaki‘s Spirited Away.