In Spring Break, Stu & O.T. are two studs from the big city who arrive in Fort Lauderdale for spring break. They soon find that a couple of college nerds named Nelson & Adam discover already occupy the room the boys reserved at the over-crowded motel. With little choice, Nelson & Adam reluctantly agree to share the room with Stu & O.T. in return for the guy showing them a good time. Unfortunately, Nelson’s controlling step-dad shows up to spoil wet-T-shirt contests and beer-guzzling debauchery. While he tries to shut down the motel, they boy just look to have a little fun. 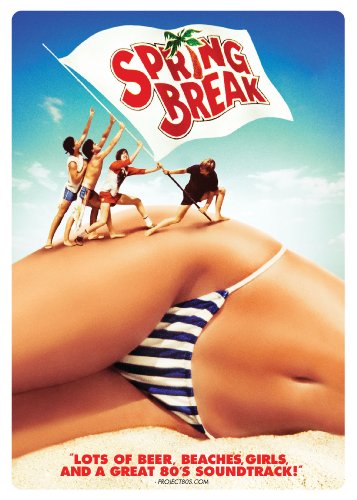 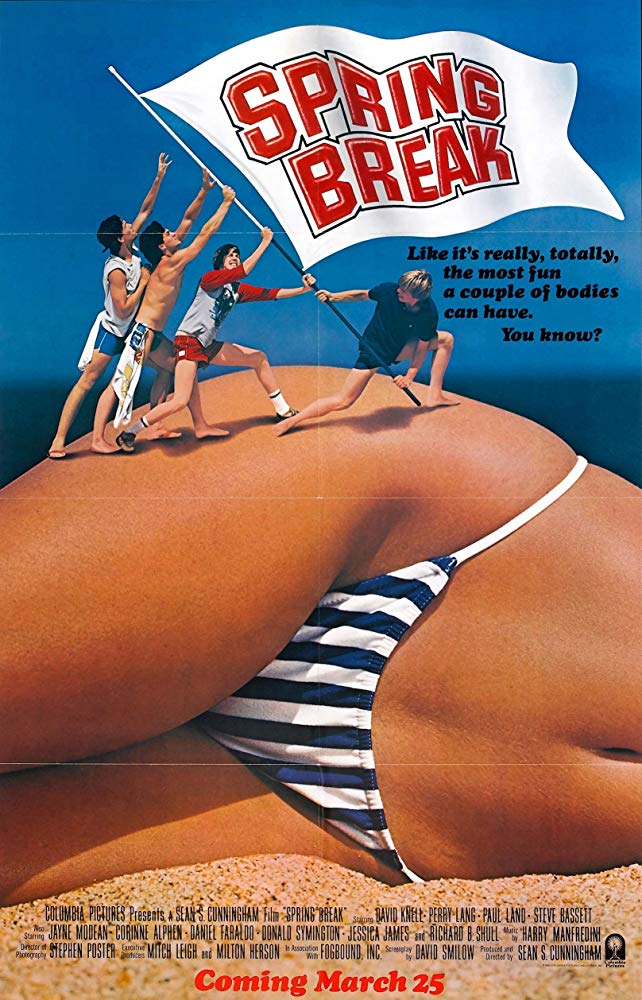 There is a time honored tradition in the United States where college students hit the roads in late March and early April to seek out sunny, beach covered destinations to work on their tans, consume copious amounts of alcohol, and have sex as often as possible. Yes, that time honored tradition was successfully brought the big screen in 1983’s teen comedy, Spring Break.

Spring Break follows the antics of two friends, Nelson (David Knell) and Adam (Perry Lang), who leave their cold wintery Midwestern College, where every tit is covered by a shirt and two sweaters, for the premiere Spring Break destination, Ft. Lauderdale, Florida. Shortly after arriving at the Breeze’n’Seas Motel, Nelson and Adam find out their room was doubled booked. Stu (Paul Land) and O.T. (Steve Bassett), two professionally cool Brooklynites, who are taking a siesta from their three jobs, decide to invite themselves to share one small room with Adam and Nelson. Luckily for the quartet, they quickly learn that they are all in town to get drunk, party hard, and get laid, which essentially squashes the double booking issue.

While the Four Horsemen of Fort Lauderdale kill off kegs of beer, conquer belly flop competitions, and uncover pairs of Playboy tits, Nelson’s power hungry stepfather boats his way to the the Spring Break destination to give a keynote political speech and try buy Breeze’n’Seas Motel using every underhanded method necessary. While harmlessly cruising the Fort Lauderdale strip, Nelson and Adam are photographed and put on the front page of the local newspaper. Nelson’s douchebag stepdad freaks out and sends his henchmen on a Sarah Conner-esque hunt for Nelson.

To help showcase the film’s classic 1980’s music montages, the boys decide to “hit the beach,” where they encounter playful co-eds, weight lifting guerrillas and the extraordinary buxom beauty, Joan (Corinne Aphen). Believe me, Joan will have you singing “I wanna do it you!” by the end of this flick.

The boys move on to a local night club called The Button to experience the annual “Spring Games.” There, the co-ed boxing, wet shirt, and banana eating competitions continue to prove that Miller High Life chugging college students have “the competitive spirit that makes America great.” During the games, Nelson meets his dream girl, Susie (Jayne Modean), a beautiful Ohio State student who loves to play Galaga, drink beer, and have promiscuous sex. However, Nelson’s dream is shattered when he gets lost in Susie’s hotel while buying a case of Cokes from the vending machine and jamming out to .38 Special. He gets booted from the hotel, thinking he will never see Susie again. Fortunately, Nelson spots Susie showcasing her six pack abs in a bikini competition the very next day and the cute couple reconnects.

During a pool party at the Sea’N’Breeze, Joan passionately sings that everyone should “have some fun tonight,” while the stepdad’s henchmen show up and try to kidnap Nelson. Nelson and Susie are able to escape in O.T.’s car and head for the beach. After Nelson has his pants ripped off by a horny alligator, he and Susie make sweet, sweet love on the empty beach. Unfortunately, during the coitus, the henchmen track down Nelson, capture him, and eventually hold him hostage on the stepdad’s boat. The henchmen then bribe a health inspector to shut down the Sea’N’Breeze and Spring Break appears to be doomed for everyone.

Susie informs Adam, Stu, and O.T. that Nelson was kidnapped, so they put a plan into play to save their buddy and the motel from the evil stepdad. O.T. sneaks onto the boat, a la Martin Sheen in Apocalypse Now, beats up the henchmen, and rescues Nelson. This mission is the catalyst for the next phase of the plan, at the motel, where the staffers and college kids literally put the spotlight on stepdad and his henchmen, Friday the 13th style. When the heat is put on the health inspector, he confesses that he was bribed by the henchmen, using stepdads money, to illegally shut down the motel. Nelson forces his stepdad in to keep the motel open, then allows all of his friends to cover stepdad with Miller High Life. A beer soaked stepdad is eventually pulled over and arrested by the police for driving while under the influence.

User Rating: Be the first one !
May 18, 2019
4 minutes read
Show More
Back to top button
Close
Close