St. Vincent stars Bill Murray as Vincent MacKenna, a crusty old man who ends up caring for the son of his new neighbor Maggie. Although he’s a cynic who gambles, drinks, and frequents strip clubs, Vincent turns out to be exactly the mentor the 12-year-old kid needs as the young boy adjusts to his parents’ divorce, and life at a new school. When Vincent’s wife passes away and he suffers a stroke, he learns how much he has affected the lives of those around him. 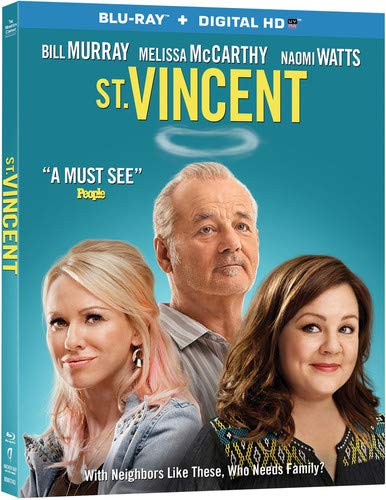 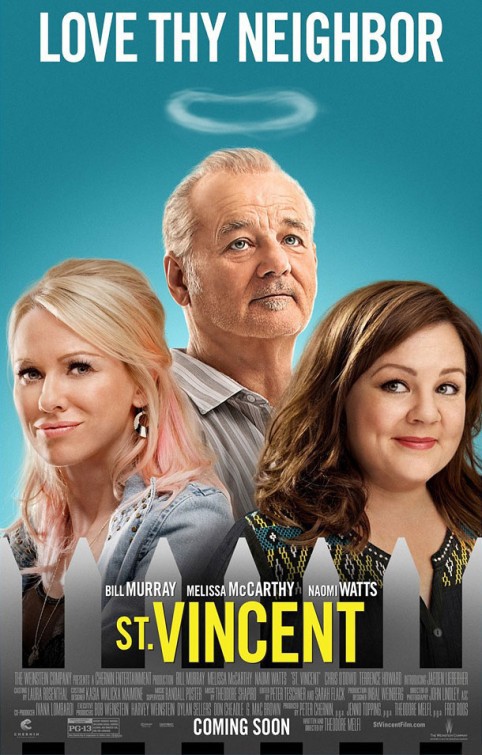 Vincent MacKenna (Bill Murray) is a hard man to like. He smokes, drinks, and gambles too much for his lifestyle. Vincent’s wife, Sandy (Donna Mitchell), has Alzheimer’s and no longer recognizes Vincent. She lives in an expensive rehabilitation facility which is the primary reason for Vincent’s financial troubles. He visits Sandy often and poses as a doctor. He also does her laundry for her between visits. Other than his wife, Vincent has very few friends, although he has some acquaintances who care about him. His primary companions are his cat Felix and a pregnant Russian sex worker, Daka (Naomi Watts).

Single mom Maggie Bronstein (Melissa McCarthy) moves in next door to Vincent with her adopted son Oliver (Jaeden Martell). Maggie’s moving truck damages Vincent’s tree and car. Vincent demands payment for the damage. Maggie is in a custody fight for Oliver. She is a radiology tech at the local hospital, but she is forced to work late quite often in order to make ends meet at home.

Oliver attends a nearby Catholic school. Oliver is intelligent and friendly, but he is still picked on by other kids at the school. On his first day, Oliver’s phone, wallet, house keys, and school uniform are stolen by a school bully named Robert (Dario Barosso). Oliver knocks on Vincent’s door and asks if he can stay there until his mother gets home from work. Vincent agrees to babysit for a fee. Vincent begins picking Oliver up from school every day and taking the boy out for after-school activities such as drinking at bars or betting on horses.

Over time, the pair begin to develop an unlikely friendship. After rescuing Oliver from Robert, he teaches Oliver how to defend himself. Oliver uses the training to break Robert’s nose on one occasion. Strangely, Oliver and Robert become friends as a result of the fight. Vincent also takes Oliver to the horse track on one occasion and the pair win a few thousand dollars on a trifecta bet. Vincent keeps some of the money to pay off debts but places $2,700.00 into a savings account for Oliver.

A few days later, Vincent is informed by the nursing home that Sandy is going to be evicted due to nonpayment by Vincent. He takes Oliver’s money out of the bank and places it all on one bet, which he loses. Vincent returns home that night to find loan sharks Zucko (Terrance Howard) and Antwan (James Andrew O’Connor) in his house. Zucko wants the money that Vincent owes him and threatens to take it. Vincent suddenly collapses on the floor before any blows are thrown and appears to be in distress. The loan sharks leave, and Oliver finds the unconscious Vincent on the floor and calls for an ambulance.

Vincent wakes up in the hospital to the sound of Maggie’s voice as he is going through an MRI. Vincent is told that he had a stroke and will require physical therapy. Oliver, Maggie, and Daka help Vincent recover from the stroke and take care of him. Vincent struggles with his language skills and walks with a limp when he gets out of the hospital.

Shortly after Vincent is released from the hospital, Maggie goes to family court over custody of Oliver with Oliver’s dad, David Bronstein (Scott Adsit). The judge takes issue with Vincent’s time with Oliver, specifically the gambling, drinking, cussing, fighting, and associating with prostitutes such as Daka. Maggie is shocked since she didn’t know anything about Vincent’s activities with Oliver. The judge orders joint custody between Maggie and Oliver’s adopted father. Maggie is furious with Vincent and forbids him from spending time with Oliver.

Vincent goes through turmoil himself as well. Vincent learns that his wife died while he was in the hospital. To make matters worse, the nursing home cremated Sandy’s body in compliance with her wishes, which exacerbates Vincent’s grief.

Oliver works on a school project where he nominates a person for sainthood. Oliver interviews people in the neighborhood about Vincent. Oliver believes that Vincent meets his teacher’s (Chris O’Dowd) definition of sainthood as a person showing “commitment and dedication” and some sacrifice. Oliver believes that Vincent’s care of his wife, as well as the fact that he saved two soldiers during his time in Vietnam qualifies him. Daka tricks Vincent into attending the school presentation. Oliver ends his speech and present Vincent with a medal, and the audience applauds.

Sometime later, Daka gives birth to a baby girl. The film ends with Daka, her baby, Maggie, Oliver, and Robert enjoying a meal at Vincent’s house. They eat and laugh together.