In the 24th Century, the Borg, a race of cybernetically enhanced beings driven by universal conquest, travel back in time intent on preventing Earth’s first contact with an alien species. Captain Jean-Luc Picard and the crew of the U.S.S. Enterprise pursue them to ensure that the historic Zefram Cochrane makes his maiden flight reaching warp speed. However, Picard’s memories of his time as a member of the Borg Collective have led to an obsession with the Borg. Will Picard save humanity’s future or will he seek his personal revenge? 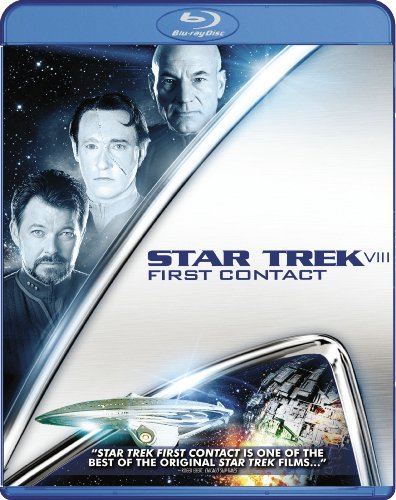 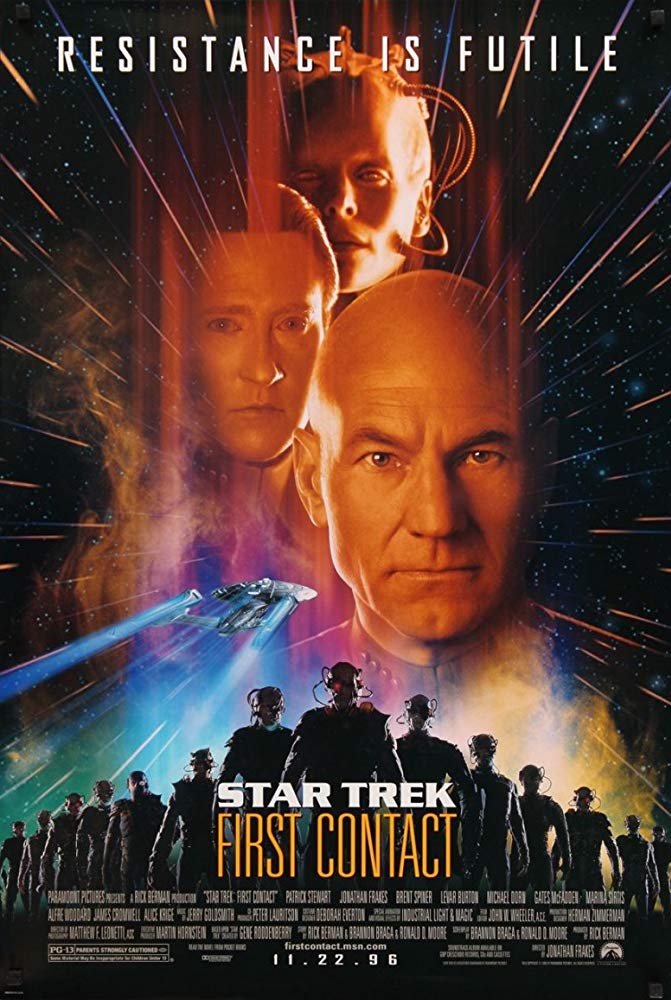 Star Trek: First Contact takes place in the 24th Century with Captain Jean-Luc Picard (Patrick Stewart) having reoccurring nightmares of his assimilation by the Borg six years earlier. The Borg are a race of cybernetically enhanced beings driven by universal conquest. Picard is contacted by Admiral Hayes, who informs the Enterprise captain of a new Borg invasion heading towards Earth. Hayes orders the Enterprise to patrol the Romulan-Federation Neutral Zone. Picard informs his crew that Starfleet is apprehensive of having Picard involved in anything to do with the Borg due to his prior assimilation.

The Borg ship and the Enterprise both arrive on April 4, 2063, the day before humanity’s first encounter with alien life. The encounter occurs after Zefram Cochrane’s (James Cromwell) historic warp drive flight which signifies that humanity is about to engage in space exploration. The Enterprise crew ascertains that the Borg have traveled through time to stop first contact. The Enterprise destroys the Borg sphere and beams a team down to the Cochrane’s base of operations in Montana. Picard encounters Lily Sloane (Alfre Woodard), Cochrane’s assistant, who is suffering from radiation exposure and needs medical treatment onboard the Enterprise. Initially, Cochrane cannot be located.

Meanwhile, Riker locates Cochrane thanks to a drunk Counselor Deanna Troi (Marina Sirtis). Cochrane is not the heroic figure that the history books portray him as. He is a reluctant scientist that hates to fly and only built the Phoenix’s warp drive to line his own pockets with cash. Riker and Lieutenant Commander Geordi La Forge (LeVar Burton) violate their own ethics and tell Cochrane of his destiny. The scientist becomes frightened and tries to run off, causing Riker and La Forge to bring him back.

Back on the Enterprise, Picard finds that the Borg have taken over many of the lower decks, including the engineering section. Picard, Worf, and Data lead combat teams to engineering in an attempt to release a corrosive gas that will destroy the organic portions of the Borg invaders. The team is unsuccessful and Data is captured. Picard becomes separated from the other crewmembers during the retreat and encounters Lily who has also become separated from Dr. Beverly Crusher’s (Gates McFadden) sick bay team. Picard and Lily team up to make their way through the Borg assimilated portions of the Enterprise. Along the way, Picard is able to discover that the Borg intend to use the Enterprise’s deflector dish to send a message to the Borg collective in the 21st Century to come to Earth and assimilate it.

Meanwhile, Data is imprisoned in the engineering room. The Borg Queen (Alice Krige), the leader of the Borg Collective, offers to give Data human skin in exchange for the access codes to the Enterprise’s computer core. Data initially rejects her offer and tries to escape, but reconsiders after he has sex with the Borg Queen.

Picard, Worf, and Lieutenant Hawk (Neal McDonough) use space suits to stop the Borg from using the deflector dish for their message. They are successful and destroy the dish and the Borg working on it. However, Hawk is assimilated and Worf is forced to kill him with a phaser. Once Picard returns to the bridge, his crew informs him that the Borg are intensifying their attacks and taking control of more of the Enterprise. Picard orders his men to stand their ground, while Worf suggests destroying the Enterprise. Picard calls him a coward and sends him away. Lily confronts Picard about the futility of staying on the ship. She assesses, correctly, that Picard is obsessed with revenge on the Borg for what they did to him, equating him to Captain Ahab in Moby Dick. Realizing his irrational behavior, Picard orders the evacuation of the Enterprise and initiates the ship’s self-destruct sequence. The crew abandons ship, but Picard remains to rescue Data.

Back on Earth, Cochrane, Riker, and La Forge launch the Phoenix into orbit and prepare to activate the ship’s warp drive. At the same time, Picard discovers the presence of the Borg Queen on the ship. He offers himself in exchange for Data’s freedom. However, Data refuses to leave and states that he wishes to join the collective. Data unlocks the computer core and fires quantum torpedoes at the Phoenix. The torpedoes miss the Phoenix revealing Data’s ruse. Data punctures the corrosive gas tanks which begin to destroy the Borg soldiers and Queen. Picard is able to climb to safety above the gas. Cochrane is able to use his warp drive, and upon his return to Earth, his campsite is visited by a ship full of Vulcans which are attracted by the Phoenix.

Picard says goodbye to Lily before beaming back on board the Enterprise, which returns to the 24th Century. Cochrane and Lily entertain the Vulcans with some alcohol and a little Roy Orbison.