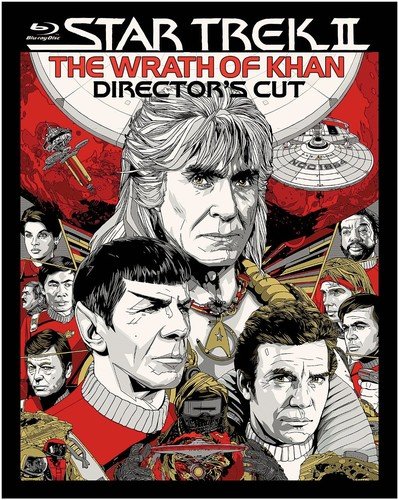 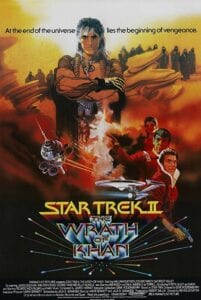 Star Trek II: The Wrath of Khan starts out in the year 2285. Admiral James T. Kirk watches on as Captain Spock’s trainees work through a simulated rescue mission. In it, the Vulcan, Lieutenant Saavik, commands the starship USS Enterprise with orders to save the crew of the damaged ship Kobayashi Maru. However, when Klingon cruisers attack, the ship is critically damaged. The simulation is a known no-win situation designed to test Starfleet officers’ character.

After the training, Kirk’s pal, Dr. McCoy joins the ship to lift Kirk’s spirits up on his birthday. He’s feeling the pressure of time passing him by, and the good doctor advises his buddy to not grow old behind a desk. He should live a little—do something—make some commercials about travel-related purchases such as airline tickets and hotel stays…that sort of thing.

Meanwhile, somewhere in the depths of space, the starship Reliant is searching for a lifeless planet to test their Genesis Device. If it works, the technology will reorganize dead matter into habitable worlds. Two Reliant officers, Commander Pavel Chekov and Captain Clark Terrell, beam down to evaluate the planet they believe to be Ceti Alpha VI. However, once on its surface, a genetically superior tyrant named Khan Noonien Sing has his cult followers capture the officers.

You see, fifteen years ago, there was a TV episode (Space Seed) where the Enterprise happened upon Khan’s ship adrift in space. When Khan and his fellow band of genetic freaks tried to take control of the Enterprise, Kirk exiled Khan and the others to Ceti Alpha V.

However, soon after they were marooned, the neighboring planet, Ceti Alpha VI exploded. Its wake devastated Ceti Alpha V. Now, Khan blames Kirk for his wife’s death, and he has planned his revenge on Kirk ever since.

Khan shoves some indigenous earwigs into Chekov and Terrell heads that makes the men susceptible to his mind control. He then uses them to take control of the Reliant. Once he does, Khan learns of the Genesis Device, and he sets out for the space station Regula I where the device is under construction. Bad news for Kirk as his ex lover, Dr. Carol Marcus, and their son, David, head up the team building it. What a terrible coincidence for the Kirk/Khan family feud!

It seems in the future, you can be anything you want to be unless James T. Kirk wants to be it too. So, when the Enterprise, out on a training cruise, receives a distress call from Regula I, Kirk assumes command of the ship.

En route, the Reliant shows up, and ambushes them; crippling the Enterprise. Khan reveals himself to Kirk, and offers to spare his crew if they hand over all material related to the Genesis Device. Instead, Kirk stalls the madman while his crew remotely lowers the Reliant’s shields; thus enabling the Enterprise to counter-attack. Khan must now retreat while his team repairs his ship.

The Enterprise, for its part, limps over to Regula I to recoup. Kirk, McCoy, and Saavik beam over to the station. They find Terrell and Chekov alive amongst the slaughtered members of Marcus’s team. Carol and David are still alive though; hiding with the Genesis Device deep inside a nearby planetoid.

Khan, still has mind control over Terrell and Chekov, and he orders them to kill Kirk. Terrell resists the earwig’s power, and shoots himself. Chekov, on the other hand, collapses like a dainty little girl as the earwig crawls out of his head.

Khan locates the Genesis Device, and he transports it aboard the Reliant. To get his final revenge on Kirk, he intends on marooning him on that lifeless planetoid. However, Kirk and Spock have made other secret coded arrangements, and they escape back to the Enterprise.

Now, Kirk orders the Enterprise into the nearby Mutara Nebula. The conditions inside it render all shields and targeting systems useless; making both damaged ships equally matched. Spock reveals that Khan’s tactics show he is very inexperienced in three-dimensional combat. This pleases Kirk, and he uses that knowledge to disable the Reliant.

This attack succeeds, and with Khan mortally wounded, he decides to get the last laugh. Khan activates the Genesis Device which begins to reorganize all matter in the nebula with the Enterprise still in it.

Although the Enterprise detects the device’s activation, they are not able to escape the nebula since the ship’s warp drive is inoperable. Spock sacrifices himself, and heads to the engine room to restore the warp power as “Logic clearly dictates that the needs of the many outweigh the needs of the few.”

When McCoy tries to prevent Spock from entering the warp drive’s area, Spock whips out his old Vulcan nerve pinch trick to incapacitate him. He then performs a mind meld; telling him to remember…very dramatic. Spock repairs the warp drive, and Enterprise escapes the explosion as the Genesis Device coalesces the nebula’s matter into a new planet called Bob. Well, not really. You can’t call a planet Bob.

As a weakened Spock sits on the ground, dying from radiation poisoning, he tells Kirk not to grieve. His decision to sacrifice himself to save the ship’s crew was a logical one. After he passes, the crew holds a burial at space for him. The Enterprise shoots the coffin into orbit around the new planet, and then leaves to pick up the remnants of Reliant’s marooned crew from Ceti Alpha V. Spock’s coffin lands softly on the newborn Genesis Planet.