Star Trek III: The Search for Spock, begins after Admiral Kirk defeats Khan Noonien Singh and the aftermath creates the Genesis Planet. With his best friend, Spock, dead, and Dr. McCoy acting more and more insane, his recent victories ring hallow. It’s not until Spock’s father, Sarek, suddenly arrives to provide a startling revelation; McCoy harbors Spock’s living essence. With one friend alive and one not; but both in pain, Kirk steals the Enterprise to help his friends. However, Klingons lurk in the region, and they now know about the Genesis Device. Thus begins a race with Kirk which has deadly intentions. 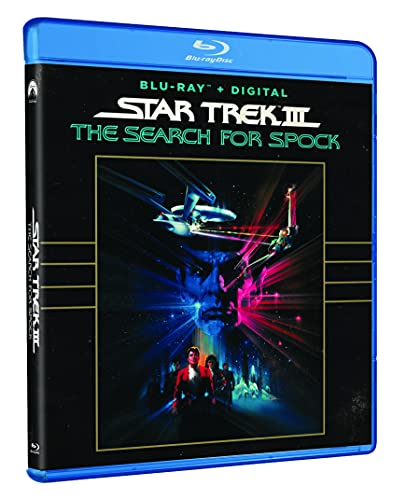 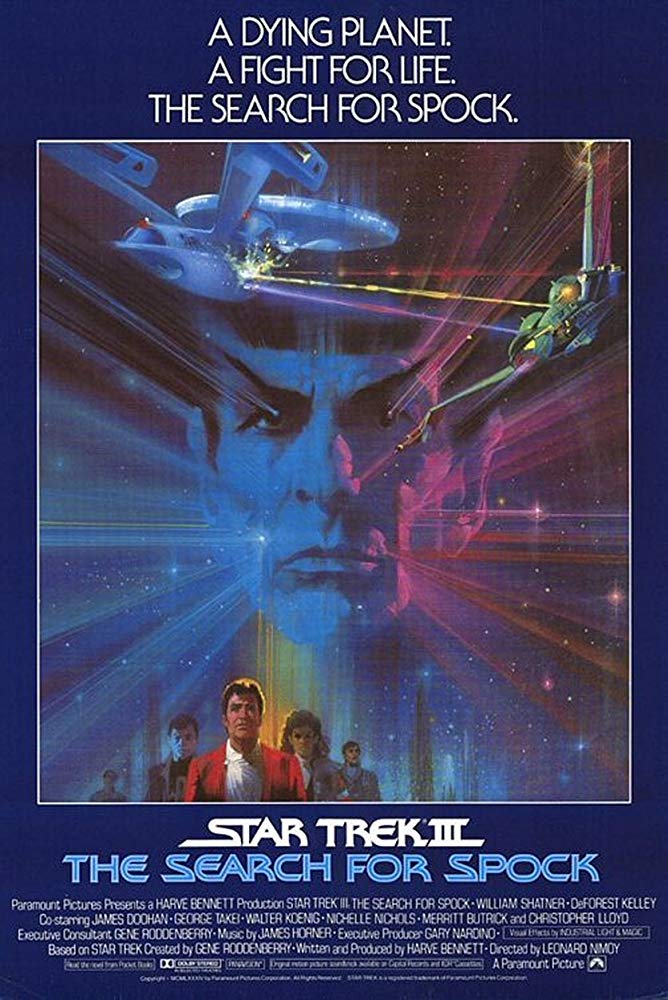 Star Trek III: The Search for Spock begins with Spock (Leonard Nimoy) dead. A very somber Enterprise crew returns to Earth to lick their wounds. Survivors of the attacks by Khan Noonien Singh (Ricardo Montalbán) mourn the loss of their friend and captain. When the Enterprise reaches the space dock orbiting Earth, Admiral James T. Kirk (William Shatner) is alerted that someone has broken into Spock’s sealed quarters. Kirk investigates and finds his friend, Dr. Leonard McCoy (Deforest Kelley), sitting in a dark corner of the room. McCoy asks Kirk why he left him on Genesis. Confused, Kirk asks McCoy what is talking about to which McCoy says “Remember” before collapsing into unconsciousness.

After McCoy is taken to sick bay, Kirk and his crew meet with the commander of Starfleet, Admiral Morrow (Robert Hooks). The admiral commends the crew for their service and awards them with extended shore leave. He also reassigns Commander Montgomery “Scottie” Scott (James Doohan) to Starfleet’s newest ship, the U.S.S. Excelsior. When Scottie states that he would prefer to oversee the refit of the Enterprise, the admiral tells Scottie and Kirk that the Enterprise will be decommissioned. Additionally, the admiral informs them that the entire crew is prohibited from discussing anything related to the newly created Genesis planet.

Meanwhile, Kirk’s son, Dr. David Marcus (Merritt Butrick) and Lieutenant Saavik (Robin Curtis) are onboard the U.S.S. Grissom orbiting Genesis. The two are assigned to investigate and study the unique planet that Dr. Marcus helped to create. While conducting their initial survey, they discover that the planet has a large variety of climates. But more importantly, they discover that the sensors are indicating life signs on the planet, something that should not have developed so quickly.

Dr. Marcus and Saavik beam down to the planet to investigate and discover a small Vulcan child that appears to be the resurrected body of Spock, whose casket soft landed on the planet at the end of Star Trek II: The Wrath of Kahn. Young Spock appears to have no memory. Dr. Marcus explains to Saavik that Spock and the Genesis planet maybe aging quickly due to a short cut that he implemented into the Genesis matrix. Dr. Marcus indicates that the planet may destroy itself within a matter of hours.

In orbit around Genesis, the Grissom is destroyed by a cloaked Klingon bird of prey warship, under the command of Commander Kruge (Christopher Lloyd). Kruge intercepted information about the Genesis Device and sees the experimental science as an effective weapon that he would like to acquire for Klingon Empire. He has traveled to Genesis to gain additional intelligence about Genesis, including how to make a Genesis torpedo. With the crew of Grissom destroyed, Kruge and some of his crew beam down to the planet and capture Dr. Marcus, Saavik, and young Spock to extract the information they need.

Back on Earth, Spock’s father, Sarek (Mark Lenard), confronts Kirk about his son’s death. Sarek is confused as to why Kirk did not return himself and Spock’s body back to Vulcan so that Spock’s katra, or living spirit, could be preserved. When Kirk and Sarek watch the security videos, they discover that Spock transferred his katra to McCoy, not Kirk. Sarek indicates that Spock’s katra and body are needed to lay him to rest on Vulcan, and without help, McCoy will either die or go insane.

Kirk goes to Admiral Morrow and asks for permission to return to Genesis to save McCoy, but his request is denied. Kirk then decides to go anyways, with the help of his crew. His crew secretly works to make the Enterprise automated so that minimal crew can operate the starship. Once McCoy is broken out of jail, Kirk, McCoy, Scottie, Chekov (Walter Koenig), and Sulu (George Takei) steal the Enterprise and head off to Genesis.

With both ships dead in space, Kruge threatens to kill his hostages on the planet if Kirk does not surrender his ship as well as any information about the Genesis device. To prove his sincerity, he has his men kill Kirk’s son. Despondent over his loss, Kirk offers to surrender his ship to Kruge, but not before setting the ship to self-destruct. The Enterprise crew then safely beams down to the planet, while almost the entirety of Kruge’s men are killed when the Enterprise explodes in orbit.

Once on the planet, Kirk and the crew find and kill the Klingon officers guarding Saavik and the now entirely adult Spock. With the planet deteriorating around him, Kirk lures Kruge down to the planet with promises of the Genesis information. Once Kruge beams down, he has his last remaining officer (John Larroquette) beam Saavik and the other Enterprise officers onboard the Klingon ship, leaving only Kirk, Spock, and Kruge on the planet. Kirk and Kruge engage in around of fisticuffs before Kirk kicks Kruge into some hot liquid magma. Kirk impersonates Kruge and has himself and Spock beamed on board the Klingon ship. After imprisoning the only remaining Klingon officer, the Enterprise sets course for Vulcan to save Spock and McCoy.

Once on Vulcan, Spock and McCoy undergo an ancient and very dangerous procedure to reunite Spock’s katra with his leaving body. The ceremony is successful and McCoy is out of danger. Spock’s body is alive and well, but Sarek tells Kirk that it may take some time for Spock’s mind to heal. When Spock passes by Kirk, he stops to talk to his former captain. Spock begins to remember the last few minutes of his first life, but more importantly, he remembers that Kirk’s name is Jim. With all indications that Spock is going to be okay, his friends joyfully gather around him to celebrate.