In Star Trek: Insurrection, the crew of the Enterprise-E are back. This time, Picard is confronted with orders that undermine Starfleet’s Prime Directive, the Federation’s bedrock principle of non-interference. If he obeys, six hundred peaceful residents of Ba’ku will be forcibly removed from their remarkable world, all for the reportedly greater good of millions who will benefit from the Ba’ku’s Fountain of Youth-like powers. If he disobeys, he will risk his starship, his career, his life. But for Picard, there’s really only one choice. He must rebel against Starfleet, and lead the insurrection to preserve Paradise. 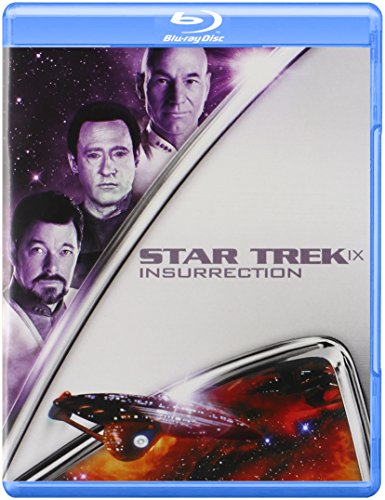 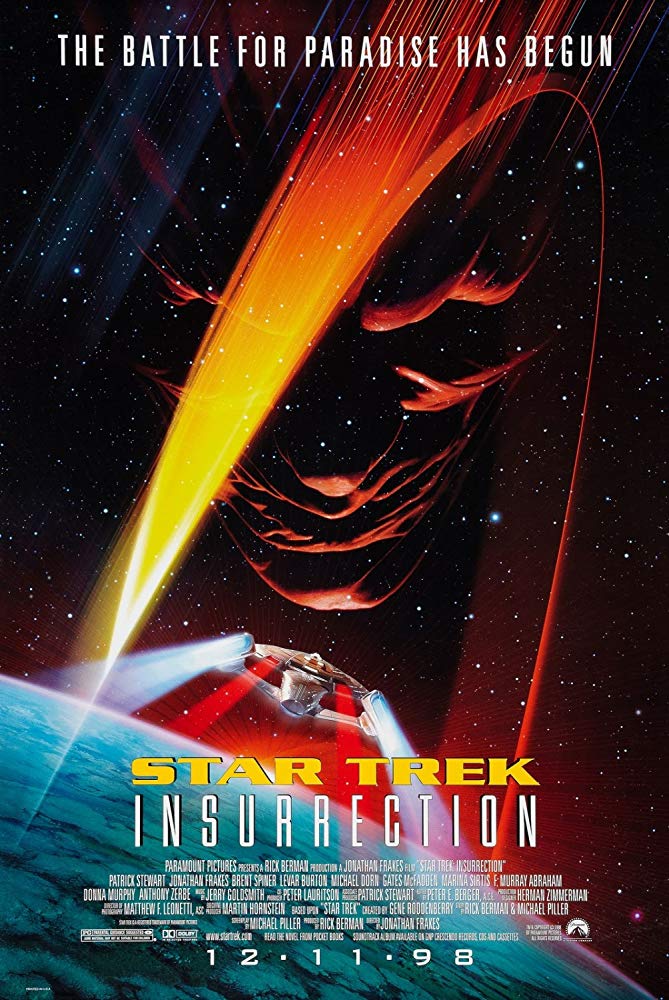 Star Trek: Insurrection begins on the planet Ba’ku. Lieutenant Commander Data (Brent Spiner) reveals the presence of a joint Federation and Son’a task force that has been clandestinely surveilling the Ba’ku race for some time. Admiral Matthew Dougherty (Anthony Zerbe), the Federation leader of the surveillance mission, contacts Data’s commanding officer, Captain Jean-Luc Picard (Patrick Stewart), on board the U.S.S. Enterprise-E several light years away. Dougherty asks for Data’s schematics and insists that the presence of the Enterprise is not needed when Picard offers his assistance. However, Picard ignores the directive and sets course for Ba’ku.

Picard and his crew create a plan to capture Data using Picard, visiting Lieutenant Commander Worf (Michael Dorn), and a shuttle craft. Picard’s plan is successful, and he and Worf are able to deactivate Data. Once Lieutenant Commander Geordi La Forge (LeVar Burton) has an opportunity to examine Data, he discovers that Data has been shot with a phaser. Data is repaired, but has no memory of his actions. Picard and Data return to the planet to investigate Data’s malfunction. They discover that the Ba’ku inhabitants are aware of advanced technology, but have rejected its use to live simpler lives. They also discover that the metaphasic particles within the planet’s rings effectively make anyone on the planet immortal. Even the Enterprise crew begin to feel the effects of the particles in the short time they have been there.

A Ba’ku woman named Anij assists Data and Picard retrace Data’s steps and they discover a submerged and cloaked Federation ship containing a holodeck set to recreate the Ba’ku home village. The trio is attacked by Son’a soldiers which Picard and Data are able to subdue. The duo determine that it was the Son’a that shot Data previously. Picard confronts Dougherty with his discoveries and learns that top Federation officers colluded with the Son’a to deceptively move the Ba’ku to the ship and forcibly relocate them to another planet. This would allow the particles to be harvested on a mass scale for future use in medical procedures. However, the harvesting would result in the planet becoming inhospitable. Picard expresses his disgust in the plan, and Dougherty orders the Enterprise and its captain to return to Federation space.

Picard makes the decision to disobey the order and remain on the planet to lead a resistance against the forcible relocation. Picard’s crew decides to join him in his efforts. Data, Worf, Counselor Deanna Troi (Marina Sirtis), and Dr. Beverly Crusher (Gates McFadden) accompany Picard to the planet’s surface while Commander William Riker (Jonathan Frakes) and La Forge take the Enterprise back to Federation space and to contest Starfleet’s commands.

On the planet, Picard attempts to lead the Ba’ku to the mountains where the Son’a will have difficulty beaming them onto the ships. The Son’a use robotic probes to locate and tag the fleeing Ba’ku with enhanced transporter beacons. The Son’a leader, Ahdar Ru’afo (F. Murray Abraham), and Dougherty discover what Picard and the Enterprise are up to, and they decide to send two Son’a ships to prevent the Enterprise from sending their messages. The two ships attack the Enterprise, and Riker is able to defeat the ships and the Enterprise is able to escape to contact Starfleet.

Back on the planet, the Enterprise crew leads many of the Ba’ku to safety in the mountains. However, Picard and Anij are tagged and beamed on board Ru’afo’s ship. Once there, Picard confronts Dougherty again. The admiral begins to rethink their position, but Ru’afo orders the ship to begin harvesting the particles while the Ba’ku are on the planet, an act that will kill anyone still on the planet. Picard and Anij reveal to Dougherty that the Son’a are the descendants of the Ba’ku, who were banished from the planet a century before after they attempted a violent overthrow. Once away from the planet, the Son’a resumed aging and now are forced to rely on medical technology and excessive cosmetic surgery to prevent death. The Son’a now want to acquire the particles to prevent their deaths. Admiral Dougherty is shocked by this revelation and wants to back out of the plan, so Ru’afo kills him.

Ru’afo orders Picard’s execution. However, Picard convinces Ru’afo’s first officer, Gallatin (Gregg Henry), to help him stop Ru’afo. Picard is able to transport the entire Son’a crew onto the holoship, causing them to believe that they are still on their ship and conducting the harvest. Ru’afo discovers the ruse and beams onboard the harvester to manually start the harvesting of the particles. Picard beams aboard to stop him. The two men fight, but Picard is able to set the harvester for self-destruct. The Enterprise returns just in time and beams Picard to safety. Ru’afo is killed in the harvester’s explosion.

Later, the remaining Son’a are forgiven and welcomed back by the Ba’ku while the Enterprise crew celebrates with the Ba’ku. Picard promises Anij that he will return sometime soon before beaming back onboard the Enterprise to head out for their next mission.