Captain Jean-Luc Picard and the crew of the Enterprise-E are back for one final mission. There is a change of leadership in the Romulan Empire after a coup. The Enterprise is diverted to the Romulan home world Romulus when the new leader, Praetor Shinzon, expresses his interest in negotiating a peace treaty with the Federation. However, Picard is shocked when he learns that Shinzon is not only a human, but a clone of Picard. Now Picard must determine whether Shinzon’s claims for peace are genuine, or a ruse to threaten the future of the Federation. 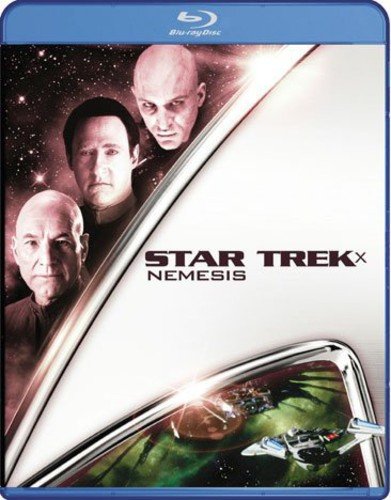 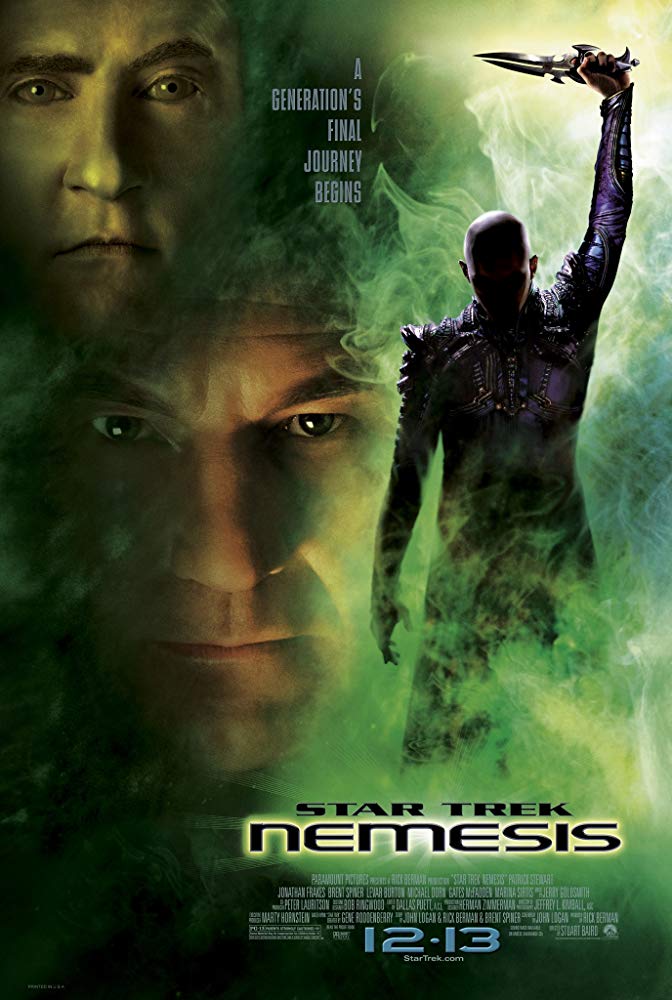 Star Trek: Nemesis begins on the planet Romulus. Members of the Romulan Senate vigorously debate a potential alliance with Shinzon (Tom Hardy), the rebel leader of the Remans. The Remans were previously the slave race of the Romulan Empire, frequently used as miners. The military supports an alliance with Shinzon, believing that his military might will make the Romulans stronger. However, Praetor Hiren (Alan Hale) and most of the Senate are opposed to an alliance, believing that the Remans, and specifically Shinzon, can’t be trusted. The Senate votes to reject any alliance. An ally for Shinzon leaves a device in the Senate chamber that releases a wave of deadly thalaron radiation which disintegrates the Praetor and almost the entire Senate.

Meanwhile, the crew of the U.S.S. Enterprise-E has gathered on Earth for the Earth wedding ceremony of Commander William Riker (Jonathan Frakes) and Counselor Deanna Troi (Marina Sirtis). Old friends, such as Guinan (Whoopi Goldberg) and Wesley Crusher (Wil Wheaton), join the slightly hung over crew for the joyous occasion. After the wedding, the crew heads to Betazed for a second wedding ceremony with Troi’s family. Lieutenant Commander Geordi La Forge (LeVar Burton) detects a positronic energy reading from a planet near the Romulan Neutral Zone. The only source of positronic energy that is known to the Federation are androids such as Lieutenant Commander Data (Brent Spiner). Captain Jean-Luc Picard (Patrick Stewart) orders the Enterprise to investigate.

Once they are in orbit around the planet, Picard, Data, and Lieutenant Commander Worf (Michael Dorn) take the shuttle craft known as the Captain’s Yacht down to the planet to investigate. They land on the planet and discover a disassembled android similar to Data. Once back on board, the reassembled droid identifies itself as B-4 (Brent Spiner). The android does not appear to be as advanced as Data nor does it learn like Data does.

The Enterprise is contacted by Admiral Kathryn Janeway (Kate Mulgrew) and ordered on a diplomatic mission to nearby Romulus. Their mission is to meet with the new head of the Romulan Empire, Praetor Shinzon. The Reman has taken over the Empire in a coup and has announced his intentions to negotiate a peace treaty with the Federation. Once Picard’s team beams down to Romulus, they learn that Shinzon is not only a human, but that he is a clone of Picard. Picard meets with Shinzon individually and learns that the Romulans created Shinzon to replace Picard as Captain. The Romulans intended to have Shinzon work as a spy, but ultimately abandoned the plan and exiled Shinzon to Remus to be raised among the Remans, who he eventually led to a rebellion. The Remans built Shinzon’s command ship, the Scimitar, a very large and powerful starship. La Forge tells Picard that he is detecting low levels of thalaron radiation coming from the Scimitar.

Back on the Enterprise, Dr. Beverly Crusher (Gates McFadden) informs Picard that her analysis of Shinzon’s blood indicates that Shinzon is aging rapidly and he will die soon unless he has a transfusion of Picard’s blood. The crew also detects an authorized access to the Enterprise computers that Data deduces was B-4. Shinzon also uses his Reman viceroy (Ron Perlman) to violate Troi’s mind using telepathy to commit a psychic rape on her.

Shinzon kidnaps Picard and B-4 and has them teleported to the Scimitar. The ship cloaks itself so that the Enterprise can’t detect them. On board the Reman ship, Shinzon reveals his need for a transfusion from Picard and that he planted B-4 on the planet to lure Picard to investigate. Data reveals that he has replaced B-4 having learned of his deception. Data frees Picard and the two men escape the Scimitar in a Reman shuttle craft. The two men learn enough about the thalaron radiation generator on the Scimitar to know that it can kill all life on Earth.

Scimitar orders his damaged ship to prepare to fire the thalaron weapon at the Enterprise. Picard beams aboard the Scimitar alone to face Shinzon and destroy the weapon. The transporter goes offline after Picard beams over. Data leaps through space to get to the Scimitar and save Picard. On board the ship, Picard and Shinzon battle, with Picard impaling the Reman leader on a metal strut. Data arrives just before the Scimitar prepares to fire the thalaron weapon. He places an emergency one person transporter on Picard and sends him back to the Enterprise after he says goodbye. Data then turns and fires his phaser at the weapon which destroys the Scimitar and Data before the ship can fire. On board the Enterprise, Picard and the crew are devastated by Data’s death.

A short time later, the Enterprise is in space dock orbiting Earth undergoing repairs. Picard and the crew have a ceremony to celebrate Data’s life. Picard also says goodbye to Riker who is leaving to command the U.S.S. Titan. Riker’s first mission is to assist Romulus with rebuilding. Picard also meets with the reassembled B-4 to tell him about his “brother” and his sacrifice. B-4 struggles to understand. However, Data transferred his memory bank into B-4 before he boarded the Scimitar. As Picard begins to leave, B-4 begins to sing “Blue Skies”, the song that Data sang at Riker and Troi’s wedding ceremony. Picard smiles and leaves B-4 in his quarters, hopeful for the future.