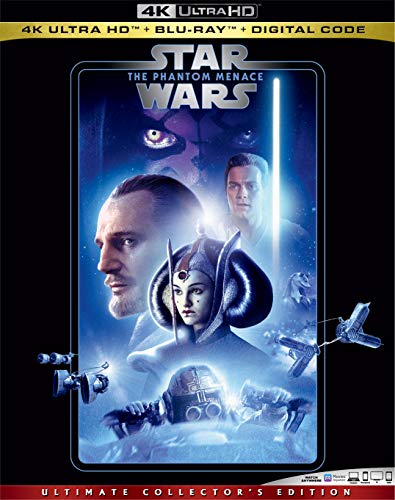 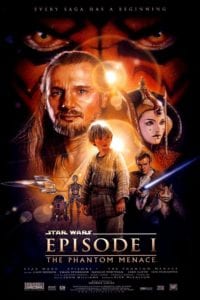 When the Trade Federation sets up a blockade around the planet Naboo in order to invade it, Supreme Chancellor Valorum sends Jedi Master Qui-Gon Jinn and his apprentice, Obi-Wan Kenobi, to negotiate peace with the Trade Federation’s Viceroy, Nute Gunray.

Unbeknownst to them, the Trade Federation has entered into a secret pact with the Sith Lord, Darth Sidious, and he orders the Viceroy to kill the Jedi, and invade Naboo using their battle droids. The Jedi escape the attempt on their lives, and escape to Naboo on one of their invading ships. Down on the planet, Qui-Gon saves a Gungan named Jar Jar Binks from a transport running him over.

Jar Jar takes the Jedi to hide out in the underwater city of Otoh Gunga. There, Qui-Gon
attempts to enlist the Gungan’s leader, Boss Nass, to help the Naboo on the surface, but he’s unsuccessful. Boss Nass gives them a transport to Naboo’s capital city of Theed, and allows them to take Jar Jar with them as he now owes Qui-Gon a life debt.

Once there, the Jedi rescue Naboo’s queen, Padmé Amidala, and they escape through the Trade Federation’s blockade in the queen’s J-type 327 Nubian royal starship with hopes of reaching the Republic capital planet of Coruscant.

However, the Federation knocks out the ship’s hyperdrive as they pass through the blockade. They are forced to land on the nearby desert planet of Tatooine to make repairs. On the planet, Qui-Gon, Jar Jar, an astromech droid named R2-D2, and Padmé (disguised as one of her handmaidens) visit the village of Mos Espa to purchase spare parts for the ship. They stop at one of the smaller junk shop dealers, and meet Watto and his nine-year-old slave, Anakin Skywalker.

Although Anakin is very young, he’s already an outstanding pilot, and has built C-3PO, a protocol droid, for his mother. Qui-Gon senses that the force is strong with Anakin, and soon comes to the conclusion that he is the “Chosen One” that’s been prophesied to bring balance to the Force.

Qui-Gon is unable to purchase the parts necessary for the ship since the Republic’s currency is worthless on Tatooine (and because Watto’s a Toydarian and Jedi mind tricks do not work on them), so he bets his ship for the parts needed for the ship in the upcoming Boonta Eve Classic, an annual pod racing event, using a pod racer that Anakin has built.

Anakin will pilot the pod racer, and before the event, Qui-Gon bets that pod racer too in exchange for Anakin’s freedom. Being very greedy, Watto takes that bet too. Anakin manages to win the event; defeating Sebulba, a nasty Dug, in the process. Qui-Gon takes Anakin with him to be trained as a Jedi; leaving Anakin’s mother, Shmi, behind.

As they prepare to leave Tatooine, Darth Sidious’ apprentice, Darth Maul, arrives to kill the Jedi and force Amidala to sign the Trade Federation’s treaty. He and Qui-Gon duel with their light sabers until Obi-Wan has the ship swoop in to rescue Qui-Gon.

They quickly fly back to Coruscant where Queen Amidala pleads her people’s case to the Galactic Senate. There, Qui-Gon also asks the Jedi Council’s permission to train Anakin as a Jedi, but they refuse as they see much fear in him, and they are concerned he could fall to the dark side of the Force.

Back in the Senate chambers, Naboo’s Senator Palpatine convinces Queen Amidala to call for a vote of no confidence in Chancellor Valorum in order to elect a more capable leader. They vote to elect a new Chancellor, but Queen Amidala can not wait for the slow pace of government (and its corruption) while her people suffer. So, Qui-Gon and Obi-Wan accompany her back to Naboo to put an end to the conflict, and to also investigate the sudden reappearance of the Sith which the Jedi believed were extinct.

Once back on Naboo, Padmé reveals herself to the Gungan leader as Queen Amidala, and the two agree to an alliance to win their freedom from the Trade Federation. Elated, Boss Nass promotes Jar Jar to a general in a battle against the Federation’s droid army.

While the two armies fight, Queen Amidala takes a group of her security team to Theed, along with the Jedi, to capture Viceroy Gunray. As a small battle erupts in a hangar housing several N-1 starfighters, Qui-Gon orders Anakin to wait in an empty one.

Darth Maul arrives to attack Qui-Gon and Obi-Wan, and the three prepare to battle. When some Droidekas pin down Padmé and her group, Anakin shoots them from the starfighter, but he accidentally activates the ship’s autopilot in the process. It takes off into space to join the fight against the Trade Federation’s control ship above Naboo.

Out on the battlefield, the tide turns against the Gungans. Once they are in full retreat, the Federation’s droids easily surround and capture them. However, when Anakin’s ship crashes into a hangar on the Federation’s control ship, he manages to shoot one of its reactors, and the entire control ship explodes from the chain reaction as Anakin escapes to safety. The ship’s destruction deactivates the droid army below on Naboo.

Meanwhile, Qui-Gon and Obi-Wan battle Darth Maul. When Obi-Wan becomes separated from them, Maul mortally wounds Qui-Gon. Obi-wan then fights Maul, and cuts him in half at the waist.

He returns to a dying Qui-Gon who asks Obi-Wan to train Anakin. The Galactic Senate elects Palpatine as their new supreme chancellor, and the Naboo arrest Nute Gunray. Yoda promotes Obi-Wan to the rank of Jedi Knight, and then reluctantly agrees to allow Obi-Wan to train Anakin as a Jedi. Padmé presents a gift of thanks to the Gungans during a celebratory parade as we roll to credits.