In Return of the Jedi, Luke Skywalker, Princess Leia, Lando Calrissian, and Chewbacca infiltrate Jabba the Hutt’s palace on Tatooine to free Han Solo from his carbonite prison. Once they accomplish their mission, Luke returns to Master Yoda to complete his training while the others head back to the Rebel Alliance. However, Darth Vader and Emperor Palpatine are busy too. As Palpatine oversees the final stages of construction of the new Death Star, Darth Vader looks to turn his son to the dark side where he and Luke can destroy the Emperor once and for all. This leads to a climatic final battle over and on the moon of Endor for control of the Galaxy. 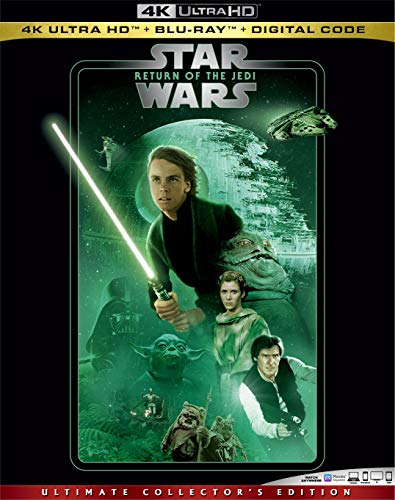 ‘Return of the Jedi’ Movie Summary 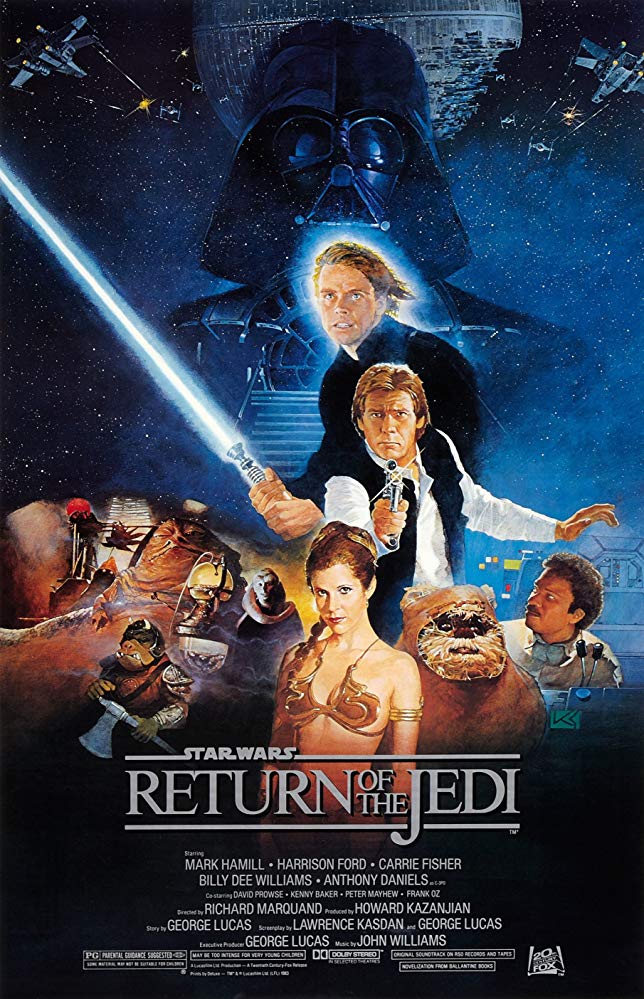 Return of the Jedi begins on the planet Tatooine. Luke Skywalker (Mark Hamill) sends C-3PO (Anthony Daniels) and R2-D2 (Kenny Baker) to the crime lord Jabba the Hutt’s palace as part of a plan to free Han Solo (Harrison Ford) from Jabba’s carbonite prison. Luke offers him the droids as a token of goodwill.

Princess Leia (Carrie Fisher) soon arrives disguised as a bounty hunter to collect the bounty on Chewbacca (Peter Mayhew), whom she has captured. That night, while everyone sleeps, Leia unfreezes Han, but Jabba wakes, and imprisons Han with Chewie, and makes Leia his love slave.

Luke soon arrives, and everything is going to plan. He attempts to negotiate a bargain for his friends, but Jabba trips the trap door Luke stands on which sends him to the rancor below. Luke kills the rancor.

Angry, Jabba orders him, Han, and Chewbacca into the Sarlacc where it will slowly digest them over a thousand years. Luke is the first to be sent in, but as one of the guards is about to push him, Luke springs over him to safety. At the same time, R2-D2 shoots Luke’s lightsaber out from one of his compartments.

Luke lands, catches the lightsaber, and begins taking out Jabba’s guards with the help of Lando Calrissian (Billy Dee Williams) disguised as one of them. As everyone’s distracted, Leia takes the chain that Jabba uses as her leash, and strangles him to death. Boba Fett (Jeremy Bulloch) gets tossed to the Sarlacc for good measure. Then, Jabba’s barge is blown to peaces, and our heroes escape the planet.

The group splits before heading off to the rendezvous

They head off to rendezvous with the Rebel Alliance, but Luke splits from them, and returns to Dagobah where Yoda (Frank Oz) lies on his deathbed. There, Yoda says that Darth Vader (James Earl Jones/David Prowse) was once known as Anakin Skywalker; Luke’s father, but in order for Luke to become a Jedi like his father, he must face Vader one more time. Yoda disappears to become one with the Force, and Obi-Wan’s (Alec Guinness) ghost appears to tell Luke that Leia is his twin sister.

When the Rebel Alliance learns the Emperor (Ian McDiarmid) is personally supervising the construction of a second Death Star, they set out to destroy it. However, an energy shield protects this one so Han leads a small team to the forest moon of Endor to destroy the shield generator there; allowing the Alliance’s fleet to then swoop in, and destroy it.

Luke and Leia are part of the strike team, and they all head to Endor in a stolen Imperial shuttle. Once they land, they meet the locals; a tribe of man-eating Ewoks. The Ewoks trap the team, but Luke uses the force to make them think C-3PO is a golden god, and they release them.

Vader’s on that ship

Luke senses Vader’s presence nearby, and knows now is the time to confront him. Before he leaves, Luke reveals to Leia that she is his sister, Vader is their father, and that he’s off to see pops. Luke sets out to surrender to some Imperial troops, and they in turn take him to Vader. He senses the conflict in his father, and he tries to convince him to return to the light side of the Force, but Vader says it’s too late for him. He must obey his master.

Vader takes Luke to the Death Star where he meets Sheev. Clearly he’s intent on turning Luke to the dark side, and he does his best to make Luke give in to his anger. The Emperor reveals that the Death Star is fully operational, and that the Rebel Fleet will soon fall into his trap. Luke isn’t happy, but still doesn’t fight.

Down on Endor, the Imperial troops capture Han’s and his team, but those blood-thirsty Ewoks counter attack; allowing Han to continue working on taking out that shield generator. As this is going on, Lando Calrissian arrives with the Rebel Fleet in the Millennium Falcon. He quickly learns the Death Star’s shield is still active, and finds the Imperial fleet waiting for them. Admiral Ackbar (Tim Rose) reveals it’s a trap, and they engage the Imperial fleet instead of taking their chances with the Death Star

The Emperor continues to push Luke’s buttons, and eventually Luke grabs his lightsaber, and attempts to strike the Emperor down. Vader blocks him, and the two duel to the death. Luke has trouble suppressing his feelings which allows Vader to sense that Luke has a sister. He threatens to turn her to the dark side instead.

This fires Luke up, and he cuts off Vader’s bionic hand. The Emperor gleefully pushes Luke to kill Vader, and take his place. However, Luke calms himself, and refuses to give in; declaring himself a Jedi like his father.

The Emperor doesn’t like that answer, and uses Force lightning to kill him. However, not willing to see his son fall like him, Vader grabs the Emperor, and throws him into the Death Stars reactor below—killing him forever never to be seen in any sequel—we’re certain of that. Unfortunately, the Emperor’s lightning mortally fries him and his life support. Vader’s dying wish is to look at Luke through his own eyes. Luke removes his mask, and the now redeemed Anakin (Sebastian Shaw) dies in Luke’s arms.

By now, Han’s team is able to destroy the shield generator. Lando punches it deep into the Death Star’s core, and destroys its main reactor. That sets off a chain reaction that blows up the whole thing from the inside. As the Falcon flies out of it at the last second, Luke escapes on his own in a shuttle with his father’s body. The second Death Star goes boom.

Down on Endor, Leia senses that Luke survived the blast, and then reveals to Han that Luke is her brother. Han is delighted, and thinks maybe, just maybe, the two of them can one day have a great kid like Luke who make one fine Jedi!

Luke quietly lands on Endor where he cremates Anakin’s body on a pyre. As word of the Emperor’s death spreads, celebrations begin all over the Empire. Luke sees the Force Ghosts of Yoda, Obi-Wan, and now Anakin (Hayden Christensen) watching over him as the film comes to a close.