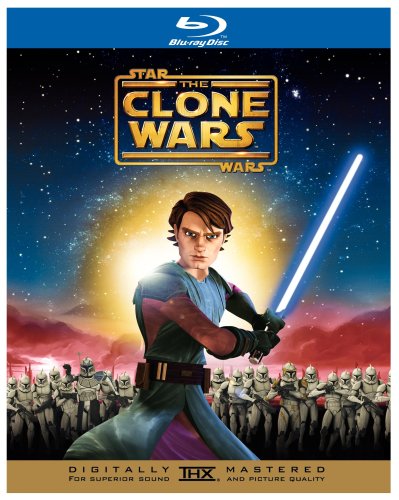 The Clone Wars animated film begins on the planet Christophsis with Jedi Knights Anakin Skywalker and Obi-Wan Kenobi leading a number of squadrons of the Republic’s clone army against the Separatist’s droid army there. When Republic reinforcements arrive, so does a youngling named Ahsoka Tano. Master Yoda has assigned her as Anakin’s Padawan.

Anakin is annoyed about the appointment as the padawan will slow him down. However, when she successfully helps Anakin deactivate the Separatists’ shield generator; allowing Obi-Wan and his clones to take out the Separatist army, Anakin learns she’s a capable Jedi, and agrees to train her.

Yoda arrives with reinforcements, and with the battle now in hand, he tasks Obi-Wan, Anakin, and Ahsoka to find the crime lord Jabba the Hutt’s son Rotta who has mysteriously vanished. Obi-Wan is to go to Tatooine to negotiate a treaty between the Hutts and the Republic so that any travel through the Outer Rim portion the Hutt controls will be without their interference in exchange for bringing Rotta back safe.

Anakin and Ahsoka set out to the planet Teth where Clone Scouts have spotted the child being held atop one of the tall monasteries there. The two Jedi head out with a squadron of clone troopers, but Count Dooku’s apprentice Asajj Ventress, and another small army of Droids, attacks them as they land on the planet.

Anakin figures that Dooku plans to frame the Jedi for kidnapping Rotta to win Jabba’s favor in negotiating safe passage through their space. After a large battle, Anakin and Ahsoka find Rotta, but he’s very ill. They escape Ventress’ trap along with R2-D2 aboard a broken down piece of junk, and head back to Tatooine. Obi-Wan, already on his way to Teth, arrives with a squadron of clone troopers of his own to save the remaining troops there. He and Ventress duel, and as Obi-Wan is about to finish her off, she escapes.

Back on Coruscant, Padmé Amidala, Naboo’s Senator, and Anakin’s secret wife, learns of Anakin’s mission and fears for his safety. She contacts Jabba’s uncle Ziro who runs a racket on Coruscant. Ziro thinks the Jedi are responsible for Rotta’s disappearance (as Dooku has by now convinced all the Hutt that the Jedi are plotting to kill them all). He refuses to help Padme negotiate with Jabba.

Later, while spying on Ziro, Padmé discovers that Ziro has conspired with Dooku to have Rotta killed. This will result in Jabba killing Anakin in retaliation, and which will in turn will force the Jedi counsel to arrest Jabba; thus allowing Ziro to rule the Hutt clans. One of Ziro’s minions discovers Padmé, and they lock her up. However, she fools some droids into activating her comlink which calls C-3PO. Fearing for her safety, C-3PO sends a squadron of clone troopers to find her. When they arrive, they save Padmé, and arrest Ziro.

As Anakin and Ahsoka arrive to Tatooine, MagnaGuards shoot his crippled ship out orbit. They crash lans outside of Jabba’s Palace, and head towards it. When Anakin senses Dooku’s presence, he has Ahsoka take Rotta to Jabba’s palace while he holds off the Sith Lord.

Some MagnaGuards ambush Ashoka, but she eventually defeats them, and heads to the palace. Meanwhile, Dooku may or may not have let Anakin win their duel so that Anakin can return to the palace too. The two Jedi return Rotta safety to Jabba, but Jabba still orders their execution for the kidnapping of his boy.

At the same time, Padmé contacts Jabba, and tells him that Ziro and the Separatists’ are actually responsible for the kidnapping. Jabba then agrees to the Republic’s treaty, and he releases Anakin and Ahsoka to Obi-Wan and Yoda’s custody.

Meanwhile, Dooku reports in to Darth Sidious to tell him their plan failed, but the Sith Lord assures him that everything is going as planned.