In The Last Jedi, General Leia Organa’s Resistance forces to flee D’Qar as the First Order fleet arrives. Poe Dameron leads a counterattack which destroys a First Order dreadnought, but is costly in Resistance lives. They manage to jump to hyperspace, but the First Order tracks them down and attacks. Kylo Ren, hesitates to fire on the lead Resistance ship after sensing his mother’s presence, but his wing-men destroy the bridge anyhow.

Most of the Resistance leaders die and Leia is launched into space. With the force as her ally, she survives. Poe disapproves of their new leader, Vice Admiral Holdo’s passive strategy. He heads out to help Finn, BB-8, and mechanic Rose Tico on a secret mission to disable the First Order’s tracking device. Unfortunately for Snoke, everything is not proceeding as he’s foreseen it. 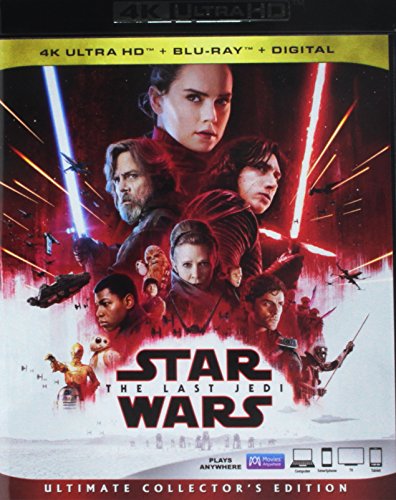 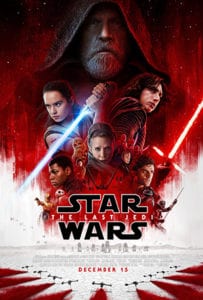 Kylo Ren holds his fire on the Resistance’s ship; sensing his mother’s presence onboard. However, TIE fighters manage to destroy the bridge killing Admiral Ackbar, and knocking out Leia.

Poe dislikes Vice Admiral Holdo, so he sets out on a side adventure to disable the tracking device on the lead ship with Finn, BB-8, and Rose Tico.

As this encounter goes on, Rey lands on Ahch-To with Chewbacca and R2-D2 where Luke Skywalker lives in a self-imposed exile. Luke refuses to help Rey, and wants the Jedi Order to end.

As Rey and Kylo chat with each other through the Force, R2-D2 persuades Luke to train Rey. Kylo tells Rey that Luke tried to kill him, so he went to the dark side of the Force. Luke mentions that he thought about it.

Rey knows Kylo is redeemable, so she leaves Luke to his solitude. As Luke prepares to burn down the Jedi temple on Ahch-To, Yoda’s ghost appears and does it for him. He then encourages Luke, yet again, to learn from his failure.

Meanwhile, back in space, Holdo plans to evacuate the Resistance via small transports. Poe pouts, and leads a mutiny. Finn, Rose, and BB-8 are still on a side adventure, and travel to the Canto Bight casino. There, the hacker DJ says he can help them disable the tracking device.

They manage to get on Snoke’s ship, but Captain Phasma captures all of them except BB-8. Rey shows up to save the day, and Kylo catches her, and brings her to Snoke.

Snoke says he’s the real reason she and Kylo can talk to each other through the Force as part of a plan to destroy Luke. He orders Kylo to kill Rey, but Kylo kills Snoke instead. Rey believes Kylo’s actions have turned him back to the light side of the Force, but instead, Kylo asks Rey to rule the galaxy with him and his black heart.

They Force fight for possession of Anakin Skywalker’s lightsaber, but it breaks in to two.

Finally, Leia recovers from her space walk, and she stuns Poe by allowing the evacuation of the ship. Holdo remains on board to hold off Snoke’s fleet.

DJ tells the First Order of the Resistance’s plan which leads to the destruction of the escape transports. Holdo rams her ship into Snoke’s fleet at lightspeed, and destroys everything. Rey escapes in the chaos, and Kylo declares himself Supreme Leader.

BB-8 frees Finn and Rose once they take out Phasma, and they all then head to Crait. The First Order arrives, and Poe, Finn, and Rose attack using old speeders. Rey and Chewbacca take on TIE fighters in the Falcon to draw their fire away from the Resistance.

Rose talks Finn out of kamikazing the enemy siege cannon that penetrates the Resistance’s fortress. Luke suddenly appears, and takes on the First Order to give the surviving Resistance members time to escape. Their return fire on Luke has no effect. Kylo then takes on Luke mano a mano in a lightsaber duel. When Kylo swings at Luke, he realizes Luke duped him, and that he’s been fighting a Force projection. DUH!

While Rey and the Force helps the Resistance escape on the Millenium Falcon. Luke becomes one with the Force back on Ahch-To. Rey and Leia sense his death.

Leia and the surviving Resistance members will return from their losses. Back at Canto Bight, a children that helped Finn and Rose escape grabs a broom with the Force and gazes into space as our new hope.