In Strange Brew, something is rotten at the Elsinore Brewery. Bob and Doug Mackenzie help the daughter of the brewery founder, Pam, regain control of it after her father mysteriously dies. However, they must first go through a sinister brew master and two teams of vicious hockey players under his control. 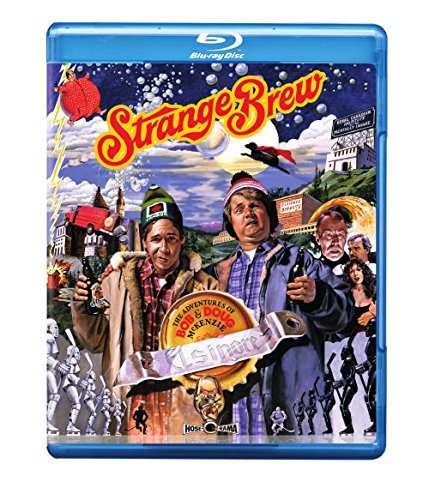 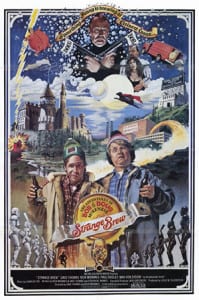 Thus we hosers are introduced to the crazy, irreverent, nasty, hilarious humor of our favorite Canadian beer bros, Bob & Doug McKenzie (played by comedy geniuses Rick Moranis & Dave Thomas), ay? These two lunatics put on their beer goggles and take us on a no-holds-barred version of life in The Great White North – or at least their version of the good life with jelly donuts, stocking hats, giant parkas and, of course, kegs and kegs of beer – hangovers be damned.

In the opening, we are introduced to the McKenzie brothers introducing US to the movie we’re about to watch. But, as with all McKenzie Bros. ideas, this one blows up in their drunken faces in front of the live audience. So the boys unleash the 11th Egyptian plague on the theater – thousands of moths flying toward the projector’s bright white light. The theater audience revolts and Bob & Doug are unceremoniously chased out of the theater from the angry moviegoers looking to wring their movie money out of the brothers’ beer-pickled hides.

Unfortunately, when the boys get home, they realize Bob spent all of their dad’s beer money making their “blockbuster”. With only a couple bottles of beer left, which they quickly drink themselves and feed their superdog, HoseHound, they are chased out of the house by the otherworldly voice of Bugs Bunny, er, Mr. McKenzie and the boys have to figure out various (re: “stupid”) ways to make money to buy more booze. So Doug hatches a plan to put a mouse in a beer bottle to try to blackmail Elsinore Beer into giving them more beer for free.

When the McKenzies drive their van to the entrance of Elsinore Beer, which sits precariously close to the local psychiatric ward-from-hell, they come across a young lady trapped in her car as an electric fence threatens to shock her and give her an instant afro for her wake.

The boys crash the van into the car, freeing the lady, who turns out to be the daughter of the deceased owner, Pam Elsinore. So Pam cheerfully offers our two heroes jobs, which they promptly screw up because, well, they’re the McKenzie Brothers.

The maniacal brewmeister of the factory, Brewmeister Smith, doesn’t like the new hires because they could destroy his ingenious plans to take over the world by drugging the precious, golden glow of beer and playing awful organ music that not only makes innocent people become slaves to the dastardly brewmeister, but also makes grown men put on hockey gear and pummel each other with hockey sticks at the drop of a C-minor!

There’s a whole helluva lot I’m not including here, but suffice to say, the McKenzies will get their jelly donuts, drink A LOT of beer and do their best to monkey wrench a plan they don’t know exists in the first place. Will the McKenzie Brothers be able to foil the air-tight plan to get the entire world drunk to bow to the Brewmeister, without steamrolling each other into oblivion?

Will Pam ever get control of her brewery and find true love with someone not having puke breath? Will HoseHound find ways to fly through the air eat hot dogs and drink golden brews at the Oktoberfest? Will Bob have to drink a vat of beer by himself to put out a fire that threatens the very existence of Elsinore beer???

Tune in to Strange Brew to find out, hosers. Ay?