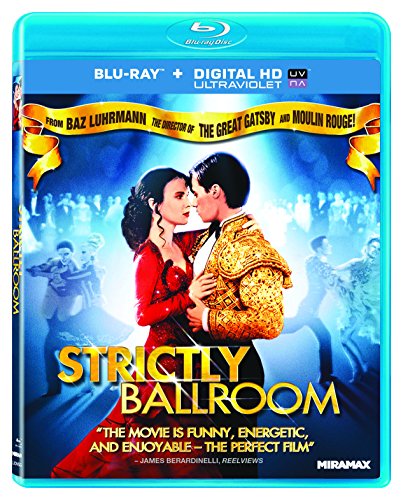 Lionsgate Films has announced and detailed its upcoming Blu-ray release of Strictly Ballroom this April. The film is directed by Australian director Baz Luhrmann and stars Paul Mercurio, Tara Morice, Bill Hunter, and Pat Thomson.  Strictly Ballroom will be available for purchase online and in stores across the country on April 30th.

The first film directed by Luhrmann, the director of Romeo + Juliet, Moulin Rouge!, and the soon to be released remake of The Great Gatsby, the film is a hilariously funny romantic comedy that will leave you singing, laughing and cheering for more.  Experience the magical story of a championship ballroom dancer who’s breaking all the rules.  A hit with fans and critics all across the globe, Strictly Ballroom will hold you tight and dance straight into your heart.

Strictly Ballroom was released overseas in 1992, but made its U.S. debut in February of 1993.  The film grossed over $11 million at the box office in the U.S. alone.

The Blu-ray release of Strictly Ballroom will include several special features, including: Strictly Ballroom: From Stage To Screen featurette; Samba To Slow Fox Dance featurette; a deleted scene; a design gallery with narration; and an audio commentary with director Luhrmann, production designer Catherine Martin, and choreographer John “Cha Cha” O’Connell.

Disclaimer: Affiliate links are contained in this post. This means when you click a link, and purchase an item, Movie House Memories will receive an affiliate commission. Advertisers and Affiliate Partnerships do not influence our content. See our Terms of Use about the inclusion of affiliate links on this site for more information.
February 9, 2013
1 minute read
Show More
Back to top button
Close
Close