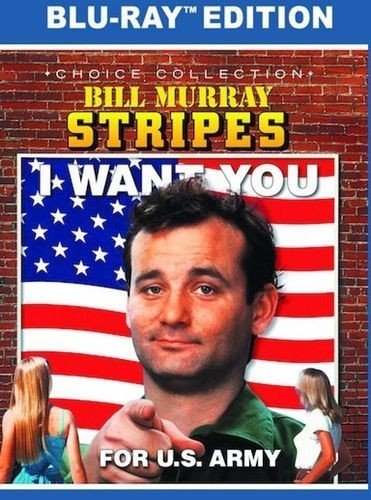 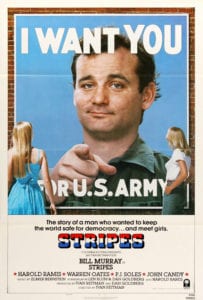 The genius of Stripes is that it stars some Hollywood comedic heavyweights at the top of their game. You can tell that much of the dialgoue is ad-libbed, and like the classic golf-themed Caddyshack of the prior year, Stripes contains numerous quotable, classic lines. That’s not to say that Stripes is on par with the Quotable Caddyshack – just that Bill Murray learned that people like him so he needs to ham it up.

The movie was originally designed to be a Cheech and Chong vehicle, and some of the stoner humor finds its way into the new version. But Stripes is, in essence, a movie about Bill Murray, Harold Ramis, and John Candy in the army. They took funny men from Saturday Night Live and SCTV, turned on the cameras, and said “Go!”

The plot of the movie is certainly not its strong suit. Murray plays John Winger, a New York cabbie whose life is not going as he wants it to. Depressed at losing his job, his car, and his scantily clad too-hot-for-Bill-Murray girlfriend all in the same day, he and his buddy, Russell Ziskey, enlist in the Army because they feel like they really don’t have any other options.

Once training starts, Murray is his same wise-ass self, but he soon learns that smarting off to your superior officer results in push-ups in the rain, not belly aching laughs. Throughout training, Murray is constantly butting heads with his drill sergeant Hulka, the “big toe” of the unit. Hulka does not appreciate Winger’s humorous view of life in the army, and the two even square off in fistacuffs in the mens room.

The unit’s commanding officer is played by a pre-Night Court John Laroquette, an incompetent buffoon who likely got his position of authority either because his dad was a higher up or because he married well. Regardless, Laroquette’s antics yield some classic moments, like when he is playing with his army toys or caught spying on the women’s shower, wishing he could be a loofa.

As training continues, Hulka eventually gets injured when Timothy Busfield (in his first movie role) launches a mortar round that takes out the look-out tower Hulka just climbed. Without a leader, the unit decides they need a night out at the local mud-wrestling bar. There, John Candy’s Dewey “Ox” Oxberger becomes the lean, mean, fighting machine he joined the army to become. He hops in the ring, ultimately battling five scantily clad women in a almost-no-holds-barred slugfest.

Without much explanation, the Miltary Police arrive and haul the soldiers back to base. Winger and Ziskey luck out, however, and are led away by two hot MPs who are apparently too sexy for battle. The sexy MPs try take Winger and Ziskey back to the barracks, but unpredictable Winger rushes into the General’s house after learning that he is out of town until the next day. Winger and Ziskey get it on like donkey kong with the MPs at the General’s place, eventually finding their way back to the barracks, where their unit is depressed and downtrodden, having discovered that their ineptitude (and lack of Hulka’s big toe leadership) will prevent them from graduating the next day.

Winger rallies the troops, and they spend the night prepping and training for their graduation day exercises. Unfortunately, the night of practice leaves them tired and weary, and they oversleep, practically missing the entire ceremony. They rush in, marching in formation, and explain that they were late because they were in “training, sir.” What kind of training? “Aaaaaarrrmy training sir.” They proceed to razzle-dazzle the top brass, and the General is so impressed that he selects Winger and the band of misfits to help display the Army’s new EM-50 Urban Assault Vehcile (which is essentially a bad-ass RV) in Italy.

The troops clean up and travel to Italy where Winger and Ziskey finds themselves bored to tears babysitting the RV in an empty hangar. They decide to “borrow” the EM-50 and visit their MP girlfriends up in Germany. When Laroquette shows up at the hangar to screw some dumb bimbo in the bad-ass RV, he discovers that the EM-50 is gone. Fearing that his ineptitude will finally catch up to him and get him shipped off to the Arctic Circle, he decides to take the unit up to Germany to retrieve the EM-50 without telling anyone of the disappearance.

Due to crappy weather, bad signs, and a wrong turn, the Laroquette-led troops wind up behind the Iron Curtain in Czechoslovakia, where they are captured by red commie bastards. Winger, Ziskey, and the sexy MPs hear a radio transmission from Hulka, who escaped before the capture, and realize that the unit came looking for them before getting trapped behind enemy lines. The four make their way across the border, sneaking past another SCTV alum, Joe Flaherty, into Czechoslovakia.

The ease with which they entered (and eventually exited the country) confirmed Murray’s comment: “It’s Czechoslovakia. It’s not Moscow. It’s like going to Wisconsin.” After making their way to the base, the four put the bad ass RV to the test, taking out tanks and birds-nest gun ports. They eventually save the troops, defeat the Commies, and escape back across the border into Germany. Upon returning to the US, they are greeted as heroes, with each of them getting their own magazine cover, various awards, accolades, fame, fortune, and some serious sex.