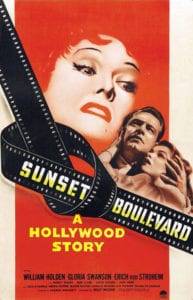 While William Holden, Gloria Swanson, Erich von Stroheim, and Nancy Olson are the featured players in the movie, who all earned their Academy Award nominations, look for some great cameos from Cecil B. DeMille, Hedda Hopper, Buster Keaton, H. B. Warner and Anna Q. Nilsson.

Norma Desmond is an aging silent film queen who refuses to accept that the world has forgotten her. She hires a down-on-his-luck screenwriter named Joe Gillis to help write a movie to restart her dead career. While Joe believes he can manipulate her to his benefit, but he soon finds out he’s dead wrong. Joe’s conflicting feelings towards their awkward relationship and Norma’s diminishing grasp on reality leads a grim death.

Read the full summary, and add it to your collection today!

Gloria Swanson steals the show in this film. How she didn’t win an academy award for her performance baffles me. Not only was her performance better than Judy Holliday’s in Born Yesterday, but it’s one of the all-time great performances by any actor/actress.

Erich von Stroheim’s portrayal as Desmond’s dutiful and proud butler, and William Holden’s Joe Gillis are also Oscar-worthy performances, but this film’s greatness comes from Gloria Swanson. I enjoyed Buster Keaton’s card-playing cameo too, but it was too brief for me.

Franz Waxman scored this one; basing Norma Desmond’s theme on tango music, and Joe’s on bebop music of the late 1940s. It’s a nice contrast between old-world class and youthful innocence of the day. As Norma lost touch with reality throughout the film, Waxman made the music surrounding her crazier, but not to the point it overtook the story. It simply complimented the dark nature the film took.

Sunset Boulevard is another in a long line of wonderful noir films with a story that is compelling and stands the test of time. This is a film that could be remade and be just as relevant today as it was nearly 70 years ago, and that is why this film is MHM’s June pick for the 12 Retro Movies Everyone Should See In 2017.