After a power source for the community of Krypton survivors is accidentally whisked to earth, Kara-El, cousin to Superman and niece to Jor-El, chooses to go to earth to find it, and bring it back.

Upon her arrival, she becomes just a powerful as her cousin, but encounters dangerous battles and unexpected obstacles when a mean-spirited woman who practices rituals of the occult takes the power source for herself, and uses it to cause destruction and attempt zenith human status. (Courtesy of Warner Bros.) 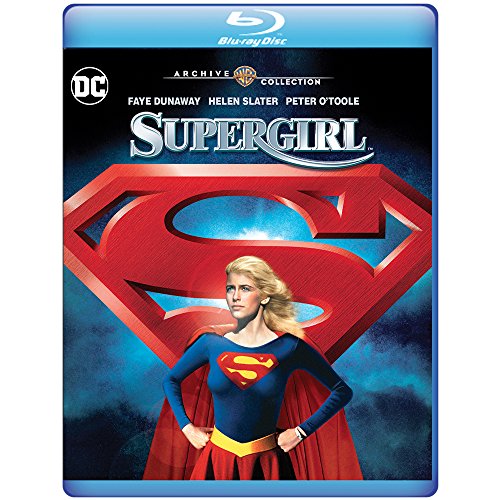 Kara Zor-El (Helen Slater) lives in Argo City which is located in a pocket of trans-dimensional space called the Survival Zone after Krypton’s destruction. She is Kal-El/Superman’s (Christopher Reeve) cousin and Jor-El’s (Simon Ward) niece.

Also in the city is a local artist named Zaltar (Peter O’Toole). He shows Kara an Omegahedron he “borrowed” from the city without their knowledge. While the Omegahedron powers the entire city, it also allows people who have it in their possession to create whatever comes to mind—good or bad. When Zaltar hands it to Kara, she uses it to bring to life a dragonfly she created. However, it flies through a panel on the wall that keeps the city pressurized. In the chaos that ensues, the Omegahedron gets sucked out into the nothingness of space.

With it gone, the city will be without power in a matter of days and all the citizens will soon die thereafter. The city elders banish Zaltar to the Phantom Zone as Kara decides to follow the Omegahedron to Earth and bring it back. During her journey, Kara undergoes a transformation like her cousin. She dawns the blue and red suit to become SUPERGIRL!

The Omegahedron lands on the shores of an Illinois lake on Earth where a power-hungry, wanna-be witch named Selena (Faye Dunaway) is on a date with a warlock named Nigel (Peter Cook). Selena’s grown impatient with Nigel and she grabs the Omegahedron; not realizing what exactly it is. She does quickly realize, however, the Omegahedron is powerful enough to give her real magic. She places it in a lead box until she can figure out what to do with the new trinket.

Supergirl next arrives on Earth only to realize she has new powers thanks to our sun’s radiation. She doesn’t know exactly where the Omegahedron is located, but a bracelet on her wrist glows when it’s nearby. She creates an alter-ego named Linda Lee—the cousin of Clark Kent—and enrolls at an all-girls school in Midvale, Illinois. There, she becomes roommates with Lucy Lane (Maureen Teefy), the younger sister of Lois Lane. Once there, she becomes smitten with a local groundskeeper named Ethan (Hart Bochner). Selena also spots him on the school grounds when she’s out for a drive with her assistant, Bianca (Brenda Vaccaro), and decides she wants his body too.

Selena calls the phone number on his truck and invites him to her place under the ruse of hiring him to tend to her landscape. She slips him a love potion that will make him make him fall in love with the first person he sees for either 24 hours or until someone releases a specific spider from a nutshell—whichever happens first. Before he can fall for Selena, he passes out. He regains consciousness when Nigel pays Selena a visit. She and Bianca chat him up at the front door as Ethan wanders out the back and onto the streets of Midvale.

When Selena discovers Ethan missing, she uses her magic mirror on the wall to track him down. She uses her new-found powers to bring a construction vehicle to life and bring Ethan back to her. In the chaos it creates, Supergirl, rescues him from the clutches of the vehicle and then transforms back to her alter-ego, Linda, to make sure he’s okay. This causes Ethan to fall in love with her instead of Selena; even though he’s just see a whole townsfolk worth of people first.

Selena, realizing Supergirl is a threat to her love life, uses the Omegahedron to zap Ethan back to her; knowing Supergirl will soon come looking for him. When Supergirl arrives, Selena traps her in a Phantom Zone Mirror which promptly sends Supergirl to—wait for it—the Phantom Zone.

Now powerless, Supergirl wanders the landscape alone and unsure what to do. Zaltar is there as punishment for his part in the Omegahedron disaster, and he rescues her after she falls in a pool of green sludge and passes out. He then helps Kara to escape the Phantom Zone (which seems more simple than it should be), but he sacrifices himself along the way to do so. As Supergirl emerges from the Phantom Zone, the Sun’s radiation heals her and she regains her superpowers once again.

Back on Earth, Selena continues to use the Omegahedron to take over Earth… with Ethan by her side. Selena’s horrified to watch Supergirl break through her magic mirror on the wall, but she immediately uses the Omegahedron to summon a gigantic shadow demon to destroy the girl.

Just as the demon is about to defeat Supergirl, she hears Zaltar’s voice urging her to fight on. As Supergirl breaks free, Nigel tells her the only way to defeat Selena is to have the demon turn against her. Supergirl flies around her repeatedly to the point it creates this whirlwind/vortex that traps Selena. The demon then attacks her as the whirlwind pulls Bianca in as well. The mirror’s portal sucks all three through it before reforming back to an innocent mirror. Selena, Bianca, and the demon are trapped in the Phantom Zone forever.

Now free from Selena’s spell, Ethan reaffirms his love for Linda, knowing she and Supergirl are one and the same. He also understands Supergirl must leave, possibly forever so that she may save Argo City.

The film comes to a close as Kara returns the Omegahedron to a darkened Argo City, which promptly lights up again.