To make the world safe for nuclear arms merchants, Lex Luthor creates a new being to challenge the Man of Steel: the radiation-charged Nuclear Man. The two foes clash in an explosive extravaganza that sees Superman save the Statue of Liberty, plug a volcanic eruption of Mount Etna and rebuild the demolished Great Wall of China. Your quest for excitement is over! (Courtesy Warner Bros.) 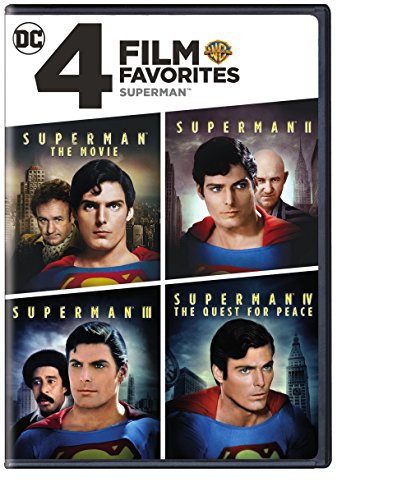 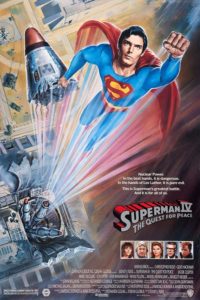 Superman IV: The Quest for Peace begins in space—the final frontier—at a Russian space station. As a cosmonaut works outside it, some space debris hits it which causes the station to spin out of control and hurl the cosmonaut out into space. Superman (Christopher Reeve) swoops in for the save when he first stops the station’s spinning and then saves the cosmonaut.

We next visit Smallville where Superman is in disguise as his alter ego, Clark Kent. Clark is there to visit his adopted Earth family’s farm which is up for sale now that both Kents have passed away. He goes in the barn where his crashed ship is hidden. Clark listens to a message from his Kryptonian mother (Susannah York) that tells him about the green crystal inside it which contains the very last source of Kryptonian energy. She advises him to use it wisely. A realtor named Hornsby (Don Fellows) arrives to tell Clark a big company has made an offer to buy the land, sight unseen. However, Clark refuses to sell it to anyone but an interested farmer.

Once back in Metropolis, Clark goes to catch the subway to work. He spots Lois Lane (Margot Kidder) practicing her French for an upcoming trip, but Clark’s a bit late as usual and misses her train. As he waits on the platform for the next train to arrive, Lois’ train driver has a heart attack. With no one at the controls, the vehicle picks up speed, frightening the passengers. Clark can hear Lois’ screams for help and steps into a nearby phone booth to change into our caped hero.

Superman catches up to the train and passes it so that he may stop it. With the train and passengers now safe, Superman tells the public that the subway is still the safest and most reliable form of transport. He then flies off to work.

Once Clark arrives at the Daily Planet, he learns a media mogul named David Warfield (Sam Wanamaker) and his daughter, Lacy (Mariel Hemmingway), have taken control of the paper. They plan to turn it into a trashy tabloid, and Clark’s speaks his mind against the thought of it. Lacy likes Clark’s earnest nature and she develops a super crush on the man. Lois is also dismayed because Warfield next cancels all scheduled trips, including hers to France. Perry White (Jackie Cooper) storms out of the office in disgust and heads to the bank to beg for money to buy back his newspaper.

In another part of the world, Lex Luthor (Gene Hackman) plots another escape from jail. As he whistles Mozart at the prison’s rock quarry, his nephew, Lenny (Jon Cryer), breaks him out. Now a free man, Lex begins his plan to destroy Superman once and for all.

The two head to a Metropolis museum where an exhibit has a strand of Superman’s hair which supports a 1000 lbs of steel. Once the museum closes, Lex cuts the strand (cuts it way too easily for the tool he has, mind you) and steals it so he can get Superman’s DNA.

We then cut to another unknown part of the world where some middle school kids watch the U.S. President (Robert Beatty) tell America a nuclear arms race is beginning—continuing—it’s hard to say because they don’t show the speech. We have to guess. Anyhow, one of the children in the class named Jeremy (Damien McLawhorn) writes a letter to Superman, asking him do something about the crisis, and he sends it to the Daily Planet.

Once it arrives, Clark reads the letter, and while he would like to help, the Krypton’s elders have forbidden him from intervening in human affairs. Superman asks for their guidance at the Fortress of Solitude, and they suggest he find a new planet where war is obsolete. However, Superman calls Earth his home, and he decides to do something to help. He heads to the UN where he announces he will rid the world of all nuclear weapons. The world leaders seem to be okay with that because they start shooting their missiles into space, allowing Superman to easily collect them and place them in a super-sized net orbiting Earth. Once he has them all, he tosses the net into the sun, destroying the weapons upon impact.

Lex Luthor has a plan though. At his penthouse, he makes a deal with three arms dealers. He will get rid of Superman which will cause various unnamed parties to buy these dealers black market weapons. In return, Lex wants a sizable commission for each sale. As part of his plan to kill Superman, Lex will create a clone of Superman using nothing more than a pile of goop grown from Superman’s stolen hair strand and a computer that figures the rest out for Lex.

Lex impersonates a general at a military base to attach his cloning device, now in a white box, to what seems to be the last remaining nuclear missile in the world. After it launches, Superman catches it in space and hurls it into the sun.

Upon impact, a glowing human embryo pops out of the sun and grows into Nuclear Man (Mark Pillow) with nuclear super powers. He immediately flies to Metropolis and seeks out Lex Luthor. Lex is pleased with his own intelligence at creating such an evil man, but when Nuclear Man tries to assert his dominance over Lex, we learn his fatal flaw—he’s literally powerless when not in contact with direct sunlight. Lex uses that to his advantage too.

The movie then switches gears to a Cary Grant style screwball comedy at Lacy’s apartment after she sets up a double date between her, Clark, Lois and Superman. During this painful scene, Lex saves us all when he sends Superman a message only he can hear. Superman immediately leaves to Lex’s penthouse suite.

As Superman returns the statue, Nuclear Man scratches Superman on the neck with his nuclear nails, critically injuring him. Superman escapes, but loses his cape in the process. Everyone assumes Superman’s dead now except for Lois. She just knows he’s alive. They share that connection, you know.

Meanwhile, that scratch Superman has seems to be infected with something radioactive. It both weakens him and ages him. It forces Superman to use his mom’s green crystal on himself to survive.

While Superman recovers off screen, Lex collects on his deal with his three black market dealers. They give him a sizable commission of their underworld arms deals per their agreement, but Lex has bigger plans. He uses Nuclear Man to intimidate them into giving him control of their racket so he can take all the money. Right after this happens, Nuclear Man sees a picture of Lacy on the front page of the Daily Planet announcing she’s its new Editor in Chief. He gets a little crush on her and goes to meet her.

As he arrives at the Daily Planet, he finds Superman waiting for him. The two fight outside before taking it into the building. Oddly, the lack of direct sunlight in there doesn’t affect Nuclear Man.

Superman manages to shut Nuclear Man in the elevator and knock out the lights, rendering him powerless and unconscious. Superman then flies the elevator into space, placing it on the Moon’s surface. However, the sun rises and its light filters into the elevator (not sure why it didn’t filter into it on the flight over, but never mind that). Rejuvenated, the two battle on the Moon’s surface. The ensuing fight results in Nuclear Man burying Superman and then flying back to Earth to grab Lacy. He then flies her out into space where the lack of air and vacuum of space should have quickly killed her, but she seems fine.

Anyhow, Superman digs himself out of his hole and pushes the Moon in front of the Sun to cause a lunar eclipse. Nuclear Man loses all power and drops Lacy. As she floats helpless in space, Superman grabs her and flies her to safety on Earth before immediately returning to finish Nuclear Man. Superman takes him down to Earth and drops him into a nuclear reactor that conveniently has a door wide open (because everyone leaves reactor doors open from time to time). I assume Nuclear Man is now dead once and for all.

Back at the Daily Planet, Perry White returns and he’s retaken control of the newspaper through a hostile takeover after convincing the banks to give him money to buy the controlling shares. Superman picks up Lex and Lenny in their car on the highway as they try to flee. He drops Lenny off at a boys’ home and Lex back at the same rock quarry prison he escaped earlier in the film.

The film ends with us never finding out what happened to Lacy.