Swamp Thing begins in the swamps of the American south. A research scientist, Dr. Alec Holland, accidentally turns himself into a walking, talking hunk of slime, which is part plant, part swamp and part human. The human side mourns for the loss of his wife but begins to have feelings for a mysterious security engineer who is caught up in the conflict. Swamp Thing must protect her from his arch-nemesis, and fellow scientist, Anton Arcane, who seeks to discover the secret of Holland’s mysterious transformation. 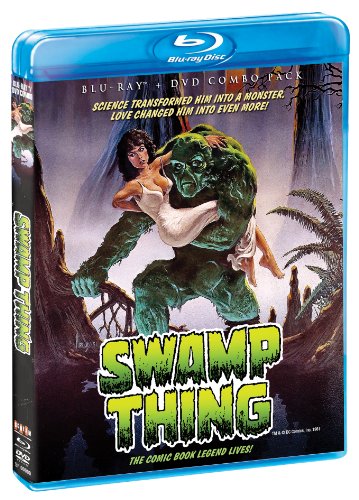 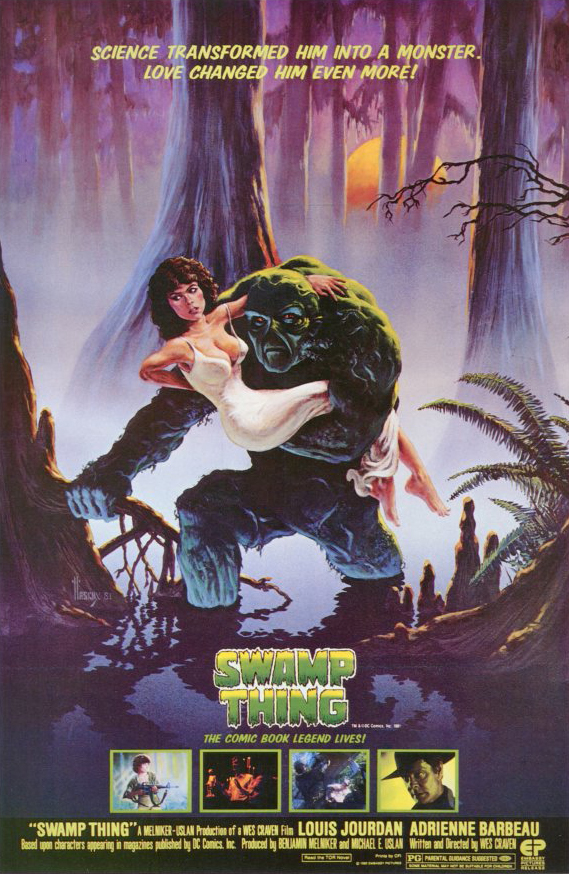 In Swamp Thing, Alice Cable (Adrienne Barbeau) is sent to the swamps of the American south to work as a security engineer at a top-secret bio-engineering project. The project is in the middle of a thick swamp at an abandoned church. She meets the project supervisor, Harry Ritter (Don Knight), who tells her the all the security is to protect the work of one scientist, Dr. Alec Holland (Ray Wise). Dr. Holland, along with his wife Dr. Linda Holland (Nannette Brown) are working on combining plant and animal genomes to create something extraordinary.

Alec Holland gives Cable a tour and encourages her to admire the beauty of the swamp. When they return, Cable is chastised by Ritter for taking the lead scientist out into the swamp without protection. It is revealed that there is rumored threat to the operation from an evil paramilitary leader by the name of Anton Arcane (Louis Jourdan). Alec and Cable return to the lab and find that Linda has made an amazing discovery. A recent plant sample that they have taken off an animal has been made into a formula. Alice shows Alec that when she throws some of the formula onto the floor it causes minor explosions. Sometime later, Alec notices that where the solution was dropped onto the floor that there has been rapid and substantial plant growth. Alec is so excited by the discovery that he kisses Cable in front of his wife. He sends Cable to retrieve Ritter to let him know of their discovery.

Cable does not find Ritter, but she discovers via the security cameras that the camp has been taken over by some mercenary soldiers. She is captured by the soldiers who lead her back to the lab. Ritter arrives at the lab and removes a false mask, revealing himself to be Arcane. Arcane demands the formula and the research notes from Alec. The scientist begrudgingly turns them over. Linda attempts to escape with the research notes, but she is gunned down by Arcane. One of the notebooks lands near Cable, who hides it. Alec gets into a struggle and grabs the beaker with the formula. He falls during the struggle and the formula spills all over him causing him to ignite into a huge fireball. The scientist runs out of the lab and jumps into the swamp to put out the fire. Alec never surfaces.

Arcane orders his men to destroy the lab and remove all of evidence of the team’s work, including disposing of all witnesses. Cable hides the notebook under some debris, but she is captured by Arcane’s men. The mercenaries try to drown her in the swamp, but she is rescued by a giant, green, humanlike creature known as Swamp Thing (Dick Durock). The mercenaries retreat, and Cable escapes into the swamp.

Meanwhile, Arcane realizes that he is missing one of Holland’s notebooks. His men report the sighting of Swamp Thing, and Arcane orders his men to capture the creature alive. Cable makes it to a gas station that is run by a teenage boy named Jude (Reggie Batts). She calls the man who hired her, Charlie (Al Ruban), and reports that the Hollands have been killed and that she has the last notebook. Unfortunately, the phone call has been diverted to Arcane who impersonates Charlie. Arcane and his men go to the gas station, forcing Cable to run off into the swamp again. The mercenaries try to run her down with their vehicle, but she is once again saved by Swamp Thing. The creature returns to the swamp after saving Cable, and Jude takes Cable to a nearby cabin so that she can change clothes. Meanwhile, Arcane notes that the monster shows up to save Cable each time, so he orders his men to capture her in the hopes that it will flush out Swamp Thing.

Later, Cable and Jude take a swamp boat back to the lab so that Cable can retrieve the hidden notebook. Cable sees Swamp Thing trying to work the beakers in the burned-out lab. However, the monster’s hands continually break the delicate instruments. She grabs the notebook and plans to turn it into the government in Washington D.C. Minutes later, Arcane’s men show up in motor boats and begin chasing Cable and Jude’s paddle boat. Swamp Thing once again shows up to save Cable. The mercenaries attack him with boats, grenades, and bullets, but the monster still overpowers them. Cable and Jude make their escape. Cable leaves the notebook with Jude and plans to return to help Swamp Thing. Mere moments later, Cable hears Jude cry out and sees the boy’s lifeless body lying in the paddle boat. The mercenaries capture Cable and take her back to Arcane’s boat.

Swamp Thing finds Jude’s dead body and presses a hand against his head creating a greenish glow. The boy returns to life and is surprised by the monster. However, he realizes that Swamp Thing is a friend of Cable’s and gives him the notebook. On Arcane’s boat, Cable frees herself from one of her captors and jumps into the swamp and swims to shore. Once on shore, she runs into Swamp Thing, who says her name. The mercenary known as Ferret (David Hess) chops off Swamp Thing’s left arm with a machete, but the monster is still able to snap the neck of the mercenary. Cable faints, but when she awakens, she is lying on top of Swamp Thing. The monster offers her an orchid plant and speaks to her for the first time. She realizes that the monster is Alec who has been transformed by the formula and the swamp.

Swamp Thing looks through the notebook while Cable bathes in the swamp. The monster throws the notebook away, but it is retrieved by Arcane and his men who show up and capture both Cable and Swamp Thing. Arcane takes them back to his home in the swamp. He chains Swamp Thing to a wall in the dungeon and ties Cable up for his celebratory banquet. At the banquet, he gives another mercenary, Bruno (Nicholas Worth), the formula in his drink. Bruno convulses but ultimately turns into small little monster with pointed ears and a misshapen head. Arcane locks Cable and Bruno in the dungeon with Swamp Thing. He demands to know why the formula did not work on Bruno and Swamp Thing reveals that the formula does not produce strength but amplifies a person’s natural qualities.

Arcane returns to his study and drinks the formula himself. He transforms into a hairy boar like creature. He grabs a sword and heads for the dungeons. Meanwhile, Swamp Thing regrows his arm by reaching for the sunlight that is coming in through the dungeon window. With both arms, he frees himself, Cable, and Bruno. Bruno directs them to an underwater tunnel that leads them back to the swamp. Arcane follows.

Once back in the swamp, Swamp Thing and Arcane battle. During the battle, Cable is stabbed in the chest and hovers near death. Swamp Thing kills Arcane, and then uses his leafy body and green glow to heal Cable. Swamp Thing turns to leave, and Cable pleads with him to stay and finish his work. The creature refuses but promises to return someday. Jude finds Cable and the two watch as the Swamp Thing returns to the deep dark recesses of the swamp.

User Rating: Be the first one !
May 10, 2012
6 minutes read
Show More
Back to top button
Close
Close