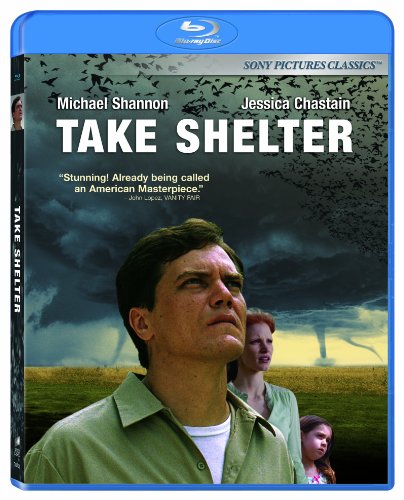 The summary below contains spoilers.
In 2011’s Take Shelter, Curtis LaForche is a is a blue-collar family man from LaGrange Ohio. He and his wife are saving for an operation to have their daughter’s hearing restored when Curtis begins to have vivid dreams and hallucinations of natural disasters, social turmoil, and danger with his family and pet dog. He sees a unique storm, with rain like motor oil, and tornadoes spinning outward from a large center.

Curtis acts on the experiences he has. When he dreams his dog attacks him, Curtis ties the dog to a stake in his backyard. Curtis channels his anxieties over his dreams of the natural disasters into an effort to build a storm shelter in his backyard, straining his family’s limited funds.

Curtis begins to see a counselor at a free clinic even as his behavior becomes increasingly problematic for him and his family. He also pays a visit to his mother, who lives in a mental institution and suffers from paranoid schizophrenia. In order to expand his small backyard storm shelter into a more proper bunker, Curtis takes out a second mortgage without telling his wife.

He also enlists the help of his friend from work, Dewart, to use a company backhoe to dig a pit for his expanded bunker. When their boss discovers the misuse of the company equipment, he fires Curtis and places Dewart on two weeks unpaid leave.

Curtis’ wife, Sam, is furious that Curtis lost his job at a time when their medical benefits were sorely needed and persuades him to see a psychiatrist. The two of them attend a gathering at the local Lion’s Club. Dewart accosts Curtis and punches him. Curtis responds with an out of control rant to the whole meeting about the impending natural disaster, for which none of them are prepared.

This further alienates Curtis from their small town. Shortly after this, the town’s tornado sires go off, and the family huddles down in their shelter. Time passes, and nobody can tell the weather from within the bunker. Sam insists that the storm has subsided, but Curtis claims he can hear the storm raging and refuses to let Sam open the bunker, insisting that life as they knew it had ceased outside the bunker.

Finally, they open the bunker to find a sunny day with people cleaning up after a storm that was little more than an inconvenience. Curtis sees the psychiatrist, who advises them to take a family vacation. They head to the beach, where it seems the relaxation has finally helped Curtis to move on somewhat.

As Curtis plays in the sand with their daughter, she signs the word “storm” to him. Sam walks to the porch, where rain like oil falls and a thick storm approaches from the water with tornadoes streaking out beneath as the tide rips back from the shore and a high wave rushes at the shore.