Based on the comic book character originally released in Deadline magazine during the 1980’s, Tank Girl tells the story of Rebecca Buck, a free-living woman who exists on an Earth that has been devastated by a comet strike. After her friends are killed or captured, Rebecca finds herself tortured by Kesslee, the evil leader of the planet’s most powerful corporation, Water and Power. Soon after, Rebecca escapes captivity with the assistance of a woman named Jet Girl. During the escape, Rebecca steals a tank, which not only assists her in her adventures, but causes her to become legendary. 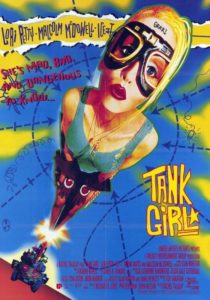 In the distant future of 2033, the Earth has been decimated by a comet striking the planet. The world is essentially devoid of water after a decade long global drought, which makes water the most precious item on the Earth. Kesslee (Malcolm McDowell) controls the powerful Water & Power (W&P) Corporation that strives to obtain all the water on the world by any means necessary, including by violence. However, W&P’s efforts are constantly being thwarted by an unknown group of marauders known as the Rippers.

Rebecca Buck (Lori Petty) is an extrovert woman who lives in a commune in the Australian outback with her boyfriend Richard (Brian Wimmer) and a young girl named Sam (Stacy Linn Ramsower). The commune possesses the last water well in Australia not controlled by W&P. One night, the commune is attacked by W&P foot soldiers while Rebecca is on guard duty. Rebecca escapes being raped by one of the foot soldiers (Richard Schiff) and runs back to the house to save her friends. She arrives just in time to see Richard killed and Sam captured. The solider capture Rebecca as well and take her and Sam back to the W&P headquarters.

Kesslee sees a use for Rebecca and begins to torture her in the hopes that she will agree to cooperate with the W&P’s demands. Jet Girl (Naomi Watts) is a jet mechanic who works for W&P repairing their air vehicles. Jet Girl dreams of escaping W&P but has given up on the dream until Rebecca arrives. Jet Girl tries to convince Rebecca to give into her captors, but the head strong Rebecca refuses. Kesslee continues to torture her in the hopes that she will assist him in locating the Rippers who are hidden in the wasteland. The torture includes sliding Rebecca down into a long pipe until she becomes stuck with the intention of inducing claustrophobia. However, Kesslee’s dastardly attempts to force Rebecca to bend to his will are unsuccessful, and Rebecca remains openly defiant.

Not long after, the mysterious Rippers slaughter guards at the W&P compound but manage to escape before Kesslee and his men can catch them. Kesslee uses Tank Girl as bait to lure the Rippers into the open, but the mysterious marauders avoid capture and seriously wound Kesslee. During the battle, Rebecca and Jet Girl manage to escape with Jet Girl stealing a W&P jet and Rebecca stealing a tank. Rebecca proceeds to go by the name, Tank Girl, and massively upgrades her tank. The two women encounter the eccentric Sub Girl (Ann Cusack) and learn that Sam is working at a sex club called Liquid Silver. Jet and Tank Girl infiltrate the club, and Tank Girl manages to save Sam from Rat Face (Iggy Pop), a mutant pedophile. Tank Girl humiliates the club’s high-end owner, the Madame (Ann Magnuson), by making her sing Cole Porter’s “Let’s Do It”.

The Madame’s performance is interrupted by W&P troops who recapture Sam. Tank Girl and Jet Girl wander the desert looking for the Rippers’ hideout, hoping that they will help them. Eventually they discover a group of human/kangaroo hybrid men who identify themselves as Rippers. Tank Girl learns that the Rippers were created by a man called Johnny Prophet. Tank Girl befriends one Ripper by the name of Booga (Jeff Kober) while Jet Girl takes interest in a Ripper named Donner (Scott Coffey).

User Rating: Be the first one !
May 18, 2022
3 minutes read
Show More
Back to top button
Close
Close