Tarzan the Ape Man tells this jungle story from Jane’s point of view. When she visits her father in Africa, she forces him to agree to let her joins his expedition. After a sexy bath, and some close encounters, Tarzan makes his move on Jane, and the two form a sexual bond. However, when the expedition encounters local savages, Tarzan must come to their rescue if anyone hopes to survive! 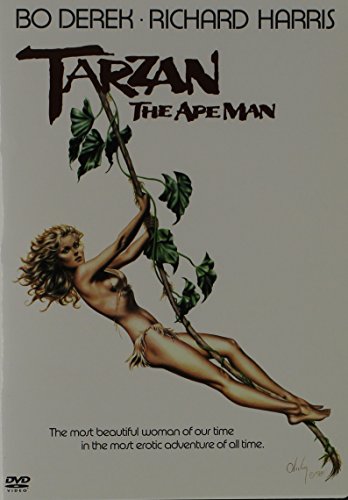 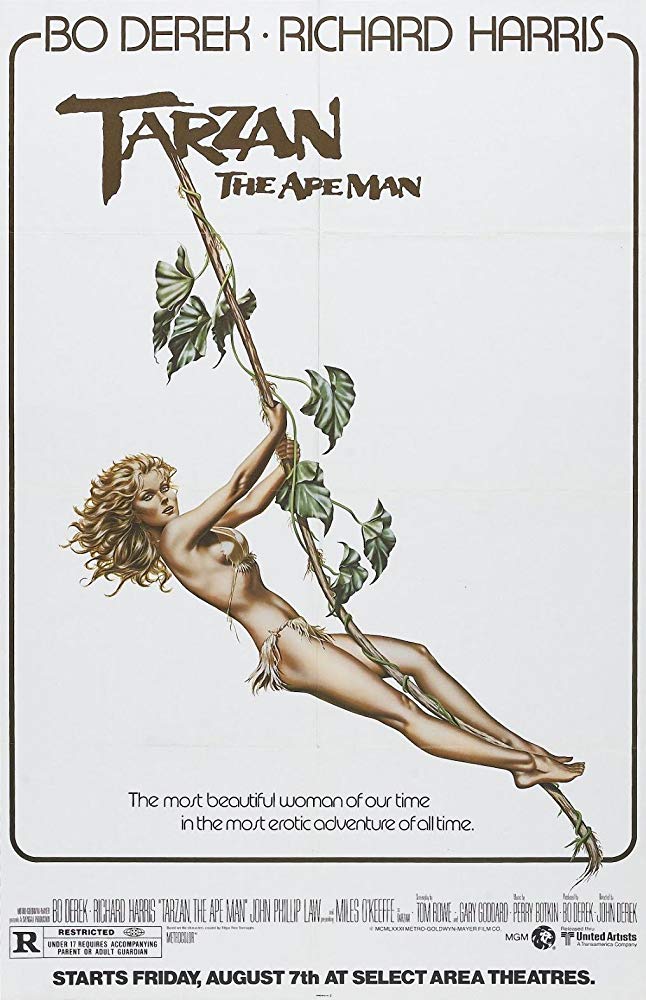 In Tarzan the Ape Man, Jane Parker (Bo Derek) travels to West Africa in 1910 hoping to find her adventure-seeking father, James Parker (Richard Harris), whom she has never known. Once there, she sets out on a small boat to find his camp, but when the crew gets drunk, and accost her, she’s forced to take a supply boat for the remainder of the trip.

Jane arrives at her father’s camp where he is amazed at how much she looks like her mother, Elizabeth. Harry Holt (John Phillip Law) is Parker’ expedition photographer, and he would like Jane to use his tent he’s pitched for her. Holt then introduces Jane to a native woman named Africa (Akushula Selayah)—Parker’s local mistress.

At dinner that night, Jane tells Parker that her mother recently died, and she inherited her fortune. While she barely knows her father (only from what she read in the newspapers), she hates him for leaving her as a baby. Parker though insists he’s always loved them, and still carries a photo of the two of them.

The next morning, Jane decides she’s going to help her dad search for THE LEGENDARY ELEPHANT GRAVEYARD!!! Parker objects, but Jane has the money, so he gives her a gun, and off they go into the jungle…where they’ve got fun and games.

The team approaches a large mountain, and sets up shop for the night. Parker tells the team that Jane will return to base camp in the morning to report on the expedition’s progress. From beyond the trees, a voice loudly bellows echoes out. Parker claims the voice is from the legendary half man/ half ape known as Tarzan (Miles O’Keeffe).

The native guides are scared of Tarzan’s yell, and want to leave, but Parker offers them more money to stay. Tarzan calls out again, and Parker resorts to using Africa to shame the other men into continuing on with him.

When they wake the next morning, Jane decides she’s going to scale the large mountain with the other members of the expedition instead of returning to camp. Each person scales the mountain’s face with only a thin rope for support. As they reach the top, the last member’s rope snaps, and he falls to his death like Wile E Coyote down a cliff.

Parker shows Jane a map he found/borrowed/stole from a Cairo museum. It shows a secret route an expedition took 1000 years earlier that leads to a graveyard of ivory next to an inland see. Jane doesn’t believe it’s validity, but as they continue their journey through the jungle, Parker begins to hear the roar of waves crashing. Just as the map says, there is an inland sea.

The group continues on, but Jane, however, decides to say back for a bit so she can take a sexy bath…alone; very smart in a wild jungle. She finishes up, but a lion decides to hang out on the beach to size her up. So Jane dives back into the water, which makes sense. The big kitty watches her intently until Tarzan gives his rebel yell, and walks over to it. He pets the big lug because they are both misunderstood softies.

A large wave smacks Jane upside her head; knocking her senseless. Tarzan jumps in for the save, but Jane mistakenly thinks he wants to pet her kitty too, and frantically tries to escape his clutches. Two gunshots suddenly pierce the humid air as Holt swoops in to scare off both the lion and the savage beast.

Later that night, Parker insists that Tarzan has a hard on for Jane. So he does what any father would do, he plans to kill his daughter’s suitor. Jane on the other hand, loves herself a good bad boy, and knows Tarzan is a much better fella for her than stuffy old Holt.

The expedition continues on, but unbeknownst to our crew, an unfriendly native tribe is following them from the bushes. When they kidnap Africa, Parker thinks Tarzan is to blame, and he doubles down on his hatred for the ape man.

He orders Holt to watch over Jane, but when she stops to refill her canteen at the river, Tarzan pulls her under the water before Holt knows what happened. He carries her through the jungle canopy; swinging from limb to limb like, well Tarzan, until Jane fires her gun as a warning to stop him. He drops her, and runs away.

Parker and Holt frantically try to locate her by shooting their guns in the air. She fires hers in reply, and waits by a tree for them to catch up. However, a large snake slithers over to her, and tries to strangle her. They both fall into the water, but Tarzan shows back up, and takes out the snake. He then grabs Jane, and carries her away until his arms are too tired to swing anymore. He falls to the ground, unconscious.

Like the Jungle Book, chimpanzees and orangutans surround Tarzan until an elephant lifts him up by his tusks and carries Tarzan to the nearest river. Jane follows, and rips part of her moist skirt off her body to bathe Tarzan. He’s so hunky!!!

Eventually Tarzan wakes, but he doesn’t understand the words coming out of Jane’s mouth. So they frolic with the other apes until sundown. Tarzan then takes Jane back to his nature pad for a nightcap.

The next morning, the two bathe because cleanliness is next to godliness, you know, and we need a reason for Tarzan to see Jane’s bare breasts. Holt will be so jealous! Jane confides to Tarzan that she’s still a virgin, and unless Tarzan has been getting his Congo Bongo on, he’s a virgin too!

Back at camp, Parker, Holt, and one of the guides lead search parties for Jane. The evil, evil hidden tribe is back, and they capture the guide’s search party. Parker and Holt meet back up on the beach. Jane is able to track them, and she soon arrives with Tarzan.

Parker goes to shoot Tarzan, but Jane stops him; allowing Tarzan to escape. She reveals that Tarzan didn’t take Africa, but then that evil, evil hidden tribe shows up, and surrounds them. The tribe manages to kill the other natives, and then kidnap Jane, Parker, and Holt. They take them via canoe to their village of the Ivory King (Steve Strong).

There, they tie up Parker and Holt, and then strip Jane bare as a sacrifice to the Ivory King. He will then rape her until she’s no longer a virgin. Enter stage right, the mighty Tarzan and his elephants to save the day.

They kill the guards which allows Parker to free himself. He attacks the Ivory King as he prepares to plow Jane’s jungle. The king manages to knock Parker over, and spear him with an elephant tusk.

Tarzan lets out another rebel yell, and swings into the camp where he fights the king to the death. The evil, evil native tribesmen watch the fight, but do not interfere. Eventually, Tarzan is able to snap the Ivory King’s neck in half.

Jane rushes over to her father, who is now mortally wounded. as he dies the two profess their love for each other. With Holt firmly in the friend zone, she asks him to tell the world that her father succeeded in finding the treasure. She then heads into the jungle with Tarzan where they will live off her large inheritance for the rest of their lives.

User Rating: Be the first one !
May 1, 2019
6 minutes read
Show More
Back to top button
Close
Close