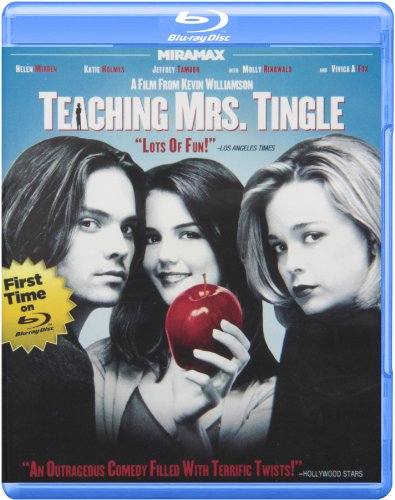 Echo Bridge Entertainment has announced that they will expand the Blu-ray availability of Teaching Mrs. Tingle this May. Currently, the film is available exclusively on Blu-ray through Best Buy.  Teaching Mrs. Tingle was written and directed by Kevin Williamson and stars Helen Mirren, Katie Holmes, Marisa Coughlan, Jeffrey Tambor, Michael McKean, Molly Ringwald, and Vivica A. Fox.  The film will be available everywhere beginning on May 7, 2013.

Teaching Mrs. Tingle is the story of Leigh Ann (Holmes), who is salutatorian when she needs to be valedictorian to get her scholarship to Harvard. The only class she is worse than the leader in is history, taught by Mrs. Tingle (Mirren), and the teacher hates her. When an attempt to get ahead in Mrs. Tingle’s class goes awry, mayhem ensues and friendships, loyalties and trust are tested by the teacher’s intricate mind-games.

The film was released in August of 1999 and grossed over $8 million at the box office.  Exact technical specs and supplemental features to be included with this upcoming release are yet to be officially detailed.

Disclaimer: Affiliate links are contained in this post. This means when you click a link, and purchase an item, Movie House Memories will receive an affiliate commission. Advertisers and Affiliate Partnerships do not influence our content. See our Terms of Use about the inclusion of affiliate links on this site for more information.
February 5, 2013
1 minute read
Show More
Back to top button
Close
Close