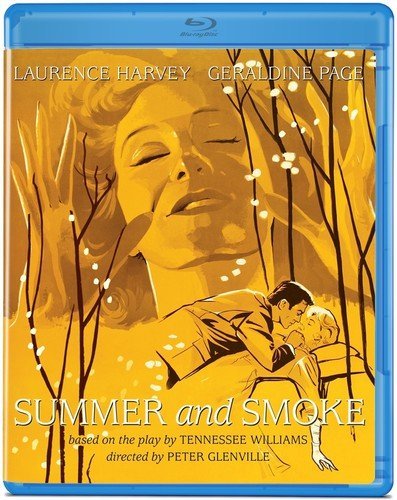 Olive Films has announced that it adding the romantic drama Summer and Smoke to their upcoming slate of Blu-ray releases. The film was directed by Peter Glenville and is based on a screenplay written by James Poe and Meade Roberts. The romance film starred Laurence Harvey, Geraldine Page, Rita Moreno, and Una Merkel. Summer and Smoke will be available for purchase in stores and online beginning on July 23rd.

Based on a play by Tennessee Williams (expanded from his one-act piece Eccentricities of the Nightingale). From childhood, Alma (Page) has loved John Buchanan (Harvey). Repressed by the pressure of a minister father and a mother who has never recovered for a nervous breakdown, she keeps these feelings bottled up. Her life becomes unbearable when John returns from medical school and takes up with the sultry Rosa (Moreno), the daughter of the casino owner who is as open and willing, as Alma is shy and repressed. Page delivers a smoldering, stellar performance, which won her the Golden Globe and the National Board of Review Best Actress Awards.

Disclaimer: Affiliate links are contained in this post. This means when you click a link, and purchase an item, Movie House Memories will receive an affiliate commission. Advertisers and Affiliate Partnerships do not influence our content. See our Terms of Use about the inclusion of affiliate links on this site for more information.
June 8, 2013
1 minute read
Show More
Back to top button
Close
Close