In a dark and sprawling city lives the tale of Terminal. It follows the interwoven tales of two assassins in a devious mission, a teacher battling a fatal illness, an enigmatic janitor, and a curious waitress who leads a dangerous double life. At the murderous consequences unravel in the dead of night, we find that all their lives are now at the mercy of a mysterious criminal mastermind hell-bent on revenge. 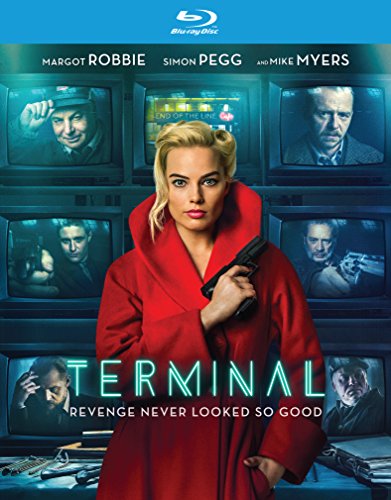 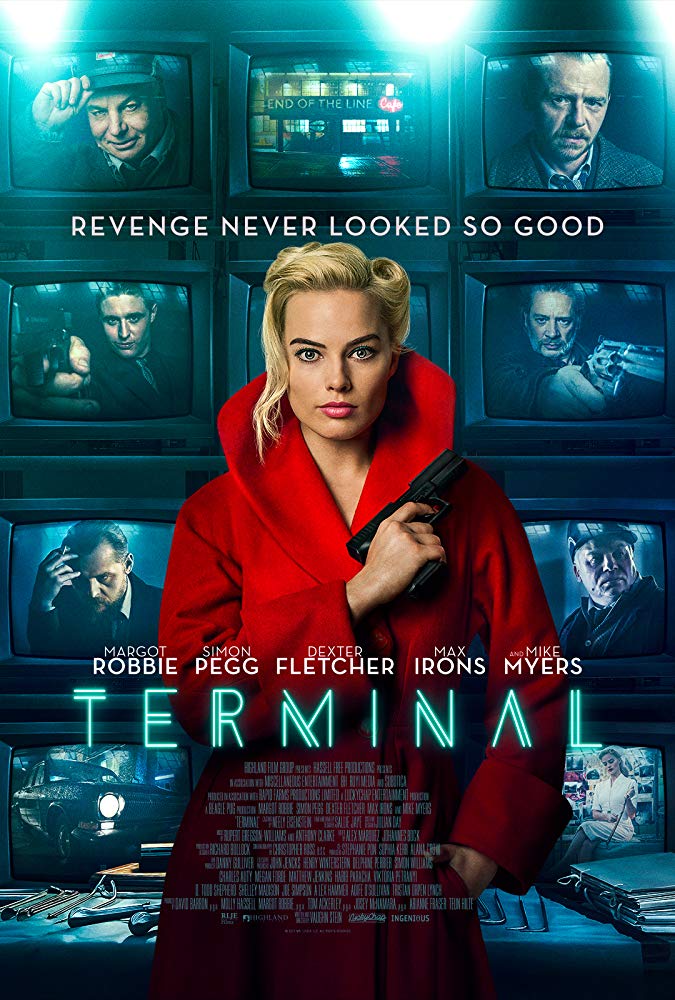 Terminal is a noir thriller about a young woman named Annie (Margot Robbie). She meets a mysterious employer in a confession booth and requests that he hire her as his sole contract killer. To prove her skill, she offers to kill the employer’s other contract killers. In exchange, the woman asks the employer if he can locate someone for her.

Next, we see Bill (Simon Pegg) standing on an empty platform in the middle of the night. He is approached by a cantankerous janitor named Clinton (Mike Myers), who informs him that another train won’t be arriving until 4:04 in the morning. The janitor suggests Bill kill his time in a nearby 24-hour café. Once inside, Bill meets a waitress named Annie (Margot Robbie) who is able to ascertain that Bill not only has a terminal disease, but that he is suicidal as well. The odd couple engage in a bizarre conversation in which Annie makes several suggestions as to ways that Bill could kill himself, none of which Bill finds satisfactory.

We then jump to a seedy hotel room where a hitman named Illing (Nick Moran) has been captured by Annie after she posed as a prostitute. Illing threatens Annie with her life, but Annie is not intimidated by the hitman and ultimately incapacitates and kills him.

Next, we see two hitman Alf and Vince (Max Irons and Dexter Fletcher) receiving a phone call from their employer Mr. Franklyn. Franklyn directs the pair to pick up a briefcase from the lockers at the train station terminal. After they do so, they take it to the Annie’s café and exchange it for a pack of matches and an envelope of money. The pack of matches is from a strip club that they travel to. Once there, they encounter a stripper who resembles Annie from the café.

The stripper takes their envelope of money as payment for passing on information about the hit that Franklyn wants them to undertake. The stripper flirts with the younger Alf, but rebuffs Vince’s come-ons. The two hitmen are told to wait in an apartment, and to shoot a person in the window opposite from them when they are specifically told to do so. Additionally, Vince receives individual instructions over the phone from Franklyn to kill Alf when the hit is complete.

Annie encounters Alf and warns him that Vince will try to kill him. She suggests that Alf should kill Vince once their hit is complete. Unbeknownst to both hitmen, they are observed via secret cameras by Mr. Franklyn.

Back at the train terminal, Annie takes Bill to an abandoned air shaft, and proceeds to try to talk him into jumping down the shaft. Bill approaches the edge and considers jumping, but ultimately decides that he can’t do it. Annie teases him, and Bill calls her a naughty girl. That phrase triggers a memory in Bill and he suddenly remembers his days as a school teacher and Annie. Back then, he had two girls in his class that he abused. Annie was one of the girls and she has come back for revenge. She stabs Bill in the neck with a pen and throws his body down the air shaft.

Meanwhile, Mr. Franklyn calls the hitmen’s apartment after two weeks of them waiting. He directs them to be ready to take the shot. Vince grabs the rifle and begins looking out the window into the other apartment. When he sees Annie in the other apartment on the phone he knows something is up. However, it is too late since Alf already has a gun to Vince’s head. Annie comes to the apartment and the new couple kill Vince. They leave the apartment just as Clinton, the janitor, is coming to clean up the murder scene.

Once again, back at the terminal, Annie turns on Alf and kills him. Clinton shows up again to clean up the body. Annie decides to help Clinton take care of the bodies and assists him in taking the two hitmen’s bodies to top of the air shaft and dropping them in.

We then watch as Clinton returns to the terminal and enters the janitor closet. The closet is actually Mr. Franklyn’s control center. The janitor is revealed to be Mr. Franklyn in disguise, as he removes his prosthetic bad teeth and fake skin. Franklyn stops the janitor’s limp and begins walking normally. There are dozens of attaché cases lined up around the lair for future jobs. Franklyn talks to Annie over the phone and tells her is impressed with her work and that she has proven her value to him.

As Franklyn leaves his lair, he runs into Annie and her suddenly revealed twin, Bonnie (Margot Robbie). The twins tie up Franklyn and describe to him how their mother died. The twins’ mother is a former partner to Franklyn who had engaged in a sexual relationship with him. The result of which was the birth of Annie and Bonnie. The twins’ mother had the misfortune of being a witness to one of Franklyn’s murders. The mother fled the scene and ran back to her home to protect her twin girls.

Franklyn came to the home and poured gasoline around the house and set it on fire. The mother was able to get the twins out of the burning house, but she unfortunately died. After that, the twins were sent to an orphanage where they were both molested by Bill. To get their revenge, Annie and Bonnie lobotomize Franklyn before ultimately killing him. The twins then walk out of the terminal together, their quest for revenge fulfilled.