In Terminator: Dark Fate, decades after Sarah and John Connor prevented Judgment Day, a new lethal Terminator arrives to eliminate the future leader of the resistance. In a fight to save mankind, Sarah teams up with an unexpected ally and an enhanced super soldier to stop this deadliest Terminator yet. Humanity’s fate hangs in the balance! 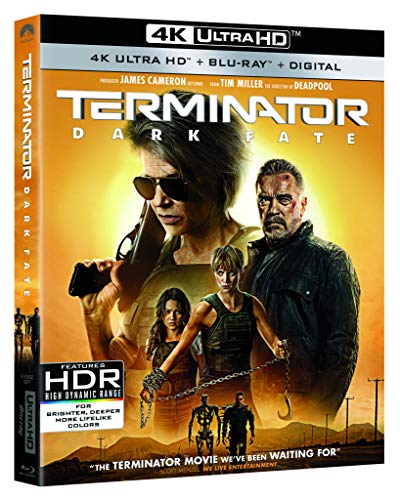 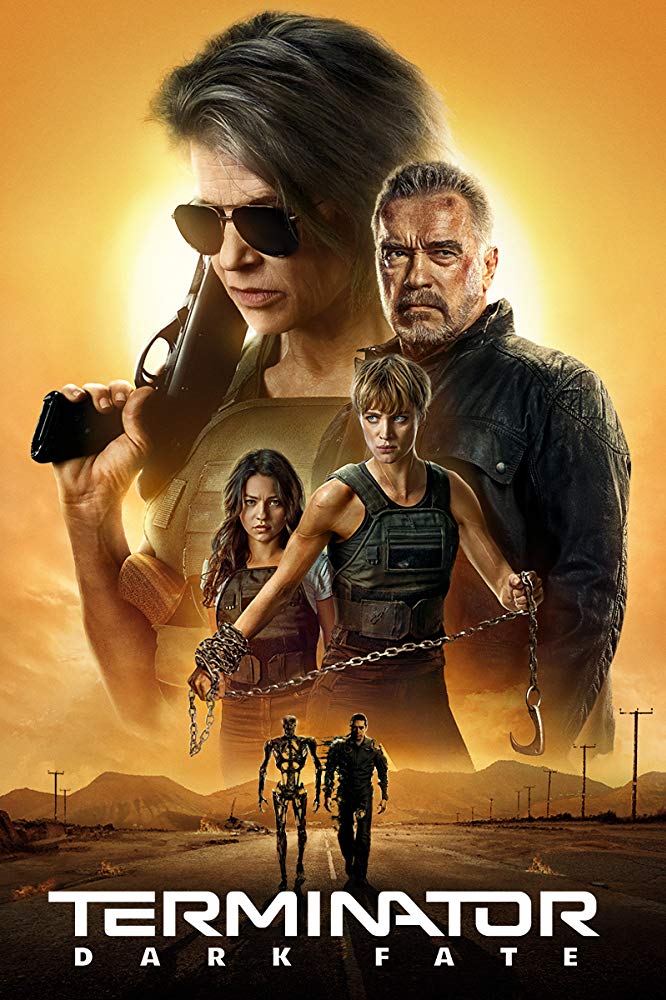 Terminator: Dark Fate begins in the year 1998. It has been three years since Sarah and John Connor (Linda Hamilton and Edward Furlong) destroyed Cyberdyne and prevented the creation of Skynet. Mother and son are living on beach in Livingston, Guatemala when they are approached and attacked by a T-800 Terminator (Arnold Schwarzenegger). The Terminator shoots and kills John Connor before walking away, leaving Sarah Connor alone cradling the body of her dead son.

The film then skips to present day Mexico City. We see a naked woman by the name of Grace (Mackenzie Davis) materialize from the future in the middle of a bridge. Dazed and injured, a Hispanic couple helps her before the police come to harass them all. Feeling threatened, Grace quickly takes out the officers in an inhuman way. She just as quickly takes the clothes of the Hispanic man who was helping her and sets out on her mission.

The next day, an advanced Terminator, called the Rev-9 (Gabriel Luna), materializes in an apartment complex where a woman by the name of Daniella “Dani” Ramos (Natalia Reyes) lives. Similar to a T-1000, he quickly forms clothes on his body and goes to Dani’s apartment. Dani is at work, but Dani’s father answers the door and is suspicious of the man.

Next, we see Dani going to work with her brother Diego. Diego is in trouble at work again, and Dani is trying to save her brother’s job. The Rev-9 shows up impersonating her father. When the Rev-9 tries to kill Dani, Grace reveals herself and protects Dani. Grace reveals herself as a cybernetically enhanced soldier, who is not quite human, but not quite Terminator as well.

Grace is able to get Dani and Diego out of the factory, but the Rev-9 quickly follows them. As usual in a Terminator film, a car chase ensues and the Rev-9 eventually catches up to the heroic trio. The Rev-9 reveals that it can separate itself into two distinctive Terminators, a wholly mechanical portion and a liquid metal portion. Diego is killed by the Rev-9, and Dani and Grace are pinned on a bridge when Sarah Connor suddenly shows up and blows up both portions of the Rev-9, temporarily disabling the machines and giving Dani and Grace an escape route.

Dani, Grace, and Sarah retreat to a motel so Grace can recover, as her cybernetic enhancements require her to take a plethora of medications to keep her operational. The embittered Sarah Conner reveals that she timely showed up on the bridge due to being told to be there.

She informs Grace and Dani that since her son’s death she has been receiving periodic texts with GPS locations where Terminators are arriving from the future. Then, she shows up at the locations to destroy the Terminators. Sarah also has no idea who is sending the messages and that the messages always end with “For John”.

Grace uses her cybernetic enhancements to examine Sarah’s phone to reveal that the messages are being sent from Laredo, Texas. Oddly, she also has a tattoo given to her in the future with GPS coordinates for the same location in Laredo. They are to be used as a fallback position to retreat to if anything goes wrong during her mission.

Grace also informs Dani and Sarah that neither Skynet nor John Conner exist in her timeline. Instead, humanity is threatened by a different artificial intelligence named Legion. Grace tells them that her mission is to protect Dani because she is vital to the success of humanity in the future.

The trio begin their trek north to Laredo, barely escaping the Rev-9 and the legitimate authorities when they are captured at the border. Once they get to Laredo, they discover “Carl” (Arnold Schwarzenegger) at the coordinates. Carl is the T-800 unit that killed John Connor twenty-two years before. After his mission was complete, he took on a normal life as a blinds salesman, and continued to follow his programming of adapting and becoming more human.

After the many years, Carl has developed the T-800 equivalent of a conscience. Carl reveals that he can detect the appearance of Terminators through time, and he has been the one sending the messages to Sarah in the hopes that it would give her new purpose, much like he found his new purpose.

Carl offers to join Grace and Sarah in their mission to protect Dani. They begin making preparations to destroy the Rev-9 and ultimately conclude that the best way would be to use a military grade electromagnetic pulse (EMP). Sarah fortunately knows a military officer who maybe able to get his hands on one. When they show up to pick up the EMP, the Rev-9 reacquires them in a helicopter.

Dani, Grace, Sarah, and Carl take control of a military cargo plane to make their escape. The Rev-9 is able to damage the plane and get onboard during midflight. Grace, Sarah, and Dani are able to get onto a Humvee that is loaded for an air drop and parachute out of the plane, while Carl and the Rev-9 battle. Both the Humvee and the plane crash near a hydro-power plant.

With the EMP lost, the group decides to make their last stand inside dam. Grace is severely damaged and tells Dani to use her power core to destroy the Rev-9, a sacrifice that will kill Grace. Dani is able to get the power core into the mouth of the Rev-9 and Carl attempts to throw the Rev-9 into the well of the generator before it explodes.

Unfortunately, Carl is also pulled into the well as well and becomes impaled on some protruding rods next to the Rev-9. As the power core begins to explode, Carl turns to Sarah and says “For John” before he and the Rev-9 are destroyed, leaving Sarah and Dani as the last two survivors.

Sometime later, Dani and Sarah watch a ten-year-old Grace on a playground playing with her family, blissfully unaware of her dark future. Dani says that she will not let her die again, and Sarah tells her that she needs to get ready. The two drive off into the dark future that awaits them.