Based on the Charles Addams’ cartoon and the 1960s television series, The Addams Family brings the macabre family to the big screen. Fester Addams has been missing for 25 years, and his brother Gomez mourns his absence. When Fester suddenly reappears, along with his “doctor,” the Addams Family is elated. However, Fester and his doctor are con artists looking to swindle Gomez out of the family fortune. Will Gomez figure out the con before he loses everything, or will the Addams Family win over the hearts of the fake Fester? 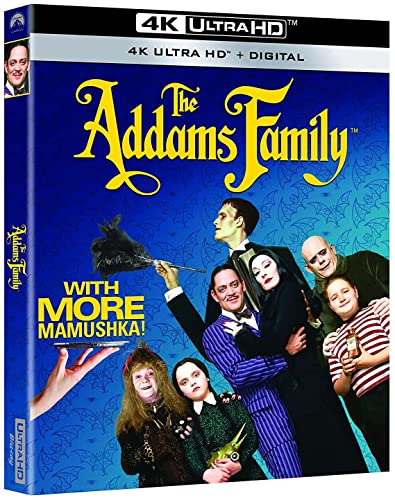 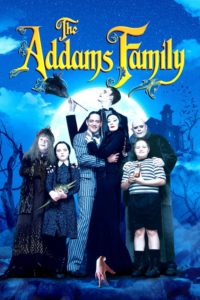 As the film begins, Gomez Addams (Raul Julia) is in a state of depression as he laments the 25th anniversary of the disappearance of his brother Fester. The two had a falling out after Gomez tried to steal away Fester’s girlfriends, the conjoined twins Flora and Fauna Amor (Maureen Sue Levin and Darlene Levin), years before Gomez met his future wife Morticia (Angelica Huston). Gomez entertains himself by torturing his long-suffering attorney Tully Alford (Dan Hedaya) who looks to bilk more money out of his client to pay for his own gambling debts. When Tully returns to his office, loan shark Abigail Craven (Elizabeth Wilson) is waiting for him with her adopted son Gordon (Christopher Lloyd). Gordon resembles Fester, and Tully proposes that Gordon pose as Fester to infiltrate the Addams’ mansion and find the hidden vault where they keep their money.

A few days later, Tully and his wife Margaret (Dana Ivey) attend a séance at the Addams’ mansion which is led by Grandmama (Judith Malina). They attempt to contact Fester’s missing spirit. Gordon arrives in the middle of séance, posing as Fester. Abigail also plays along posing as Fester’s German psychiatrist, Dr. Greta Pinder-Schloss. Abigail tells the Addams family that Fester had been lost in the Bermuda Triangle for the past 25 years until she found him in some tuna nets.

Gomez is elated to have his brother back and almost immediately takes Gordon to the family vault to watch home movies of their childhood. Gomez apologizes to his brother, and Gordon, having no memory of the incident, tells him that all is forgiven. However, Gomez begins to suspect that Gordon is an imposter when he is unable to recall vital details about their past together. Gordon attempts to reenter the vault whenever he can get away alone but cannot figure out the complicated Addams’ booby traps. Suspicious, Morticia reminds Gordon of the importance of family to the Addamses and of their vengeance against those who cross them. Abigail responds by assuring the family that their collective suspicions of Fester are due to displacement.

As time passes, Gordon continues to grow closer to the Addams family, particularly the children Wednesday (Christina Ricci) and Pugsley (Jimmy Workman). Gordon frequently engages in bizarre child’s play with the kids and takes extraordinary joy in doing so. He even helps them prepare a gruesome swordplay sequence for a school play. Abigail continues to push Gordon to access the vault and orders him to not attend the play. However, Gordon disregards his mother and attends anyway.

After the play, Abigail insists that Gordon needs to return with her to the hospital to continue his treatment. Morticia and Gomez insist on throwing a large party with their extended family and friends. During the party, Abigail plans to break into the vault. Wednesday overhears Abigail and Gordon discussing the plan. She escapes the crooks by running and hiding in the family cemetery. The Addams family goes out and searches for Wednesday, whom they find asleep in a crypt. At the same time, Tully finds out the Fester is the older brother, and the entirety of the family fortune, including the mansion, are his. Tully arranges with Judge George Womack (Paul Benedict), the Addams family’s long-suffering neighbor, to issue a restraining order that prevents Gomez and his family from living in the mansion.

With the family away, Abigail, Gordon, and Tully make several unsuccessful attempts to get past the booby traps blocking access to the vault. Meanwhile, the Addamses are forced to live in a run-down motel and seek jobs for the first time. Morticia tries to become a preschool teacher, Wednesday and Pugsley sell toxic lemonade, and Thing (Christopher Hart) becomes a FedEx delivery hand. Gomez falls into a deep depression and obsesses over Gilligan’s Island reruns.

Concerned for the mental well being of her husband, Morticia returns to the Addams’ mansion to confront Gordon. Abigail and Tully decide to kidnap and torture her in the hopes that she will reveal the way past the vault’s booby traps. Thing spies and sees Morticia’s capture. He returns to the motel and informs Gomez. Gomez rushes to the mansion to save his wife. He engages Tully in a sword fight before Abigail forces him to surrender by threatening Morticia’s life. Gomez agrees to surrender the family fortune in exchange for Morticia. Gordon grows tired of being berated by Abigail and turns against her. Using a magical book which projects its contents into reality, he unleashes a hurricane into the house. Tully and Abigail are thrown out of the mansion by the wind and land in two open graves dug for them by Wednesday and Pugsley. Gordon is struck in the head by lightning and collapses on the floor.

Seven months later, the Addams family prepares to celebrate Halloween. They discuss how Gordon was really Fester all along, his memory being restored by the lightning strike. Fester had been suffering from amnesia for 25 years after being lost in the Bermuda Triangle, just as Abigail had stated. Lurch (Carel Struycken), Wednesday, Pugsley, Thing, Grandmama, and Fester all engage in a game of “Wake the Dead” while Morticia informs Gomez that she is pregnant.