After someone blows up his successful nightclub to flaming bits, Pluto and his little gang traverse the moon looking for clues to the arsonist. The journey leads Pluto, Bruno, and Dina from seedy motels to Pluto’s secret hideout to the casino of the most powerful man on the moon. Eventually Pluto discovers that his club’s destruction might have been of his own doing. 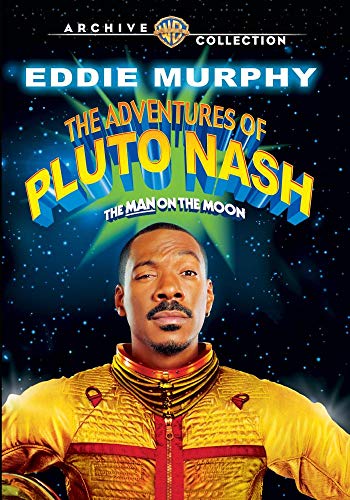 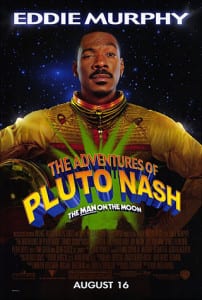 The Adventures of Pluto Nash is Casablanca meets Total Recall (the Schwarzenegger version) meets a pile of poop with a twist…it’s set on the moon circa 2080; not Mars 2084. Eddie Murphy is fresh out-of-jail smuggler named Pluto Nash who becomes the most successfully nightclub owner in the spaceport known as Little America.

After seven years, the aptly named “Club Pluto” attracts the attention of the vile mobster named Rex Crater who want to expand his gambling empire by taking over Pluto’s club. Pluto says, “No.” Crater’s hired thugs say, “Yes.” Pluto again says, “No.” The thugs say, “We insist.” Pluto says, “Oh, hell no,” and the thugs decide to burn that mofo down.

Pluto flees with his newest skank waitress, Dina Lake, and Bruno, his obsolete bodyguard played by Randy Quaid. He’s a robot with a 110 volt hard on anytime an electric lady walks by.

Pluto hatches a plan to find Rex Carter, and after some predictable detective work, he finds Rex in the city of Moon Beach, oddly on the top floor of his own casino. Pluto is promptly captured by Rex, and learns that he was wrong about everything he assumed about Rex. Not only that, REX IS REVEALED TO BE PLUTO’S CLONE, and they are wearing the EXACT same outfit that night!

Cue up the predictable fist fight witnessed by gun-wielding cronies who don’t know which person to shoot. If you guessed that they shoot the wrong guy, you’re right! Pluto wins. He get’s the girl. He gets the club, and he gets a contract for another shitty sci fi movie; 2008’s Meet Dave.