We have always known that Spider-Man’s most important conflict has been within himself: the struggle between the ordinary obligations of Peter Parker and the extraordinary responsibilities of Spider-Man. But in The Amazing Spider-Man 2, Peter Parker finds that his greatest battle is about to begin. It is great to be Spider-Man. For Peter Parker, there is no feeling quite like swinging between skyscrapers, embracing being the hero, and spending time with Gwen. But being Spider-Man comes at a price: only Spider-Man can protect his fellow New Yorkers from the formidable villains that threaten the city. With the emergence of Electro, Peter must confront a foe far more powerful than he. And as his old friend, Harry Osborn, returns, Peter comes to realize that all his enemies have one thing in common: Oscorp. (Courtesy of Sony Pictures Entertainment) 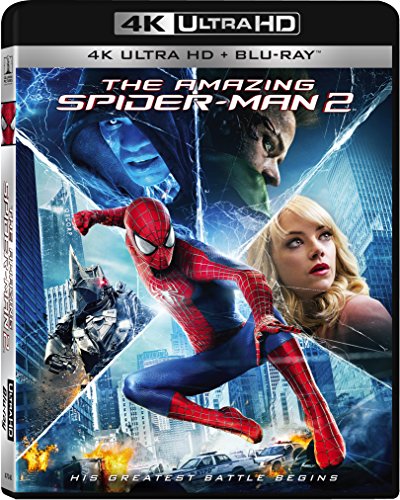 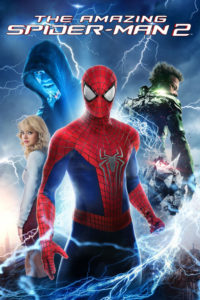 The film begins in the past. Oscorp scientist Richard Parker (Campbell Scott) records a video message explaining his disappearance. The film relives the moment that Richard and his wife Mary (Embeth Davidtz) leave their young son, Peter (Max Charles), with his Aunt May (Sally Field) and Uncle Ben (Martin Sheen). They then get on a private plane that is hijacked by an assassin. Richard and Mary fight the man, but the struggle causes the plane to crash, killing everyone on board.

Then, in the present day, a teenage Peter Parker (Andrew Garfield) continues his dual life as crime fighter Spider-Man and high school student. Peter is late to his own high school graduation due to trying to stop Aleksei Sytsevich (Paul Giamatti) from stealing some plutonium. He eventually makes it to the ceremony, although he misses Gwen Stacy’s (Emma Stone) valedictorian speech. Peter has broken his promise to Gwen’s deceased father, Captain George Stacy (Denis Leary), to stay away from Gwen for fear of putting her in danger from Spider-Man’s enemies. Peter feels guilty about it and waffles on whether to continue their relationship. Eventually, Gwen grows tired of Peter’s uncertainty and breaks up with him.

Not long afterwards, Peter’s childhood friend, Harry Osborn (Dane DeHaan), returns to Manhattan to see his terminally ill father Norman (Chris Cooper), the CEO of Oscorp. Norman explains his illness is genetic and that Harry is likely to have the genetic disease as well. Norman gives Harry a small device he claims contains his life’s work. The next day, Norman dies, and Harry ascends to the position of CEO of Oscorp.

At the same time, mild-mannered Oscorp electrical engineer Max Dillon (Jamie Foxx) has an accident at work and falls into a large tank with genetically engineered electric eels. The eels attack Max which mutates the engineer into a living electric generator. Max escapes the tank and begins to walk the streets of New York. Nearby, Peter tries to maintain a friendship with Gwen. They spend sometime together, but their moment alone is interrupted by Max appearing in Times Square just as Gwen reveals that she may move to England if she earns a scholarship to Oxford University. Max inadvertently causes a blackout. Spider-Man arrives and although Max believes they have a friendship, the two have a brief battle after Max fails to control his powers. Spider-Man subdues Max who is taken away by law enforcement and placed at the Ravencroft Institute where he is studied, and tortured, by German scientist Ashley Kafka (Marton Csokas).

I once told you that secrets have a cost. The truth does too. Aunt May Parker (Sally Field)

Meanwhile, Peter and Harry resume their friendship, unaware that their fathers were working on a project together. Eventually, the first symptoms of Harry’s illness begin to show, and he uses the device Norman gave him to deduce that Spider-Man’s blood could help him. Harry asks Peter, who he knows sells photos of Spider-Man to the Daily Bugle, to aid him in finding Spider-Man. Peter refuses, personally afraid that the transfusion could cause a mutation in Harry like the one suffered by Dr. Curt Connors (Rhys Ifans). Harry remains persistent, and Peter revisits Harry as Spider-Man and still refuses. Harry becomes frustrated and angry, but his obsession with Spider-Man blinds him to a corporate takeover created by Oscorp vice-president Donald Menken (Colm Feore). Menken frames Harry for covering up Max’s accident and has him removed as CEO and takes control of Oscorp. Harry’s loyal assistant, Felicia Hardy (Felicity Jones), informs Harry that Oscorp has special equipment that could help him with his situation in their Special Projects Division. Harry breaks into Ravencroft and proposes a deal with Max to get back at Spider-Man. Harry frees Max who takes on the identity of Electro.

After Electro kills Dr. Kafka, Harry, and Electro head to Oscorp. They threaten Menken into giving them access to the Special Projects Division. In the sealed vault, Harry finds vials of the venom from the now-destroyed genetically altered spiders, unaware that Richard Parker altered them to only work with his DNA. Harry injects himself with the venom believing that it will cure him. However, it begins to alter his genetic code and speeds up his illness. To save himself, he places himself into a specially designed suit of armor that restores Harry’s health.

At the same time, Peter uses information left by his father to locate Richard’s hidden lab in an abandoned subway station. In a video, Richard explains that he had to leave because he refused to cooperate with Norman’s plans to make biogenetic weapons. Peter then hears a voicemail from Gwen informing him that she was offered the Oxford scholarship and is heading to the airport earlier than expected. As Spider-Man, Peter catches her and professes his love for her. The couple agree to go to England together.

At that moment, Electro causes another blackout by taking over a power station. Peter heads off to battle him and webs Gwen up so that she cannot follow. Nevertheless, Gwen frees herself and heads to the power station. Working together, Gwen and Peter overload Electro’s body, killing him. The Goblin arrives in his armor and with his weapons. Upon seeing Gwen, the Goblin concludes Spider-Man’s secret identity. Still angry over the refusal for the blood transfusion, the Goblin kidnaps Gwen and takes her to the top of a clock tower.

Spider-Man and the Goblin battle. Spider-man stops the Goblin, but Gwen is knocked from the top of the tower. Spider-Man catches her with his web, but the resulting whiplash snaps Gwen’s neck, killing her. Peter is devastated over the loss of Gwen. He gives up being Spider-Man. Five months later, Harry is locked up at Ravencroft where he is treated for his transformation. He receives a visit from Gustav Fiers (Michael Massee) who asks Harry for instructions. Harry discusses forming their own team and orders Fiers to start with Sytsevich.

Later, Sytsevich is broken out of prison and given a special electromechanical suit from the Oscorp Special Projects Division that takes the form of a rhino. Sytsevich terrorizes the city as he rampages through the streets. Peter finally sees a video of Gwen’s graduation speech which inspires him to move on. He returns to being Spider-Man and confronts the charging Sytsevich as the film ends.