Morris Buttermaker is an ex minor league pitcher who’s now a lazy, beer-chugging, swimming pool cleaner on the verge of bankruptcy when he takes money to coach a kids baseball team called the Bears. Since these misfits have little to no baseball talent, Buttermaker recruits his ex-girlfriend’s daughter, Amanda Whurlizer, who’s an ace pitcher, to pick up the slack. He also uses her looks to recruit Kelly Leak, a juvenile delinquent who just so happens to be the best player in town. Now full of talent, these young kids hope to win the championship game against their nemesis, the Yankees… but at what cost? 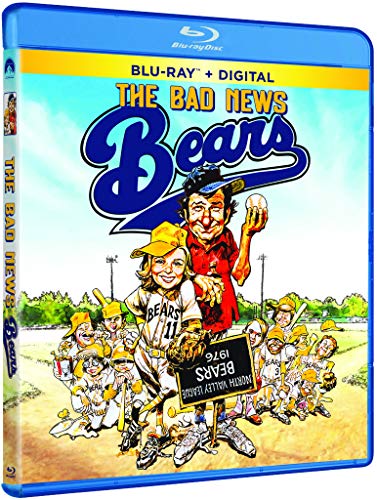 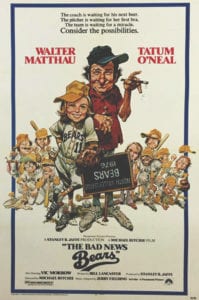 Bob Whitewood hires Morris Buttermaker, a former minor-league baseball pitcher and current alcoholic pool cleaner, to coach the Bears; a last-minute addition to a Little League baseball team in Southern California. The Bears are composed of the worst kids around with no baseball skills. The only reason they have a team is because of a settlement of a lawsuit Whitewood brought against the league.

Buttermaker’s team is bad. Pitcher Rudy Stein is near-sighted. Catcher Mike Engleberg spends more time eating than playing. Shortstop Tanner Boyle cusses like a drunken sailor, and gets into fights like one too. Ahmad Abdul Rahim wants to be the next Hank Aaron, but can’t hit, can’t catch, and can’t run. Timmy Lupus is a booger-eating spaz who gets picked as much as his nose. There’s a few Mexican immigrants thrown in with some other kids to round out the team. This team is so bad, only Chico’s Bail Bonds will sponsor this team.

In their opening game, the Yankees open up a can of whoop ass on the Bears, and Buttermaker forfeits the game after the Yankees score 26 runs in the first inning. Humiliated, the team quits the next day. Buttermaker yells at them, and says quitting is a habit they don’t want to start. He then orders them to get their asses on the field.

The next game arrives. The Bears get pounded 18-0. So, Buttermaker decides to recruit his ex-girlfriend’s daughter, Amanda Whurlitzer, to pitch. The team gets better, but not by much. After Lupus drops a fly ball, the team loses again. Angry little Tanner tries to fight him, but Buttermaker breaks it up, and gives the boys a “team wins” and “team losses” speech; something he will later forget himself.

The next day, Tanner witnesses Joey Turner, the Yankees star pitcher, bully Lupus, and he sticks up for him. Joey throws Tanner in a trash, but Lupus thanks Tanner for helping.

Buttermaker still needs better players, so he uses Amanda as bait to recruit Kelly Leak, a troubled loner who’s the best athlete in the area. Kelly joins the team after a confrontation with Coach Turner, and the Bear’s chances of winning improves immediately.

The Bears win a few games once Kelly joins, but in his quest to get to the championship game, Buttermaker orders Kelly to catch everything that comes his way. The other kids are resentful towards Kelly, so he stops hogging the ball; pissing off Buttermaker. At his next at bat, Kelly decides to watch the pitches fly by, and gets two strikes; pissing off Buttermaker even more. On the last pitch, Kelly hits the ball out of the park, and sends the Bears to the championship.

After that game, Amanda, wanting a real family, pushes Buttermaker to spend more time with her and her mom. Buttermaker balks, and Amanda walks off; crying.

On championship day against the rival Yankees, the boys gang up on Kelly for his ball hogging, but Buttermaker breaks it up. (The man does a lot of breaking up in this film.) He lets it be known that he was the one who told Kelly to hog the ball. This revelation upsets them boys who feels Buttermaker betrayed them.

The championship game begins on this wonderful note, and Buttermaker and Coach Turner shout at not only each other, but their players as well. They push their players to the brink in order to beat the other coach. After Amanda takes a cheap shot to the chest, Buttermaker orders Rudy to lean into the strike zone to get hit by the pitch; increasing the number of players on base.

The tension culminates when Turner slaps his son, Joey, on the mound after his pitch nearly takes off Bears catcher Engelberg’s head. The very next pitch, Engelberg hits a ground ball to Joey, but Joey, still smarting from that slap, just stands there with the ball in his hand. Engelberg scores. Angry, Joey then walks off the field with his mother and her sweet 70s ass (sponsored by Jordache Jeans)!

But back to the game! Buttermaker orders Rudy to let another pitch hit him, but he refuses, and takes a swing at the ball. He grounds out. Furious, Buttermaker yells at both Rudy and his team for playing like they don’t want to win the championship. This berating demoralizes the team even more, and Buttermaker realizes in his quest to beat Turner, he’s become Turner.

Realizing the error of his ways, Buttermaker replaces his starters with his benchwarmers; forsaking the championship so that everyone can play. However, the benchwarmers still suck. Even with a last-minute rally, the Bears…spoiler alert here…the Bears lose the game. The Yankees take home the big championship trophy.

Even though the Bears lost, they didn’t really lose because they came together as a team; a more valuable life lesson. Buttermaker gives each boy a celebratory beer from his cooler, and makes up with Amanda.

The teams meet back on the field for the trophy ceremony. There, the Yankees give the Bears a backward apology, and congratulate them on the game. Lupus finally speaks up for himself, and throws their second-place trophy at the Yankees; yelling, “Wait until next year,” but I’ve seen the sequel. It can wait.

The Bears then celebrate on home plate like they won the championship; spraying beers on each other as their parents come and congratulate their boys. They act like nine year olds with beers are a normal thing at their house… well, this is the 70s, so actually it is.