In The Benchwarmers, the owner of a minor landscaping service company named Gus spots a group of baseball players bullying an athletically awkward boy named Nelson, he defends the kid. A paperboy named Clark then tells them that he and his pal Richie have never played baseball. So, Gus invites them to play later that afternoon. However, the bullies show up and challenge them to a game. The bullies whip them. Nelson’s millionaire father invites Gus, Clark and Richie to form a team called The Benchwarmers. Soon they become the sensation of the league, with a legion of outcast cheering for the team. However, things turn dark when everyone learns about Gus’ behavior during his childhood. It affects the team and fans alike. 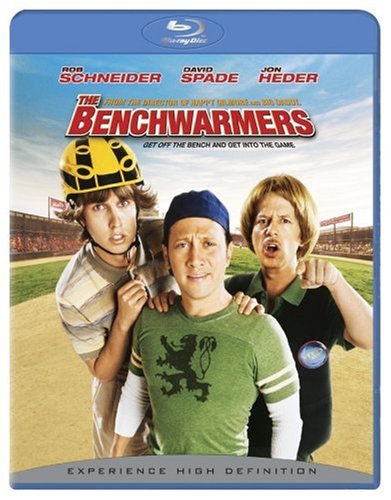 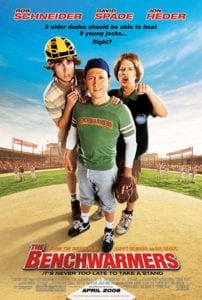 In The Benchwarmers, Landscaper, Gus Matthews, and paperboy, Clark Reedy, rescue a boy named Nelson from bullies on a baseball field. Clark tells Gus that he was always on the bench as a kid because of his lack of athleticism. Gus decides that he, Clark, and their friend Richie, who’s also athletically awkward, are going to play a game of pickup. While Clark and Rickie are terrible at baseball, Gus excels at it. Gus challenges the bullies to a game when they return to reclaim their field, and the trio easily beats them.

The wins gives Clark and Richie much needed confidence, and the two visit a sports store to purchase new gloves. Their childhood bully, Brad, manages the store, and he challenges them to a game of baseball. Gus, Clark, and Richie defeat Brad’s team handily.

The wins attract the attention of Nelson’s billionaire father, Mel. He sponsors these Benchwarmers in a series of games against all the bully ball clubs in state. The winner of this “tournament” gets exclusive use of a new multimillion-dollar baseball park Mel builds in 24 hours time.

The Benchwarmers win game after game, which inspires nerds of all ages and some very hot moms. Mel hires Reggie Jackson to help improve their skills, but the remaining bully teams join forces to stop the Benchwarmers.

The win sets up the finale between The Benchwarmers and Jerry’s team who are the original bullies of the movie. The day before the game, Jerry reveals to the world that Gus is himself a bully. Gus apologizes to Marcus, the boy whom he tormented into an mental institution. With everything now right in the world, Marcus makes a passionate speech about forgiveness at the game the next day. Everyone forgives Gus, and the team accepts him back.

Gus, Clark, and Richie decide not to play the final game. Instead, they invite their young nerd fans to play in their place, so they know what it’s like to compete. Jerry’s team destroys the nerds, but they give up because they are tired of Jerry’s bullying too. They let Nelson hit the ball, and score a run. Everyone wins this day!

The Benchwarmers storm onto the field like they have just won the world series. Jerry is bullied with a wedgie on the fence, and then everyone heads over to Pizza Hut. Gus, Richie, and Clark all kiss hot blonds they’d never have a chance with in the real world. Gus announces he’s going to be a father, and Pizza Hut gets their final product placement of the film.