The Best Little Whorehouse in Texas is an inspired tale of the story behind the demise of the real-life Chicken Ranch. When a big TV crusader Melvin P. Thorpe threatens to expose the Chicken Ranch to public scandal and close it down, Miss Mona doesn’t go down without a fight. With the help of Sheriff Ed Earl Dodd, the two join together to keep it open and they find romance along the way. 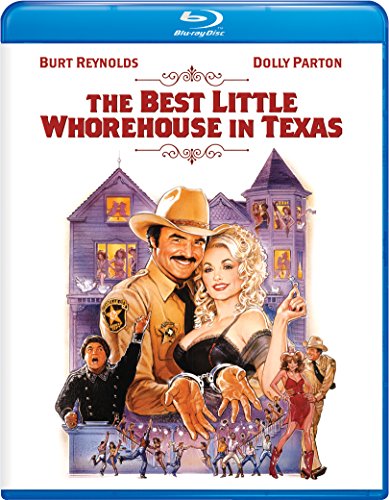 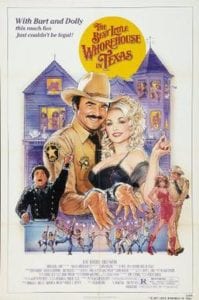 The Best Little Whorehouse In Texas is the rare 80’s musical that appeals directly to an adult audience. This blend of West Side Story and Debbie Does Dallas brings 80’s icons Burt Reynolds and Dolly Parton together as the film duo that you didn’t know that you wanted to see.

Reynolds plays Sheriff Ed Earl Dodd, who quietly keeps the peace in the sleepy Texas town of Gilbert. Just outside Gilbert is the infamous “Chicken Ranch”, a brothel that has serviced the men in Texas for generations. Parton plays Miss Mona, the madam who oversees the “Chicken Ranch”. Ed Earl, as well as the citizens of Gilbert, have turned a blind eye to illegal activities going on at the Ranch.

In fact, they are encouraging of the activities, as Miss Mona often supports many of the town’s activities and charities in addition to collecting all the town’s cherries. Unbeknownst to the citizens of the town, Ed Earl and Mona have a secret romantic relationship that has been going on for decades. The two often get together for a little afternoon delight, free of charge of course, while maintaining an outside appearance of professionalism.

However, trouble is brewing in the big city. A television personality with a rug on his head and a sock in his pants, Melvin P. Thorpe, intends to do a segment about the Ranch and the town that has ignored the immoral activities at Miss Mona’s place. When Ed Earl drives up to dissuade Thorpe from doing the story, the investigative reporter takes the opportunity to publicly embarrass Ed Earl on live television and announce the presence of the Chicken Ranch to a general audience.

In the town of Gilbert, Ed Earl is being pushed into a corner. The town elders want Ed Earl to shut down the Ranch, temporarily, until the television attention drifts elsewhere. Ed Earl is stubborn and hates to be told what to do. Additionally, he is trying to protect his lover and maintain his belief that he is Miss Mona’s hero. Ultimately, Ed Earl gets Mona to agree to shut down for a while.

However, Mona has forgotten the big game between the Texas Longhorns and the Texas A&M Aggies, which the winning team gets a free celebration party at the Chicken Ranch. Mona goes back on her word to Ed Earl and agrees just to host the football party.

However, Thorpe and his cameras show up the night of the party and catch the Ranch entertaining the football team as well as a Texas senator. Ed Earl shows up just as Thorpe is making his getaway. Now, Thorpe has his video, and Ed Earl and Mona are at each other’s throats due to Mona lying to Ed Earl. Mona calls Ed Earl chicken shit, and Ed Earl calls Mona a whore, and the two part company, likely for good.

Despite his anger at Mona, Ed Earl heads to Austin to see the Governor of Texas, and implore him to support keeping the Chicken Ranch open. The Governor is a true politician and wants to side step the issue as much as possible, at least until the public opinion poll comes in. At that point, with a majority of people in favor of closing the Ranch, the Governor orders Ed Earl to shut it down. That night, Ed Earl calls Mona and tells her that she is closed for good. When Mona tells her girls that they are closed, they inform her that Ed Earl went to the Governor to try and keep them open, something Mona was unaware of.

As Mona is leaving the Ranch for good, Ed Earl shows up and asks her to marry him. She turns him down, telling him it would ruin his political aspirations. She then sings some lame Whitney Houston song to him, as if that was going to make him feel better. However, Ed Earl is not a man who takes “no” from a woman, as most male leads were pre-1990. Ed Earl proceeds to throw her luggage into the back of his truck and then grabs Mona and carries her to his awaiting chariot, likely throwing out his back for the rest of his film career.